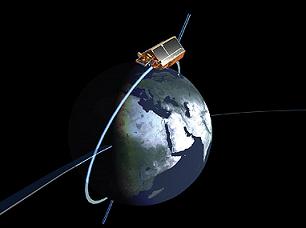 An International Space Company (ISC) Kosmotras Dnepr launch vehicle has launched the European Space Agency’s CryoSat 2 Earth observation satellite from an underground silo at the Baikonur Cosmodrome in Kazakhstan. CryoSat-2 – lifted off at 15:57 (CET) – is a replacement for another spacecraft that was lost in 2005.

Dnepr is a converted SS-18 intercontinental ballistic missile. Most of the SS-18 missiles, the most powerful weapon in the Soviet arsenal, were decommissioned under the terms of the Strategic Arms Reduction Treaty, but could be adapted for civil use. In 1997, Russia and Ukraine formed the International Space Company Kosmotras to convert the missiles into Dnepr launch vehicles.

Over 30 commercial satellites have been launched by Dnepr. Kosmotras also provides the launch services.

CryoSat-2 will fly in a highly inclined polar orbit, reaching latitudes of 88 degrees north and south, to maximise its coverage of the poles. Its main payload is an instrument called Synthetic Aperture Interferometric Radar Altimeter (SIRAL). Previous radar altimeters have been optimised for operations over the ocean and land, but SIRAL is the first sensor of its kind designed for ice.

CryoSat-2’s SIRAL is designed to meet the measurement requirements for ice-sheet elevation and sea-ice ‘freeboard’, which is the height protruding from the water.

Conventional radar altimeters send pulses at intervals long enough that the echoes are ‘uncorrelated’; many such echoes can be averaged to reduce noise. At the typical satellite orbital speed of 7 km/s, the interval between pulses is about 500 microseconds.

However, the CryoSat altimeter sends a burst of pulses at an interval of only about 50 microseconds. The returning echoes are correlated and, by treating the whole burst together, the data processor can separate the echo into strips arranged across the track by exploiting the slight frequency shifts, caused by the Doppler effect, in the forward- and aft-looking parts of the beam.

Each strip is about 250 m wide and the interval between bursts is arranged so that the satellite moves forward by 250 m each time. The strips laid down by successive bursts can therefore be superimposed on each other and averaged to reduce noise. This is known as the SAR (Synthetic Aperture Radar) mode.

Three startrackers mounted on the antenna support structure each takes five pictures per second. Each image is analysed by the startracker’s built-in computer and compared to a catalogue of star positions.

The Doppler Orbit and Radio Positioning Integration by Satellite (DORIS) radio receiver detects and measures the Doppler shift on signals broadcast from a network of more than 50 radio beacons around the world. Although the full accuracy of this system is obtained only after ground processing, DORIS provides a realtime estimate on board, good to about half a metre.

The DORIS system has been operating for more than a decade, and is used on many satellites, such as ESA’s Envisat.

The small laser retroreflector is attached to the underside of CryoSat. This little device has seven optical corner cubes, which reflect light in exactly the direction it came from. A global network of laser tracking stations fires short laser pulses at CryoSat-2 and times the interval before the pulse arrives back.

With a mission lifetime of three years – potentially extended to five – data will be distributed directly to users from the ground station in Kiruna, Sweden; distribution and mission planning managed via ESA’s Centre for Earth Observation (ESRIN) in Frascati, Italy; long-term archive at a dedicated facility at the Centre National d’Etudes Spatiales (CNES) in Toulouse, France. 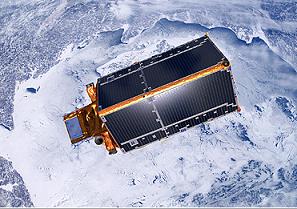 CryoSat-2 is Europe’s first mission dedicated to monitoring Earth’s ice. The advanced observation techniques will provide precise measurements on variations in the thickness of floating marine ice as well as the vast ice sheets that overlie Antarctica and Greenland. This much-awaited information will lead to a better understanding of the relationship between ice and climate change.

CryoSat-1 was lost when its Rockot launch vehicle failed to achieve orbit for the bird, after launching from the Russian Plesetsk Cosmodrome. It fell back to Earth and was lost in the Arctic Ocean.

“Many people think that CryoSat-2 is ‘just a rebuild’ and so it’s dead easy. Things are never so straightforward,” noted Richard Francis, responsible for managing ESA’s CryoSat Project. “There were quite some technical changes, of course, but many of the problems when building a satellite come from unexpected things that go wrong – and, like any project, we’ve had our share of those.

“The problem with CryoSat-2 has always been the small team, both in ESA and in industry. It meant, in practice, that everybody has had to work very hard. But, as I just mentioned, the small team we have are the best and we all benefit from an excellent team spirit.

“Whenever problems have arisen our approach with industry has been that we will solve it together. This sort of thing makes a big difference. CryoSat-2 is known in industry as a good project to work in, and I’m proud of that.”