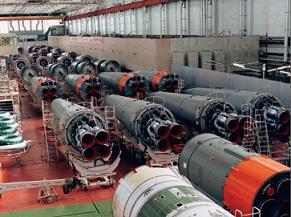 NASA astronaut Tracy Caldwell Dyson and Russian cosmonauts Alexander Skvortsov and Mikhail Kornienko have launched on their Soyuz TMA-18 vehicle at 10:04 am local time from the Baikonur Cosmodrome in Kazakhstan. The trio will arrive at the International Space Station (ISS) a day before STS-131 launches, with Discovery providing a vast amount of supplies, and also her unique – and much-needed – downmass ability.

The launch vehicle lofting the Soyuz TMA-18 into orbit is the Soyuz-FG. The vehicle was introduced in 1966, deriving from the Vostok launcher, which in turn was based on the 8K74 or R-7 intercontinental ballistic missile. It has become the world’s most used space launcher, flying over 850 times.

The four boosters on the first stage are arranged around the central core and are tapered cylinders with the oxidizer tank in the tapered portion and the kerosene tank in the cylindrical portion. As in the entire Soyuz lower composite, the RD-107A engines of the boosters are powered by nontoxic liquid oxygen – kerosene propellants.

The launch comes shortly after Expedition 22 came to a close with the safe landing of Jeff Williams and Maxim Suraev on March 18. The pair were aboard the ISS for five and half months including addition of the “Tranquility” Node 3 and the Cupola.

The station now is tended by Expedition 23 Commander Oleg Kotov and Flight Engineers Soichi Noguchi and T.J. Creamer (indirect crew handover). The three-member crew will expand back to six with the arrival of Soyuz TMA-18.

Onboard the station, Kotov, Noguchi, and Creamer are busy at work preparing for STS-131, Discovery, scheduled to dock April 7. The trio have work working on the Carbon Dioxide Removal Assembly (CDRA) during this week.

“The Water Processing Assembly (WPA) is currently down – a rack rotation is in the plan to continue to investigate potential leaks specifically within the catalytic reactor ORU (Orbital Replacement Unit).” 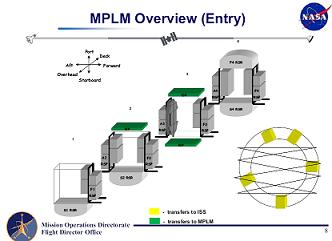 The importance of Discovery’s downmass capability will also come into play, due to the over-stow situation onboard the ISS.

“ISS is in an over-stow configuration again, and are trying to get as much off the flight as they can. They have come in late with an additional 400 lbs. of mass that they want to bring back on,” noted Flight Operations & Integration on the latest Shuttle Standup/Integration report (L2).

“That is above the heavy weight VLA (Verification Loads Assessment) case. That is being assessed. A schedule shows a complete FD8, which FO&I will try to push on to make it work to support the transfer ops. Most of the loads analysis work will be done by CMC. If it does not work out, we will stow as we are supposed to stow, but we will try to make it work.”

Other notes of interest for the ISS came via the expansive Space Station Program Control Board (SSPCB) notes (L2), which included items such as the removal of Emergency Lighting Power Supplies (ELPS) and implementation of ISS Photo-luminescent Emergency Egress Guidance System (EEGS).

“This CR (Change Request) changes the requirements document to state emergency lighting on ISS can be provided by illumination vs. lighting – making the application of glow-in-the-dark stickers applicable for finding hatchways in a dark ISS,” outlined the 8th Floor News.

“EELS requirement was to mark exits in darkness, not have anything to do for fire/smoke viewing. There is no requirement for illumination or amount of visibility from smoke. A part of the discussion was over the cost of sustaining a lighting system on ISS vs. stickers.

“ISS decided to fly and install the EEGS stickers. The failure mode on ISS is for lights out only, not smoke/visual obscuration. Fire has nothing to do with loss of lights. Crew should take a flashlight in when they do fire response and get to the point where we turn off lights.”

Additional payload requests for downstream shuttle flights were also noted, such as a request for New Spare Orbital Replacement Unit (ORU) deliveries on what is currently the final mission on the shuttle manifest, STS-133.

“PVCU MDMs attach to a bracket (bracket is the structural attachment). Driving screw on bracket mates blind connectors on the back of the MDM. There are both lower brackets and upper brackets for both configurations of the PVCU MDMs. This CR is only for a lower bracket (have upper from previous CR) and second PVCU MDM. Approved to build and fly for ULF5.”