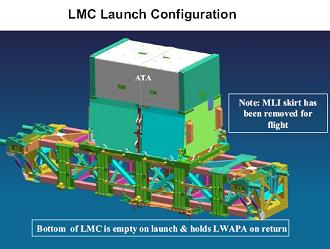 Following a series of highly elaborative and successful Flight Readiness Reviews (FRRs), launch of the Space Shuttle Discovery on the STS-131 mission is just three days away – as Launch Countdown (S0007) operations kicked off early on Friday morning. With the pad flow proceeding to plan, managers are finalizing their preparations for the L-2 Mission Management Team (MMT) meeting on Saturday.

No issues are in work, as Discovery moved into the intricate ballet of S0007 operations. Ahead of the three day countdown, the orbiter’s Payload Bay Doors (PLBDs) were closed for flight, along with the completion of pressurization tasks for Discovery’s systems.

The L-2 MMT will be held at 10am on Saturday, a final major overview of the orbiter’s status, ahead of Sunday’s tanking and weather briefing – which is scheduled for 8:15pm Eastern. Initial forecasts show no weather concerns are being predicted for Monday’s launch, either locally or at the TAL (TransAtlantic Abort Landing Sites).

The bulk of information contained within the FO&I (Flight Operations & Integration) presentation focused on one item of interest for STS-131, general reminders from the STS-128 flight last August/September, and two IFAs (In-Flight Anomalies) from STS-130.

The presentation notes that the 1-jet variable ALT PRCS control mode was assessed with a five-second delay that “reduces fatigue on ISS and increases likelihood of acceptable loads on ISS for remaining flights.”

Following that Item of Interest in the FO&I presentation is a list of three reminders from Discovery’s previous flight – the STS-128 mission last year.

The first reminder pertains to the removal of aft bulkhead hardware: aft winch, WVS antenna, and handrails. Removal of this hardware for STS-128 was necessary to provide adequate clearances for the LMC with ATA (Ammonia Tank Assembly).

Those components were not reinstalled onto Discovery after STS-128 since the LMC/ATA combo are again flying on STS-131 and require the same clearance margins. Moreover, the second reminder from STS-128 relates to ATA contingency venting procedures.

Furthermore, there are time periods where flammable conditions are predicted to occur, though this is acceptable because of numerous controls in the ATA venting process.

The third and final reminder from STS-128 pertains to a MPLM Sneak Circuit. 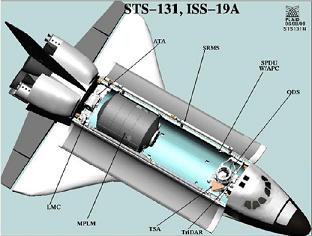 In addition to the above items, FO&I has also thoroughly reviewed all outstanding IFAs, with two IFAs from STS-130 gaining note in the department’s presentation to the SSP FRR – both of which are not a constraint to STS-131.

Currently, there is “adequate OIU functionality” to prevent this issue from being a concern for the STS-131/19A flight as a total of four channels are available for use during STS-131 – a number that could be lowered to three should the problem present itself during Discovery’s mission.

The second and last IFA to gain mention from FO&I relates to the MAUI Department of Defense (DoD) payload of opportunity.

“FO&I is coordinating with DoD regarding the payload IFA associated with MAUI on STS-130 (20A),” notes the FO&I presentation.

The presentation further notes that DoD is “responsible for resolving the anomaly prior to requesting additional MAUI burns on subsequent Shuttle flights.”

In the extremely unlikely case that orbiter Discovery were to become disabled during STS-131, orbiter Atlantis and the STS-132 stack would be tasked with carrying out the Launch On Need (LON) rescue flight for Discovery’s seven astronauts. 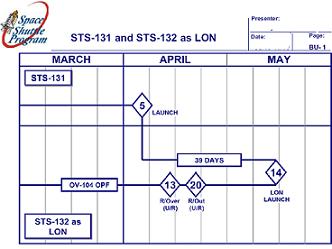 Should LON be required, orbiter Atlantis, ET-136, and RSRM set 111 would be prepared for launch in the full-up STS-132 configuration, with MRM-1 (Mini-Russian Research Module 1) and ICC-VLD (Integrated Cargo Carrier – Vertical Lightweight Deployable) payloads installed into her payload bay.

Should the LON mission become a requirement, a LON launch on May 14 would translate to a 40-day rescue period – well within the International Space Station’s CSCS (Contingency Shuttle Crew Support) timeframe of 102-days.

“With standard assumptions, duration for all consumables is greater than Shuttle LON capability” of 40 days, notes the FO&I presentation to the SSP FRR, available for download on L2.

In all, the CSCS timeframe for STS-131’s crew is constrained by the food stuffs currently aboard the ISS. “ISS CSCS consumables support 102 days food,” notes the FO&I presentation.

Aside from food, the ISS is able to the support the STS-131/Discovery crew for 328 days based on Oxygen supplies, 247 days based on water reserves, 216 days based on waste containment, and an indefinite timeframe in terms of CO2 removal capability.

For this LON scenario, none of Discovery’s astronauts would return to Earth on a Soyuz craft and all crew members would maintain a nominal exercise routine.

Discovery herself would remain docked to the ISS for 24-days before being remotely undocked from the ISS and either destructively reentered over of the Pacific Ocean or remotely guided through reentry with the hope of landing her at Edwards Air Force Base, California.

From an engineering standpoint, no significant issues with Discovery, the SSV (Space Shuttle Vehicle) stack, or the payload are being worked at this time. There are currently no non-conformances, no crew squawks, no Launch Commit Criteria concerns or changes, and no Support Requirement issues.

In terms of technical requirements, there are currently no open waivers or exceptions for final vehicle launch processing and all open requirements are scheduled for completion (or have already been completed). 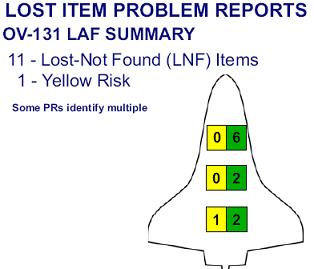 All Orbiter “lost & found Problem Reports” have been evaluated by the Mission Engineering Review Board and have been “dispositioned as no constraint and are closed,” notes the Engineering Status presentation to the SSP FRR, available for download on L2.

There are no Payload “lost & found Problem Reports” for STS-131. Nonetheless, according the Risk Assessment and Mitigation division, there are three identified risk areas for “KSC programmatic and Flight 19A.”

This known condition has translated into a two-step COPV pressurization procedure to decrease the likelihood of a COPV rupture during pre-flight preparations.

The second identified risk was the turnaround time for the MPLM Leonardo from its last flight on the STS-128 mission in August/September 2009. This risk and all associated work have been closed and are no longer issues or concerns.

The third and final risk pertains to the retention of the skilled contractor workforce at KSC. “Risk # 6136: Contractor Workforce Through 2010. Critical skills are required to successfully complete processing ISS flights through 2010.”

As with the COPV risk, this contractor workforce risk has been known and understood for many months and steps/procedures are in place to curtail this risk.