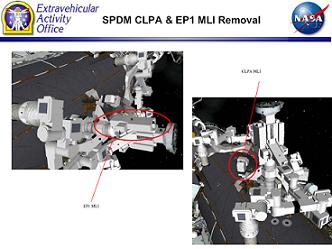 On the 29th anniversary of the first Space Shuttle mission (April 12), Discovery continues to perform well, as her crew completed the third and final EVA of the mission – including replacement tasks associated with the ATA (Ammonia Tank Assembly). Meanwhile, the Damage Assessment Team (DAT) have presented their final overview of the orbiter’s Thermal Protection System (TPS), ahead of Late Inspections.

Flight Day 9 (FD-9) marked the third spacewalk of the STS-131/19A mission. The EVA wrapped up Removal and Replacement (R&R) operations of the ATA on the S1 truss of the ISS as well as the performance of several Cat-2 and Cat-3 EVA objectives.

Following issues with a troublesome bolt used to anchor the new ATA to its berthing location on the S1 truss, EVA crewmembers Rick Mastracchio (EV-1) and Clay Anderson (EV-2) picked up two tasks that were deferred from EVA-2 because of time constraints on the previous spacewalk.

These two tasks – fluid line connections to the new ATA and the retrieval of now-unnecessary MMOD (Micro-Meteoroid Orbiting Debris) shields for the Quest Airlock – although there have been notes of a problem with a valve on the new ATA that requires evaluation.

Under standard mission timelines, Rick Mastracchio and Clay Anderson’s spacesuits (or EMUs as they are known within NASA) underwent pre-EVA purges just under two hours prior to the start of EVA-3.

EVA crews tend to work ahead of the planned timeline, as was the case with this spacewalk, which beat the scheduled start time of 3:16a.m., by 45 minutes.

Pre-mission timelines indicate that four (4) tasks scheduled for EVA-3 are classified as Cat-3 objectives, the lowest EVA Category for the STS-131 mission.

As such, the CP13 ETVCG light, SPDM (Special Purpose Dexterous Manipulator) CLPA1 installation, EP1 cover removal, S1 radiator GF beam installation, and/or WIFEX release tasks could be deferred to a stage (ISS crew) EVA or to one of the next two Space Shuttle missions in order to accomplish the fluid line connections to the new ATA and retrieval of the MMOD shield objectives.

Regardless, the primary activities (in order of performance) were the stowage of the AGB, preparation of the LMC (Lightweight Multi-purpose support structure Carrier) for old ATA berthing, installation of the old ATA onto the LMC for return to Earth in Discovery’s Payload Bay, FGB removal and stowage, setup of the SSRMS (Space Station Remote Manipulator System) for LWAPA (Light Weight Adapter Plate Assembly) retrieval, LWAPA retrieval, SSRMS cleanup, and Airlock ingress.

Due to more trouble with a bolt during ATA installation into the LMC, the LWAPA tasks were deleted from the EVA. Instead, get-ahead work was carried out on work for a space-to-ground antenna, which will arrive on STS-132.

The entire EVA lasted approximately 6.5 hours and wrapping  up around 8:38a.m. EDT – with mission controllers calling the due “EVA superheroes” for their work during the three spacewalks.

With the completion of EVA-3, the two EMUs will be de-serviced and prepared for transfer back to orbiter Discovery on FD-10. The Discovery crew will then head to bed at 3:21p.m. EDT. 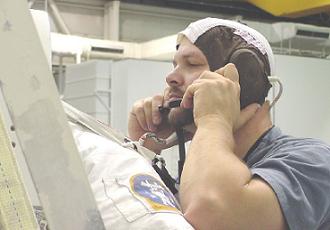 “EVA-1 Intermittent Loss of Left Ear Audio: At the very end of EVA1, EV1 (CM Mastracchio) experienced intermittent audio drop out in left ear when he turned his head,” notes a status update from the Mission Management Team (MMT).

Following the EVA, the CCA was inspected for any moisture and MBED integrity.

The presentation notes that moisture could lead to potential failure modes of the CCA because of “wiring problems in the CCEM crossover cable.”

Following additional thermal and trajectory analyses surrounding three of the four damaged areas on Discovery, the team reached the unanimous conclusion that Discovery’s TPS could be officially cleared for reentry. 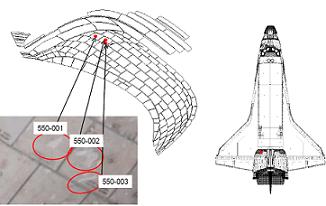 The first area of Discovery’s TPS to gain note in the final and comprehensive DAT presentation were three (3) small areas of tile damage clustered together on the vehicle’s Left Hand (LH) OMS Pod.

Further assessment of the area revealed that all safety margins are maintained in that area of the vehicle despite the cosmetic damage to the OMS pod tiles.

The second region of discussion in the DAT presentation was the Rudder Speed Brake (RSB) trailing edge tile liberation. 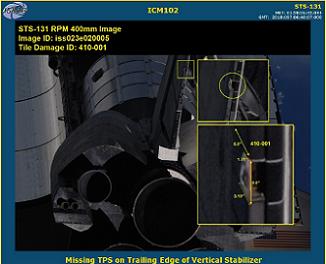 As expected, this area has been cleared of any concern due in large part to the fact that this area of the vehicle experiences higher temperatures during ascent than it does during reentry.

No temperature or structural exceedances were identified underneath the undamaged TPS areas in the region.

Further aiding the positive results for the RSB’s trailing edge is the fact that the RSB remains in the closed position from the De-orbit Burn (at Mach 25) until the Mach 10 region, creating a “low heating” environment during the plasma stage of reentry. 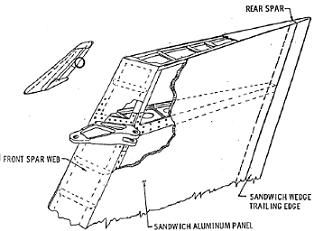 Additionally, the RSB trailing edge is “a lightly loaded structure that is the end of the cantilever aero surface and is not part of the load path of the RSB main torque box – i.e., it is structurally isolated.”

Therefore, the RSB trailing edge does not take the brunt of the RSB structural loads, only local aero loads.

“Disbond of closeout does not reduce trailing edge panel capability and propagation of disbonding (during reentry) is not credible,” notes the DAT presentation.

Furthermore, the surrounding TPS as well as the intact portion of the partially liberated TPS tile will remain intact during reentry.

The presentation also notes that “Entry RTV bondline temperatures are below certification.” Thus, the partially liberated RSB tile is not a concern for reentry. 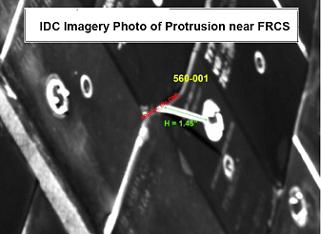 Lastly, the final area of Discovery’s TPS to gain mention in the comprehensive DAT report is a protruding AMES gap filler (G/F) on the left hand side of the orbiter’s FRCS (Forward Reaction Control System) – specifically, its potential liberation properties during reentry.

While Discovery’s reentry attitude precludes the possibility of the G/F impacting windows #1 and #2 (the two windows to the Commander’s left) should the G/F liberate while Discovery is travelling below Mach 2.5, the G/F does hold the potential to impact the windows during a liberation event between Mach 6 and 2.5. 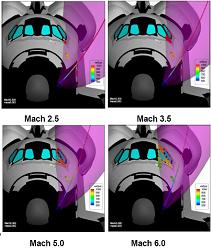 “Based on previous window impact tests, it is possible the G/F could create damage to the pane exceeding maximum flaw depth allowable for descent.”

While the likelihood of a G/F impact creating a “through hole” is classed as “unlikely,” a shallow angle (~10 deg) low mass (0.0008 lbm) impact at a velocity of ~1,050 ft/sec at or above Mach 4 could cause damage to the outer thermal pane that could propagate during Mach 4 flight burst loads.

“In the event damage occurs at any of the Mach #’s and flaw propagation occurs, it would manifest itself in the form of cracks radiating from the impact site, when subjected to burst loads,” notes the presentation.

In the event that this was to happen, the thermal pane is expected to remain intact and retained in place with a fairly nominal view across the window.

Therefore, the event would be “non-catastrophic” and is thus deemed an “acceptable risk for entry.”