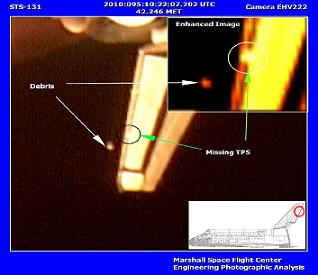 Atlantis has rolled over to the Vehicle Assembly Building (VAB) – taking in several photo opportunities en route – in preparation for what is currently a May 14th launch for STS-132’s mission to the ISS. Atlantis was cleared for rollover late last week, following a review of the handful of minor issues noted with Discovery’s ongoing STS-131 mission.

Atlantis’ mission will be the 132nd flight of the Shuttle Program and the 34th shuttle flight dedicated to construction and outfitting of the International Space Station, as she carries up a largely Russian payload. She will head into STS-335 (LON – Launch On Need support for STS-133) processing – potentially becoming STS-135 – upon her return.

Potentially large slips to downstream missions – especially STS-134 – had threatened a decision to leave Atlantis in the home comforts of her Orbiter Processing Facility (OPF-1), with ongoing reviews what could be a several month delay to STS-134’s AMS payload, which continues to undergo testing in Holland.

Bill Gerstenmaier, NASA Associate Administrator for Space Operations, is heading to the European Space Research and Technology Centre at the end of this week to review the latest set of test results on the AMS payload.

The path to rollover for Atlantis was smooth, with only 22 Interim Problem Reports (IPRs) noted during her flow since returning from the STS-129 mission.

“OV-104 (STS-132) Completed window torque checks. Got the weight and C.G. (Center of Gravity) completed, orbiter on the transporter in preps for rollover,” noted KSC integration (via L2) ahead of rollover. “In the VAB, on the ET/SRB stack, are on schedule for rollover for April 13. At Pad A, turnaround activities are continuing from the STS-131 launch. The MLP is back from Pad A to the VAB.

“Last week, Windows #2 and #5 carrier panels were reinstalled after completing the window torque checks. In the flame trench, did find an area that needed some repair. It has been bounded, and the repair is in work and will be completed by next week.

“Orbiter: OV-104 (OPF Bay 1): IPR-22: Left out board main landing gear tire pressure measurement low. Analysis revealed there was no discrepancy, this IPR will be closed. Landing gear was retracted on Friday. Rollover to the VAB is scheduled for tomorrow with first motion scheduled for 0700.”

Rollover also required the approval of the Orbiter Roll Mate Review (ORMR) meeting late last week, which had the added task of reviewing the status of STS-131, in case of any corrective actions that may have been required on Atlantis. Normally such actions would be based on a post-flight IFA (In Flight Anomaly Review), but this won’t be conducted until April 22 for STS-131.

With Discovery’s ET-135 showing the mitigation procedures on the intertank foam liberation issue has worked, and no issues for re-entry with the missing TPS from her RSB, Atlantis was cleared to rollover on schedule.

“It was decided that the Rudder Speed-Brake (RSB) tile evaluation based on the STS-131 RSB tile anomaly will not be required,” confirmed managers.

Packed onto the MRM-1 will be several module-specific items as well as spare parts and a portable work platform.

“The STS-132 Payload Readiness Review was held last Thursday. The payload is clean and ready for turnover for installation in orbiter,” noted Flight Operations & Integration on the Standup report. “Managers completed the STS-132 L-30 day Bench Review, which went well. There are some upcoming Station manifest changes. Expect that the L-10 day Bench Review will have quite a bit of hardware to review.” 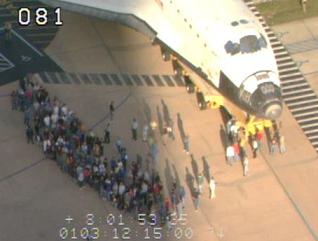 Rollover normally takes less than an hour to complete. However, given this is potentially Atlantis’ final rollover for a mission, several stops allowed for photo opportunities with her engineers and technicians, resulting in the orbiter finally arriving in the VAB three hours after leaving OPF-1.

Over in the VAB, Atlantis’ ET-136 External Tank and twin Solid Rocket Boosters (SRBs) await mating, which will be completed during the week. Final closeouts and platform retractions were in work ahead of Atlantis’ arrival, with mating set to take place in High Bay 1.

With several STS-132 Flight Readiness Reviews (FRRs) already completed – including the MOD FRR (14 presentations available on L2) – the next major review will be the Space Shuttle Program (SSP) FRR, which will be conducted over two days – April 28-29. The STS-132 Agency FRR – which sets the launch date – is scheduled for May 5.