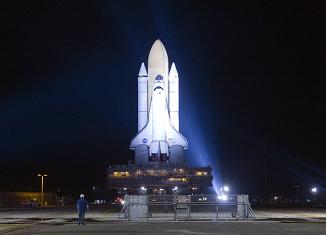 Atlantis’ STS-132 launch remains on target for May 14, although managers have noted they will slip to a later date if more time is needed – with just one day of contingency in the flow. Those shuttle managers began their Space Shuttle Program (SSP) Flight Readiness Review (FRR) on Wednesday, which included aligning STS-133 as Atlantis’ LON (Launch On Need) support.

Engineers are coming to the end of Pad Validation operations (S0009), which will be completed by the mating of the Orbiter Mid Body Umbilical Unit (OMBUU).

The pad flow has been proceeding to plan, following delays relating to unacceptable weather for rollout last week, which reduced the amount of contingency to just one day – based on a May 14 launch date. As always, the launch date is only a processing target until its approval at the Agency FRR, set to take place at the end of next week.

“Great job by the KSC team on the move to Pad A. The team did a nice job; they did not get in a rush to get out to the Pad. They watched the weather and followed all the rules. They are really taking care of the hardware, and it cannot be stressed how important that is,” noted SSP manager John Shannon on the Shuttle Standup/Integration report (L2).

“Rolled out of the OPF (Orbiter Processing Facility) with three days of contingency, and on paper now have one. We will take whatever amount of time is required to do the job right. May 14 is just a date that we are going to try to hit.”

With the STS-132 payload installed into the vehicle, the next major milestone is the process of loading of hypergolics into the vehicle’s OMS (Orbital Maneuvering System) and RCS (Reaction Control System) – a process that is scheduled to be completed on Friday.

A number of issues have been noted with the QDs and other related Ground Support Equipment (GSE) on the Aft Propulsion System (APS). Such issues are not unusual for this stage of the pad flow.

“RH (Right Hand) Oxidizer QD flight half poppet replacement is scheduled for Wednesday third shift (Thursday morning). During preps, the ground half of RH QD was found to be leaking,” added the NTD report.

“A GSE IPR (Interim Problem Report) was taken and LH (Left Hand) QD ground half was ‘borrowed’ to use as RH QD ground half in support of the poppet replacement.”

This issue was only the 30th IPR to be added to the STS-132 flow, again an extremely low number. However, the latest NTD status noted the issue was still undergoing troubleshooting.

“New IPR 0030 to OMS/RCS: LH Aft Propulsion System (APS) fuel QDs (two) or associated Ground Support Equipment (GSE) valves indicate leakage. Troubleshooting could not immediately determine the leakage source or if the leakage is internal or external. Troubleshooting terminated to allow for the poppet R&R after which troubleshooting will continue.”

It is currently unknown if troubleshooting will delay the completion of hypergolic loading, or if it has the potential to eat into the one remaining contingency day in the flow. 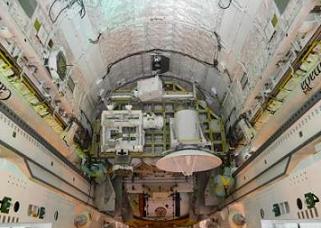 For Integrated Payload Operations (S0600), Atlantis’ Payload Bay Doors (PLBDs) were in the process of being closed on Wednesday night – ahead of hyperloading activities – following the clearance of a small issue with the Russian MRM-1 payload – which engineers noticed some of its paintwork was peeling.

“Peeling paint found on the MRM1 payload. Constraint is completion of payload closeouts,” listed IPR 0027, which is not a problem for the operation of MRM-1, but holds a potential threat of releasing debris on orbit.

“Expressed appreciation for all who helped pull the story together for the debris contamination found coming off MRM-1. Payload Processing will bring the story forward to the SSP FRR.

Engineers also noted MRM-1 cycled its Fire and Smoke detector self test several times, potentially matching events with its cousin on Station last year, when the crews of STS-129 and the ISS were woken on consecutive nights by a false depressurization and fire alarms, caused by false indications originating on the Russian Poisk module (MRM-2).

“MRM1 Fire and Smoke Detector self test unexpectedly recycled several times. The system was recovered by rebooting. Engineering is evaluating. This is not considered to be a flight constraint.”

Other work taking place at the pad includes closeouts for flight and the arrival of waves of LOX (Liquid Oxygen) tankers, replenishing the spheres that will provide propellant for loading on to Atlantis’ External Tank. 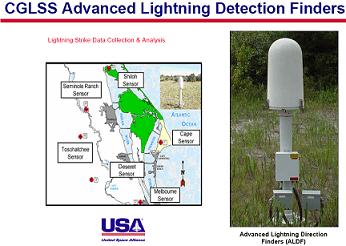 Engineers are also checking into a lightning event at the pad, which was discussed at an Engineering Review Board (ERB), allowing for checks to be carried out on critical pad and vehicle systems.

“An ERB was held to review data regarding the possible lightning event at Pad A on Sunday night. S0018 Op 11 Preliminary Lightning Analysis and Op 12 GSE and Facility Verifications Post Lightning Strike were kicked off as a result of the discussion,” added the NTD report. “Pad walk downs and KCCS inspections are in work.”

Over in Houston, SSP managers have been meeting to review their Flight Readiness Review (FRR) documentation, the final major review of the mission ahead of the Agency FRR on May 5. (All 29 SSP FRR presentations are available on L2 – several articles will follow).

A late note of interest for the FRR was the change to the LON rescue support for STS-132, following the swap in the flight order of STS-133 and STS-134 due to the problems with Endeavour’s AMS payload. Managers confirmed the ET and Solid Rocket Booster stack will remain the same as previously planned for STS-134, transfering to a role with STS-133.

“Have SSP FRR on Wednesday and Thursday, April 28 and 29,” noted KSC Integration. “Affecting mainly Orbiter and SSME (Space Shuttle Main Engines), everyone … should also include information on STS-133 stack readiness to support LON. Would fly the same ET/SRB stack.”

This stage of the STS-132 flow is one of the busiest periods, with reviews into the IFAs (In Flight Anomalies) for the previous mission (STS-131) presented on Monday (15 presentations available in L2), which make up part of the ongoing SSP FRR.

With managers and engineers working hard to make the May 14 launch date, Mission Management Team (MMT) co-chair LeRoy Cain stressed that if more time is needed (slipping the launch date), that option will be taken.

“We are on track for STS-132; still targeting May 14. The vehicle at the Pad and other things seem to be going well in terms of getting ready to fly that mission on the heels of STS-131,” noted Mr Cain. “If we need to take more time we will do that, but by all accounts it appears we are on track to make May 14, if everything continues to cooperate.”