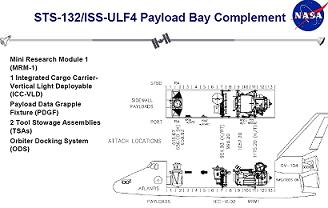 Preparations are in full swing for next month’s scheduled launch of Space Shuttle Atlantis on the STS-132/ULF-4 mission to deliver the Russian MRM-1 (Mini-Russian Research Module -1) payload – and six external payloads/batteries via the ICC-VLD (Integrated Cargo Carrier – Vertical Light Deployable) – to the International Space Station (ISS), as the mission heads into the Flight Readiness Review (FRR) stage.

With about one contingency day remaining in Atlantis’ processing flow toward her scheduled May 14 launch date, the STS-132/Atlantis stack was successfully rolled out to Launch Pad 39A on Thursday morning following the cancellation of four previous rollout attempts due to adverse weather and unacceptable crawler way conditions.

Coming up this week, Atlantis’ MRM-1 and ICC-VLD payloads will be installed into her Payload Bay and preparations will continue for the hypergolic propellant loading of Atlantis’ RCS (Reaction Control System), OMS (Orbital Maneuvering System) Pods, and SRBs (Solid Rocket Boosters).

In all, STS-132 will be Atlantis’ 32nd and final mission (barring the need for the STS-335 Launch On Need rescue flight for the final Space Shuttle mission) in support of the Space Shuttle Program – capping an amazing 25-year operational history.

Atlantis’ service included classified Department of Defense flights, satellite deployment missions, lengthy science missions, seven of the nine Space Shuttle missions to the Russian MIR space station, 10 flights to the ISS (not including STS-132), and the flagship flight of the final Shuttle missions – the STS-125/SM-4 servicing mission to the veteran and iconic Hubble Space Telescope last May.

In addition to EVA work, 30-hours of middeck transfers from and to Atlantis will be required to transfer all necessary middeck payloads to/from the ISS.

During final launch preparations, Atlantis’ 5 Nitrogen tanks will be completely filled (with no ground offload). Additionally, Atlantis’ 5 Cryo tank sets will be filled completely (with no offload) – giving ground personnel ~102 hours of pad hold time during launch operations, with LH2 being the limiting consumable.

With all pre-launch/pad work and FRRs complete, Atlantis, the STS-132 flight hardware, and launch/mission personnel are expected to be ready for an opening launch attempt of STS-132/ULF-4 mission on Friday, May 14.

However, the exact day that Atlantis will actually make her opening launch attempt is currently clouded by the ongoing manifest meetings surrounding the expected lengthy delay to the STS-134/ULF-6 flight – the Launch On Need (LON) rescue mission for STS-132 crew – because of problems with that mission’s primary payload: AMS-02 (Alpha Magnetic Spectrometer -02).

A recent decision to replace the primary cryo magnetic on AMS-02 with a more traditional permanent magnet (which will allow for a longer operational life of AMS-02 once on orbit) has produced a request to delay the STS-134/ULF-6 mission until November at the earliest.

While official word is expected early this coming week regarding the decision of where STS-134 will be moving to, it is possible that the LON rescue flight for STS-132 will need to move to the STS-133/ULF-5 flight in mid-September. 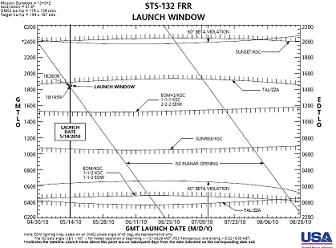 Further complicating matters, is the unique nature of Atlantis’ STS-132 launch windows in May, June, and July.

Since DDO (Dual Docked Operations) have been ruled out for the Soyuz 21S undocking on June 2, Atlantis will be prohibited from launching between May 24 and May 31 to ensure that she will not be docked to the ISS at the time of the Soyuz 21S departure.

Therefore, if Atlantis is not off the ground by May 23, launch of STS-132 will be delayed until June 1 at the earliest.

However, the back end of Atlantis’ June launch window is also complicated by two factors: DDO with a docking Soyuz 23S spacecraft and a solar Beta Angle Cut Out (BACO).

The BACO is – for all intents and purposes – non-negotiable and will prevent Atlantis from launch after June 12 until June 29 – and would result in a launch delay to August since all the Russian docking ports on the ISS (which are needed to berth Atlantis’ MRM-1 payload to) will be occupied with visiting Russian Soyuz and Progress vehicles in July.

However, there is a possibility that June 7 could be the final day in June that Atlantis would be allowed to launch. 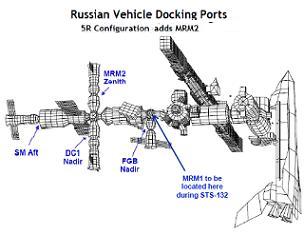 While propellant is budgeted on Atlantis to support a possible DDO scenario with the docking Soyuz 23S spacecraft on June 18, recent memos suggest that the engineering, SSP (Space Shuttle Program), and ISSP (ISS Program) may not yet be comfortable with DDO operations.

“FO&I (Flight Operations & Integration) has been redirected to put a CR (Change request) in the system to take Dual Docked Ops out of the STS-132 pallet,” notes a Space Shuttle Program Standup/Integration Report from mid-April.

If this indeed is approved, and DDO is removed as a possibility for STS-132, the final day Atlantis could launch before August, would be June 7.

(NOTE: The precise second for in-plane launch conditions is subject to change due to orbital drag and better understanding of precise ISS position on launch day.)

When Atlantis launches on STS-132, the vehicle will be inserted into a standard 51.6-degree inclination orbit for a 190-nautical mile high rendezvous with the ISS. 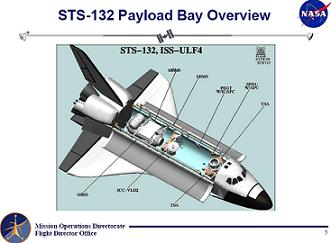 Once Atlantis reaches orbit on FD-1 (Flight Day 1), post-insertion operations will be performed, her payload bay doors will be opened, and her Ku-Band antenna deployed and activated.

MRM-1 will also be activated, as will the SRMS (Shuttle Remote Manipulator System – robot arm). External Tank Umbilical Well photos, ET hand-held video, and WLES (Wing Leading Edge Sensor) data will all be downloaded/downlinked to the ground at the end of FD-1.

The crew will also take detailed, HI-RES photos of Atlantis’ twin OMS Pods for imagery expert review on the ground.

The NC-2 and NC-3 course correction burns will also be performed on FD-2, as will activation of the Centerline docking camera and extension of the Orbiter Docking Ring.

If Atlantis launches on May 14, the middle-child orbiter of NASA’s fleet will pull up to dock with the ISS on Sunday, May 16 at ~11:23 EDT, following the standard R-bar Pitch Maneuver (RPM) 600-feet below the ISS. 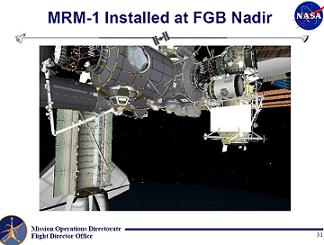 Following docking on FD-3, the ICC-VLD will be removed from Atlantis’ Payload Bay and installed on a POA (Payload ORU [Orbital Replacement Unit] Accommodation).

All RPM photos will be downlinked to the ground, the UROKO (‘fish scales’) sample experiment will be prepped, Nitrogen will be transferred to the ISS from Atlantis’ Nitrogen tanks, Steven Bowen and Garret Reisman will undergo necessary preparations for EVA-1, and the SSRMS (Space Station Remote Manipulator System) will be walked-off to the EVA-1 support position and a MT (Mobile Transporter cart) will be translated to Work Station 6 in the overnight hours.

Middeck transfers will also occur on FD-4 and the front CDRA (Carbon Dioxide Removal Assembly) bed will be installed.

Later, the SRMS will be maneuvered into its MRM-1 pre-grapple position and the SSRMS will be walked off to its FD-5 support position.

On FD-5, the SRMS will unberth the MRM-1 and hand it off to the SSRMS – which in turn will be used to install MRM-1 to FGB (Functional Cargo Block) Nadir.

Also, on FD-5, a Focused Inspection of Atlantis’ TPS (Thermal Protection System) will be carried out if required.

Inside the ISS, the RFTA will be removed and replaced, GLACIER/MELFI samples will be transferred, and EVA-2 (Good and Bowen) preparations will be undertaken.

In the overnight hours, the SSRMS will be walked off to Work Station 8.

The following day, EVA-2 will dominate FD-6. Activities during this EVA will include the removal and replacement of 4 of 6 P6 truss batteries.

To accomplish this endeavor, the SSRMS will grapple the ICC-VLD and extend it out to the P6 truss where Bowen and Good will have access to the new P6 batteries.

FD-8 will see the final of the three EVAs. EVA-3 will include the completion of the P6 battery removal and replacement and PDGF (Power Data Grapple Fixture) retrieval. 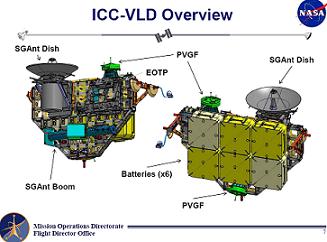 Following completion of the P6 battery efforts, the SSRMS will return the ICC-VLD to a POA.

FD-9 will involve the transfer of Oxygen and Nitrogen from Atlantis to the ISS, middeck payload transfers, the berthing of the ICC-VLD into Atlantis’ Payload Bay for return to Earth, MYCO sample collection, SPINAL data collection, and a potential reboost of the ISS by Atlantis.

Given a May 14 launch, and nominal mission timeline, Atlantis will end her 11th and final stay at the ISS with an undocking on Sunday, May 23 at ~12:30 EDT and subsequent Flyaround of the orbital science laboratory.

FD-11will be spent conducting late-inspections of Atlantis’ RCC WLE and nose cap panels, powering down the SRMS, calibrating the HUD (Heads Up Display) for landing if cryo consumables allow, and conducting an orbit adjust burn to set-up the mission’s numerous End Of Mission landing attempts.

FD-12 will see Atlantis’ crew configuring their spaceship for reentry and landing operations. Checkout of the Flight Control System and Hot Fire of the RCS will all be performed, as will Landing-1day Comm checks.

Performing an ascending node reentry, Atlantis would arrive back at her home at the Kennedy Space Center at ~10:05 EDT – ~11-days 19-hours 46-minutes after launch.

As with all Space Shuttle missions, the potential exists that a technical or medial issue could force the implementation of a Minimum Duration Flight (MDF) for Atlantis/STS-132.

Unlike the STS-131 mission this month, which was so complex that a MDF was only one day shorter than the nominal mission, a MDF for STS-132 would involve the elimination of all three EVAs and six (6) Flight Days, as well as the termination of the mission on FD-7.

For the Space Shuttle Program, a MDF is defined as the termination of a Shuttle mission after the completion of all CAT-I mission objectives. 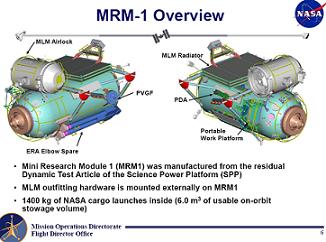 For STS-132, the CAT-I objectives are: activation and checkout of MRM-1 in Atlantis’ Payload Bay (FD-1), rendezvous and docking to ISS (FD-3), installation of MRM-1 to the FGB Nadir port with closure of a minimum of one set of hooks in the MRM-1/FGB nadir interface and confirmation of electrical connectivity through the MRM-1/FGB Interface.

To accomplish these tasks, FDs 1 and 2 of STS-132 would be performed per the nominal mission timeline. FD-3 would see Atlantis perform the RPM and dock with the ISS. Following docking, the ICC-VLD would be unberthed and installed to a POA.

MRM-1 would be installed to FGB Nadir on FD-4, and all critical supplies would be transferred to/from ISS on this day.

FD-5 would see the performance of a Focused Inspection (if required) and hatch closure between Atlantis and the ISS.

Atlantis would then return to land at the first available Primary U.S. Landing Site on FD-7.

Furthermore, unlike previous missions to date, there is “No preflight capability to extend mission past 12+0 day mission with non-SSPTS vehicle (OV-104),” notes the MOD Flight Directors office FRR presentation, available for download on L2.