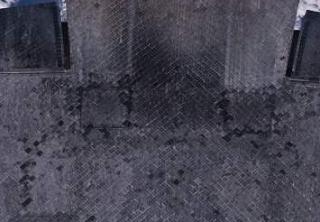 Following a stunning R-bar Pitch Maneuver (RPM) and docking to the ISS Sunday morning, Atlantis’ crew have completed the first of three complex EVAs (spacewalks) of the STS-132 mission. The EVA completed the installation of a new SGANT (Space to Ground ANTenna), installation of an EOTP (Enhanced ORU Temporary Platform), and preparations for the P6 battery R&R (Removal and Replacement) during EVAs 2 and 3.

Atlantis continues to perform flawlessly in orbit as the STS-132 mission heads into its marathon run of docked days to the International Space Station (ISS).

With only a few issues – none of which hold a mission impact – on Atlantis, her milestone achievements continue to add up during her final voyage.

With her final launch on Friday afternoon, Atlantis became the only Shuttle orbiter to NOT suffer a post-Main Engine start Pad Abort (referred to as a post-SSME (Space Shuttle Main Engine) RSLS (Redundant Set Launch Sequencer) abort) in the history of the Shuttle program. Columbia (STS-55), Challenger (STS-51-F), and Endeavour (STS-68) each had one post-SSME RSLS abort; Discovery had two (STS-41-D and STS-51).

With 18 total space station dockings, Atlantis is the world record holder for most dockings of a single vehicle to a space station – a record she will hold for the foreseeable future as no currently-planned vehicle is scheduled to be used 18 times.

Nonetheless, as Atlantis’ milestones continue, her final Flight Crew is preparing to perform the first of the STS-132 mission’s three planned EVAs.

In all, Atlantis is carrying enough EVA consumables to support the 3+1+2 spacewalks of the mission – the three planned EVAs plus one contingency EVA from the ISS to complete the CAT I EVA objectives if needed plus two contingency EVAs from Atlantis herself.

The two contingency EVAs from Atlantis (one of which is known to not be required) would have been staged in the event that Atlantis’ ET umbilical well doors failed to close after ET/Orbiter separation.

Closure of Atlantis’ ET umbilical well doors has been confirmed by the orbiter’s onboard computers and by RPM photography taken by the ISS crew during Atlantis’ back-flip Sunday morning (huge raw collection of hi res photos on L2).

Atlantis has already been cleared from the need for a Focused Inspection (FI), based on the Damage Assessment Team (DAT) evaluations of the orbiter Thermal Protection System (TPS).

The second contingency Shuttle-based EVA would be used at the end of Atlantis’ mission should a manual closing of her Payload Bay Doors be required due to some unforeseen mechanical problem with the doors.

For the STS-132 mission’s first EVA, Garrett “Big ‘G'” Reisman and Steven “Steve-O” Bowen stepped outside the ISS/Atlantis stack for approximately six and one half hours to undertake the EVA’s three primary tasks.

Around 0414 EDT, the Quest Airlock was once again depressurized to 10.2 psi to further aid EVA conditioning for Reisman and Bowen.

Spacesuit purge began around 0618 EDT, with Reisman and Bowen beginning EVA-1 at 0754 EDT – around 30 minutes ahead of the schedule. 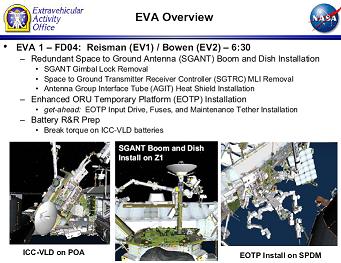 Reisman and Bowen began their first task – Pallet preparations – shortly after egress. Reisman spent around 45-minutes preparing the pallet while Bowen worked on the task for an hour and 45-minutes.

The two worked on the SGANT boom installation until ~2hrs 30minutes into the EVA.

Following the SGANT dish tasks, Reisman movd on and begin installation of the EOTP, joined by Bowen.

Reisman spent ~30-minutes cleaning up the SSRMS (Space Station Remote Manipulator System – or robot arm) while Bowen conducted preparations on the P6 batteries on the ICC-VLD (Integrated Cargo Carrier – Vertical Lightweight Deployed) ahead of the P6 battery R&R on EVAs 2 &3.

With those tasks complete, Reisman and Bowne finished up standard cleanup activities and ingressed the Quest Airlock, ending a longer than expected spacewalk at 7 hours and 25 minutes, partly due to a primary computer failure – which included the video monitors that were required for robotic operations – which took around 10 minutes to reconfigure to the secondary system.

Atlantis’ delivery of a new SGANT assembly to the International Space Station represents an ongoing effort to stockpile the ISS with as many spare parts and components as possible before the large upmass capability of the Space Shuttle is lost with the fleet’s retirement later this year. 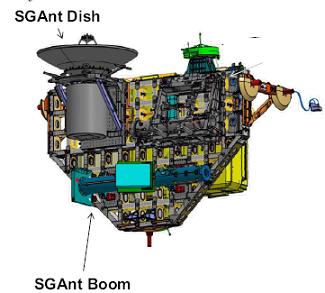 Among the numerous spares being prepositioned on the ISS, installation of the new SGANT antenna represents a critical step forward in terms of redundancy within the ISS communications system.

As described by Steven Long, a lead engineer on the SGANT system, in an interview with NASASpaceflight.com, “The current antenna we have [on ISS] is on the order of 10-years old and it’s getting close to its end of life. So NASA has decided to install a second or backup boom on the Station.”

“[The new SGANT] … will give NASA the ability to switch between either one of those antennas (the current SGANT or the new SGANT) in about a 5-hour period. If they didn’t have this [new SGANT] prepositioned like we will after EVA-1, it would take NASA a few months if not a year before a backup Ku Band antenna could be in place.

Therefore, this backup SGANT – which will be installed on the Z1 truss – will provide NASA with a critical new redundancy.

The need for redundancy within the communications systems on orbit was demonstrated last month during Space Shuttle Discovery’s STS-131/19A mission – during which Discovery’s Ku-Band antenna failed and all high-speed imagery and data downlink/uplink capability with the vehicle was lost. 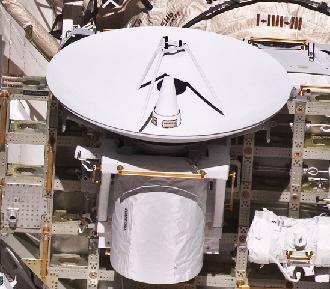 Discovery’s crew and ground controllers relied heavily on the ISS’s sole SGANT antenna to downlink the critical imagery and inspection data of Discovery’s TPS (Thermal Protection System) to the ground.

This cross-capability is something that both the ISS and Shuttle Programs are extremely proud of. “I worked alongside our Shuttle partners during the STS-131 Ku Band problem,” notes Long. “Those [Shuttle] guys were very grateful that we were able to take their data and get it back to the ground. It really demonstrates the cross-capability and redundancy of the systems on orbit.”

However, delivery of a backup SGANT was not planned in the original assembly sequence of the ISS. 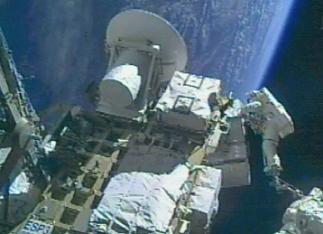 The first of these spare antennas was launched to the ISS in July 2009 on Space Shuttle Endeavour’s STS-127/2J/A flight and stored in a dormant state on ESP-3 on the Integrated Truss Structure.

The second spare antenna – the one launched on Atlantis/STS-132 – was originally a Qualification unit that was never meant to fly.

As Steve Long relates, “We had to return [the Qualification unit] to the vendor and have it refurbed and certified so it would be ready for flight. And while that was going on, Boeing went off and built a new boom to get [the antenna] over the Z1 truss.”

However, an obstacle to the installation of a second SGANT was the location in which it would be attached.

“The other thing we had to do when we went into the design phase was to identify how we were going to mount [the new SGANT] to the Z1 truss since it was not originally planned to have two SGANTs up there on Z1 at the same time,” Long recalls.

“So we built a footprint that would fit right in that square and once we get that footprint in there [Reisman and Bowen] will fasten the new SGANT base in place and then build up the remaining part of the stack.”

After the new SGANT’s installation, a health and status check will be conducted to ensure that all external cabling is hooked up correctly and that proper communication can be had with the assembly. The necessary internal cabling is expected to be routed by late-June/early-July – at which point a full systems checkout will occur.

However, the new antenna will not be used right away. It will remain in place as a spare that can be activated and used if needed.

Then, in 2012, after the delivery of additional hardware and components to the ISS, the new SGANT will be used in conjunction with the primary SGANT to increase the uplink and downlink capability to and from the ISS.

Therefore, with a second SGANT being installed on STS-132, and a spare SGANT dish prepositioned on ESP-3, there are currently no plans to build further SGANTs for Station.

Additionally, with the retirement of the Space Shuttle fleet, there would be no way to launch another SGANT to Station as Dragon, Orbital, HTV, and ATV are incapable of launching such a component.