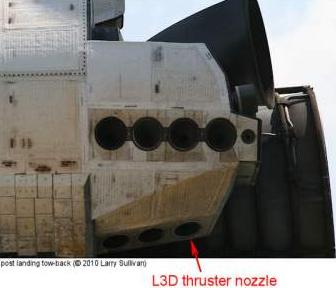 Following a spectacularly successful docked mission to the ISS, Atlantis has undocked from the orbiting international science laboratory for the final time in her career. Meanwhile, should mission managers deem necessary, a week’s worth of investigation into the L3D thruster heater failure has produced a potential workaround for the failed “off” heater during post-undock operations.

Following a week of docked operations, orbiter Atlantis has completed her 11th and final docked mission to the International Space Station, capping an amazing career of 18 total dockings to MIR and the ISS (7 to MIR and 11 to ISS).

Currently, Atlantis will spend two more days in Low Earth Orbit, with the all-important late-inspection of the ship’s RCC (Reinforced Carbon-Carbon) WLE (Wing Leading Edge) panels and Nose Cap occurring on FD-11 (Monday). Then, on FD-12, Atlantis’ crew will begin preparing their ship for reentry by testing the various systems they will use for Entry, Descent, and Landing and reconfiguring Atlantis’ middeck for entry.

Finally, on FD-13 (Wednesday), Atlantis will – weather permitting – return to her home at the Kennedy Space Center with a mid-morning landing at the Shuttle Landing Facility.

However, Atlantis’ crew may have to place Atlantis into a slightly different orientation during certain portions of the post-undock timeline to accommodate the need to maintain thruster L3D’s temperature since that thruster’s heater has failed “off.”

According to the Mission Evaluation Room (MER), the L3D thruster heater failure is classified as MER-02 – or the second MER problem recorded during Atlantis’ STS-132/ULF-4 flight.

Both the L2D and L4D thrusters – the adjacent thrusters – performed nominally with standard heater activation when their injector temperatures reached ~75 deg F.

“From the observed rate of temperature decline (approx. 1 deg/hr) the jet temperatures were not predicted to drop low enough to produce thruster leakage or trigger a Fail Leak RM alert overnight; therefore, no vehicle attitude or jet priority changes were performed prior to Crew Sleep,” notes the MER document.

“For a failed off heater, thermal analysis has shown that the valve temperature is ~ 5 deg F warmer than the injector temperature instrumentation,” notes the MER-02 problem report. Because of this finding, an OMRSD requirement was instated (back in the 1980s) to ensure that the thruster valve temperatures are maintained above 50 deg F during ground processing – a rule carried over into on orbit operations.

For the thruster on Atlantis, the document notes that the next worst case failure would be a ‘Fail Leak.’ “Sufficient redundancy exists – two other thrusters on the same side and direction (L2D & L4D) – such that no special procedures are required.”

Nonetheless, should a leak occur, the propellant loss or contamination could be staved by closing the L3 manifold isolation valves.

“Per flight rule C2-2C, the manifold would be closed immediately regardless of the injector temperatures if the jet is suspected to be leaking due to contamination concerns.” 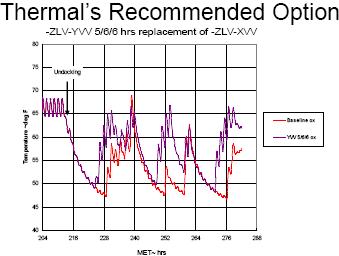 Closure of the manifold would result in the loss of the L3L and L3A thrusters as well as the L3D thruster; however, two redundant thrusters would still be available in each of the affected directions.

Failure of the L3D thruster during the docked portion of the mission was negated due to the mated beta angle which prevented the L3D thruster temperature from dropping below approximately 50 deg F.

However, a greater degree of uncertainty exists in the post-undocking timeframe. “Drain panel heater cycling, which warms L3D injectors about 4F per cycle, is expected in the post undocking -ZLV -XVV attitudes, but the exact duty cycle is hard to predict due to several attitude changes,” notes the MER document.

Due to these uncertainties, temperatures as low as 40 deg F could be had in the post-undocking timeframe.

However, “Thruster temperature can be maintained with the nominal thermal environment, thruster firings, and attitude changes.” 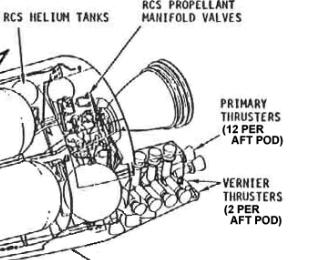 If this were to happen, there would be no serious impact to the remainder of Atlantis’ mission and a Nominal End of Mission (NEOM) would be carried out thanks to the redundancy provided by other thrusters.

Therefore, since a loss of the L3D thruster would still result in a NEOM, the MER problem report indicates that any off-nominal thruster firing or orbiter attitude change to maintain thruster temperature would likely be declared unnecessary by the Flight Control team.

This thought of declaring specific action to maintain thruster temperature as unnecessary was confirmed by the MOD (Mission Operations Directorate) and PROP (Propellant) console in Mission Control in a FD-8 presentation by OMS/RCS – also available for download on L2. 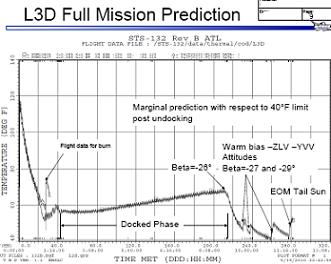 “Recommendations: Place thruster in last priority after [ISS] flyaround and take no further actions since predictions are that L3D will remain above 47 deg F.”

However, “Due to analysis uncertainty, it is prudent to determine alternate attitude(s) that could be used if updated analysis predicts lower temps or if actual behavior varies from predicted”

However, a change to the nominal post-undock attitudes would mean an increase in potential MMOD (Micro-Meteoroid Orbiting Debris) risk.

According to the FD-8 OMS/RCS report, “Vehicle attitude changes to place L3D in warmer Environment [would result in] increased MMOD risk.”

The increased risk would translate to approximately 5%, from 1:379 to 1:361 – still well within the acceptable risk matrix for the SSP (Space Shuttle Program).

Furthermore, full data readings on the health of the L3D and other shutdown thrusters would be maintained through EOM (End of Mission) since the thruster’s instrumentation is not affected by the heater failure.

STS-132: Atlantis and the ISS set to bid farewell for likely the final time