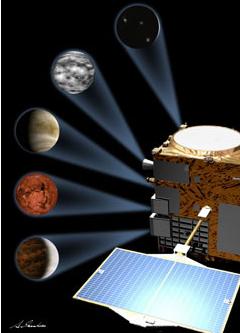 The Japanese Space Agency JAXA have launched the Venus Climate Orbiter “AKATSUKI” and the Small Solar Power Sail Demonstrator “IKAROS” – along with several university-developed secondary payloads – via their H-IIA Launch Vehicle. Launch from the Tanegashima Space Center (TNSC) on Thursday was originally scrubbed due to unacceptable weather earlier in the week.

The H-IIA Launch Vehicle No. 17 is a “H2A202” model with two solid rocket boosters (SRBs). The fairing design is 4S (4 meters in diameter.) Mitsubishi Heavy Industries, Ltd. is in charge of the launch service of the H-IIA.

The vehicle is set to release its main payload, the Venus Climate Orbiter “AKATSUKI” (AKATSUKI), into its scheduled orbit first, before injecting five other secondary payloads into their respective orbits.

AKATSUKI (PLANET-C) is the next planetary exploration project for the Martian orbiter NOZOMI. This project’s main purpose is to elucidate the mysteries of the Venusian atmosphere.

“Though often referred to as Earth’s sister planet in terms of size and mass, Venus is actually very different. It is veiled in carbon dioxide, with a high temperature and thick sulphuric-acid clouds,” noted the mission overview.

“Clarification of the causes for this environment will provide us with clues to the understanding of the birth of Earth and of its climate changes. Therefore, Venus is a very important subject for exploration.

This wide variation in distance will enable comprehensive observations of the planet’s meteorological phenomena and of its surface, as well as observations of the atmospheric particles escaping from Venus into space,” added overview materials. “It will also be possible to take close-up photos of Venus, and to observe the storm winds that blow on the Venusian surface, at speeds that reach 100 m a second – 60 times the speed at which Venus rotates.

“This phenomenon remains the biggest mystery of Venus, as it cannot be explained meteorologically. AKATSUKI will employ infrared light to observe and elucidate the mysteries surrounding the atmosphere under the clouds and the conditions on the planet’s surface. In addition, it will confirm the presence of active volcanoes and thunder.”

IKAROS (Interplanetary Kite-craft Accelerated by Radiation Of the Sun) is a Solar Sail that gathers sunlight as propulsion by means of a large membrane. The IKAROS mission aims at verifying that a spacecraft can fly only by solar powered sail, and that thin film solar cells can generate power.

The deployment is in two stages. The first stage is carried out quasi-statically by the onboard deployment mechanism on the side of the main body. The second stage is the dynamic deployment. As this deployment method does not require a strut such as a boom, it can contribute to making it lighter and thus can be applied for a larger membrane.

Also flying as a secondary payload is UNITEC-1 – classed as the world’s first deep space satellite via university development. 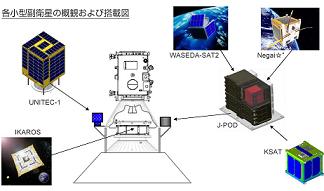 The three satellites, WASEDA-SAT2, KSAT, and Negai have been installed on the JAXA Picosatellite Deployer (J-POD).

The H-IIA F17, which will be launched from Launch Pad 1 of the Yoshinobu Launch Complex, will fly over the Pacific Ocean, then jettison its solid rocket boosters, the payload fairing, and the first stage.

The H-IIA will continue its coast flight and separate the IKAROS and UNITEC-1 from the Payload Attach Fitting (PAF900M, the PAF primarily for the main payload, AKATSUKI.)