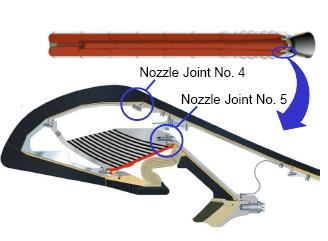 As the countdown begins for STS-132, mission managers are continuing to review the status of Atlantis’ hardware, using the baseline of the Flight Readiness Reviews (FRRs). In particular, certification of the STS-132 SRBs and RSRMs for flight was aided by the clean performance of both SRBs/RSRMs on STS-131 – with only one SRB IFA (In-Flight Anomaly) declared for the critical vehicle component during last month’s flight.

With excellent timing, engineers cleared the outstanding IPR (Interim Problem Report) relating to the calibration of a sensor, while the only new IPR over the past few days – associated with the Left Reaction Control System (LRCS) – is of no issue for the flow.

With the regulator deemed to be in a good condition, engineers completed S0071 operations to pressurize the systems for flight, which was followed by the closure of Atlantis’ Payload Bay Doors (PLBDs) for the final time ahead of launch.

S0007 Launch Countdown preps worked through a nominal flow towards Call To Stations (CTS), 30 minutes prior to the start of the count – which began at 4pm Eastern.

When Atlantis launches, the STS-132 stack will boast two changes to the RSRMs (Reusable Solid Rocket Motors): a new fluorocarbon O-ring V1288 in nozzle joints 4 and 5 and the incorporation of V1288 O-rings in the Igniter Gaskets.

In terms of the Nozzle Joints, “Incorporated V1288 fluorocarbon O-rings in nozzle joints 4 and 5,” notes the RSRM portion of the SPP (Space Shuttle Program) FRR from April 28 – a presentation available for download on L2.

Since a new material (dubbed V1288) as available after its creation to “[improve] resiliency … for field joints,” it was decided that using the V1288 material would simplify the manufacturing process for the supplier while increasing safety at the nozzle joints.

Approval for the new V1288 O-rings for nozzle joints 4 and 5 was certified based on the material properties of the V1288 being equal to or greater than the V1247 as well as the fact the “2x tracking requirement still met for joint no. 5 (dynamic).”

Moreover, the new V1288 O-rings decrease the erosion rate at the nozzle joints.

As such, the new O-rings in nozzle joints 4 and 5 are safe to fly on STS-132 and subsequent flights. 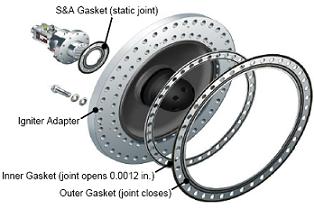 The second change to debut on STS-132’s RSRMs is the incorporation of the V1288 O-rings in the Igniter Gaskets.

The reason behind this change also comes from the obsolescence of a V1944 (V1247) ingredient that required a requalification or a new material (Chemlok 8116) “specifically designed for peroxide cure elastomers.”

The new material (Chemlok 8116) and integration of the V1288 O-rings were verified for flight based on the fact that the metal retainer design, material, and fabrication processes were not changed from the previous design. 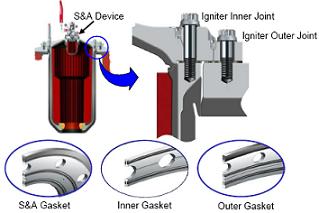 Furthermore, the physical dimensions of the gasket sealing elements were not changed and the material properties of the V1288 material “[met] specification requirements for V1944” and have been shown to be better than or equivalent to the V1944 O-rings.

Tests on the compression-set of the new design support all stack-life and age-life requirements. Moreover, numerous bounding dynamic pressure tests indicate that the sealing capability of the V1288 O-ring gaskets is “better than V1944 gaskets with the 1.4x tracking requirement still met.”

The safety and operation of the new design for V1288 S&A and inner gaskets were demonstrated on LAT 85-A and 85-B.

The S&A gaskets were further verified during the static test firings of TEM-13 (Technical Engineering Motor 13), FSM-15, Ares DM-1, and FSM-17 without issue.

As such, STS-132 and subsequent flights are safe to fly with the new igniter gaskets seal design.

Following the highly successful STS-131 mission by orbiter Discovery last month, the standard IFA review of the entire vehicle revealed only one issue with the SRBs on that flight. 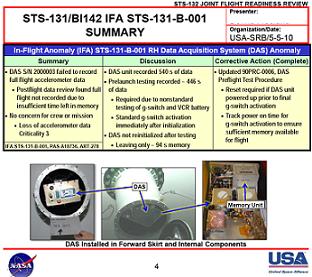 According to the SSP FRR presentation, the DAS (serial number 2000003) did not record full flight accelerometer data.

During a post-flight data review, it was discovered that the full flight data was not recorded due to “insufficient time left in memory,” notes the SRB presentation.

In all, the DAS recorded 540-seconds of accelerometer data – with 446-seconds of the data coming from pre-flight testing. After this ground testing was complete, the DAS was not reinitialized, leaving only 94-seconds of memory remaining for in-flight recording.

Nonetheless, to ensure that this problem does not reoccur, a new Preflight Test Procedure Reset will be required if a DAS unit is powered up before the final g-switch activation. Furthermore, “Track power on time for g-switch activation to ensure sufficient memory available for flight” will also be performed notes the presentation.

In addition to this potential change for STS-132’s SRBs, there were (at the time of the SSP FRR on April 28) 3 open problem reports, or nonconformances, with the STS-132 SRBs.

These nonconformances – all of which will be managed or accepted as is with paperwork before launch – include a discrepancy in the Bolt catcher Thermal Protection System width dimensions, a DAS unit access plate Changeout, and an unapproved electrolyte and neutralizer performance in an Auxiliary Power Unit (APU) part.

In all, the STS-132 stack’s SRBs and RSRMs have been cleared for flight on Friday with Atlantis on the 34th Space Shuttle mission dedicated to construction and outfitting of the International Space Station.