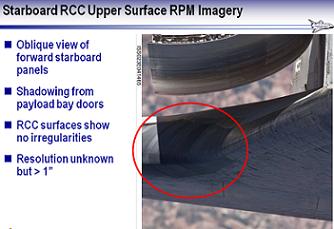 The Damage Assessment Team (DAT) arm of the Mission Management Team (MMT) are no strangers to high praise for their work in ensuring an orbiter is safe to return home, and once again they have proved their worth – as they worked through an array of imagery, data, and historical experience to fill in the gaps of imagery coverage related to Atlantis’ Wing Leading Edges (WLE).

Atlantis is coming to the end of her docked phase of the mission, currently her final visit to the International Space Station (ISS), with only three minor Mission Evaluation Room (MER) items, and three “funnies” – which points to an extraordinary performance from the vehicle.

With the mission right on the timeline, Atlantis and her crew can look forward to undocking at the weekend, in preparation for a return home next week.

“Flight Day 8: EVA-3 by Good and Reisman, R&R the remaining batteries on P-6 truss. Retrieve spare Power Data Grapple Fixture from the sidewall of Atlantis’ PLB and bring it inside ISS with them. Canadarm-2 returns the Integrated Cargo Carrier (ICC) to the Mobile Base System attachment device.

The only addition to the items of interest at the MER related to the Payload and General Support Computer (PGSC), again a relatively minor issue with zero mission impact.

“MER Items: No new. Funnies: PGSC Monitor Lexan Filter Cracked – Crew reported that the RPOP1 PGSC monitor filter was cracked, but no loose parts as a result of the crack,” added status, with a full overview article on Atlantis’ systems to be published at the weekend.

With the repair of the OBSS’ Pan Tilt/Unit (PTU) confirmed, the need for inspections whilst docked with Station – to double check areas lacking full coverage during the gathering of Flight Day 2’s imagery – was dismissed as an option by the MMT, allowing for a nominal Late Inspection of Atlantis’ Thermal Protection System (TPS),

However, getting to the stage where ascent related damage concerns were allayed, took a little more work than the usual diligence and hard work of the DAT and related SSP (Space Shuttle Program) engineers.

This was due a mix of several issues related to the imagery coverage, via the lack of LDRI (Laser Dynamic Range Imager) imagery on areas of the Wing Leading Edges (WLE), shadowing of the RCC panels during FD3’s RPM, along with a potential impact on panel 6R – picked up by the WLE IDS (Impact Detection System).

The wording may appear dramatic, though this is usual for engineering discussions, given the work ethic of evaluating to the worst case scenario as a safety net for margins of error.

“WLEIDS registered 1 potentially critical ascent impact on the WLE. Likelihood of critical damage due to this impact is assessed at ~1 in 20,000,” noted one of several presentations on the status of inspection data for Atlantis (available on L2).

“WLEIDS is unlikely to produce ‘false negatives’. That is to say based on test, analysis and flight experience with the WLEIDS, it is unlikely that we were critically hit and did not measure the response (~1 in 1000 likelihood of false negative given potential for max Q signal masking).”

Indications from the WLEIDS are usual for every mission, but it is also commonplace for the indications to be caused by vibrations in the panels during ascent – such is the sensitivity level of the sensors.

In order to dismiss actual impacts, engineers rely not only on the imagery of the panels during inspections, but the ascent imagery footage – in order to cross-reference debris liberations with potential impacts.

“While the available imagery data does not meet the inspection requirements for much of the WLE RCC surface area, large, ascent related critical damages are expected to be observable,” added the presentation, noting it would be obvious if damage was sustained by a panel.

“Network of narrow, but long cracks and coating loss are expected for critical damage due to foam or ice impact. Critical damages below the inspection criteria are only expected to be produced by high density debris sources such as metal or ablator. These are NOT expected debris sources.” 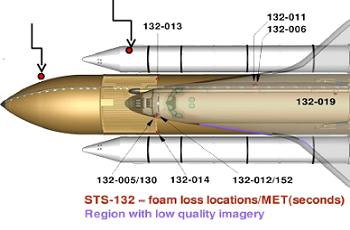 “SRB recovery report indicated no unexpected debris losses. All available ground based, ET and crew handheld imagery yielded a total of seven foam impactors which potentially have transport to the WLE/nosecap RCC. No imagery observations of debris contact with the WLE/nosecap RCC. Popcorn foam impacts are likely, but not likely to result in critical RCC damage.

“A DTA (Debris Transport Analysis) of these seven sources was performed and compared with RCC impact tolerance thresholds. NDE (Non Destructive Evaluation) detectable damage is not credible for 5 of the 7 debris sources (-005, -011, -012, -013, -024). Assuming an impact and worst case release time, NDE detectable damage is not probable for potential debris source 132-006.” 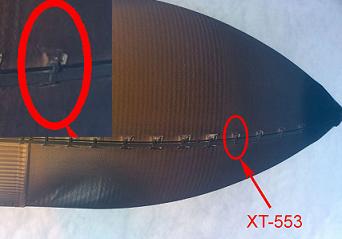 The ET IFR foam loss can be seen in hi res images of the tank after separation, although it is – like the rest of the tank – only one of a very small number of minor liberations from what was an extremely ‘clean’ tank. Regardless, nothing is ever left to chance with regards to liberation events.

“Assuming an impact, worst case release time and that the observed loss liberates as one mass, NDE detectable damage would be expected on STBD (Starboard) panels 5-19 due to debris source 132-026. Impacts from -026 on STBD panels 1-4 and 20-22 would be below the impact tolerance capability,” added the presentation, which added that the foam loss from the IFR might even be simple ‘erosion’ of the surface foam, which is common for the ramps.

“Indication is assumed to be a foam release, imagery still working to determine if this is a release event or erosion. Assumes impact occurs at worst time because release time is unknown.” 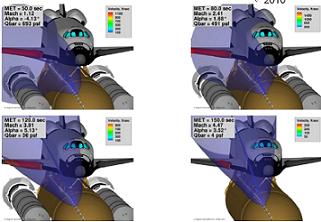 In conclusion, the presentation confirmed the findings did not warrant any concern of a damaging impact on the RCC panels – especially in relation to the IFR foam loss, as they tend to break apart, as opposed to liberating in one piece – thus removing any need to inspect the WLE via a docked inspection.

“STBD panels 5-19 could experience a critical impact if the -026 debris source struck as one mass. Preliminary assessment is that the divot was formed due to erosion/ablation and so would not pose a critical damage threat.”

Another sign of how prepared the Program engineers are for contingencies can be seen via later pages in the presentation, which had already pre-empted plans for a NOAX repair to the RCC panel, had data – or later imagery – shown there was indeed damage to the panel.

That option remains – as does returning to the ISS – if a serious problem is found via Late Inspections, inspections which will finally gain the full use of the LDRI following the PTU repair, allowing for DAT engineers on the ground to once again carry out their methodical Level I, Level II and peer reviews, prior to the final clearance for Atlantis to return home safely.