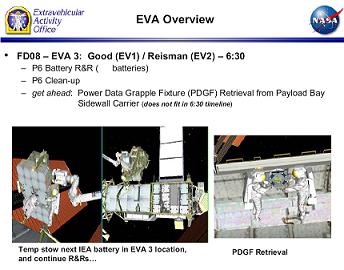 Following a spectacular performance by Steve Bowen and Mike Good during a packed EVA-2, STS-132’s final planned space walk was completed in a similar fashion. Meanwhile, Mission Managers are reviewing the Wing Leading Edge Impact Detection System (WLE IDS) sensor information from Atlantis’ ascent one week ago in an effort to perpetuate understanding of the impact detection system.

Following a stellar EVA-2 outcome, in which an OBSS PTU cable was dislodged and four (4) of the six (6) P6 truss batteries were R&Red (one more than anticipated going into the mission), flight planners have re-tooled their plans for the mission’s third and final spacewalk.

The completion of four P6 battery R&Rs freed up time during the 3rd EVA, allowing for the addition of the installation of P4/P5 NH3 (ammonia) jumpers – a 15-minute procedure – and 25-minutes of “get ahead” tasks.

FD-8 for the Atlantis crew began at 0150 EDT with Atlantis/ISS crew wakeup to the song “Traveling Light” by JJ Cale.

Mike Good (EV-1) and Garret Reisman (EV-2) began a short hygiene break around 0230 EDT before moving back into the Quest Airlock for final EVA preparations at ~0315 EDT.

Then, about 10-minutes before the start of the Crew Lock depressurization, crewmembers inside the ISS will moved the SSRMS (Space Station Remote Manipulator System) – with the ICC-VLD attached – to the P6 worksite.

While the official start of the EVA scheduled for 0645 EDT, when Reisman and Good take their spacesuits to battery power, the STS-132 crew has consistently worked about 15 to 30-minutes ahead of the pre-EVA timeline, as was the case with EVA-3 – with a start time of 0627 EDT.

Following Crew Lock egress, Reisman and Good translated out to the P6 truss where they spent ~30-minutes removing battery 5 from its location on the P6 truss and installed it onto the work pallet.

Following this activity, Reisman and Good “installed temp stowed battery” before heading into the one hour long P6 worksite cleanup – a cleanup timeframe increased from 30-minutes from the pre-mission timeline.

Then, Reisman and Good then moved on to the first of the added activities of EVA-3: installation of the P4/P5 NH3 (ammonia) jumper. This 15-minute procedure led directly into the one hour retrieval of an Orbiter PDGF (Power Data Grapple Fixture).

During the PDGF retrieval, the SSRMS maneuvered the ICC-VLD to a Payload ORU (Orbital Replacement Unit) Attachment where the ICC-VLD will be temporarily stowed.

Reisman and Good were then allotted 25-minutes for “get ahead” tasks before beginning EVA cleanup operations and ingressing the Quest Air Lock.

Spacesuit servicing pickuped about 10-minutes after Airlock repressurization begins. Then, the Atlantis crew will head to bed at 1749 EDT, wrapping up FD-8.

As is standard procedure in the post-Columbia era, the Wing Leading Edge Impact Detection System (WLE IDS) data from Atlantis’ Wing Leading Edges was downlinked to the ground for review by the WLE IDS team.

According to a presentation dated May 18, 2010, the WLE IDS Ascent Analysis Review – available for download on L2 – notes, “Ascent monitoring is performed under a highly dynamic environment.” 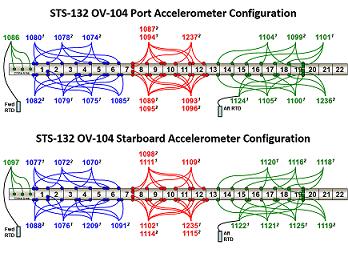 Due to the sensitivity of the WLE IDS (a necessity to ensure that all potential and actual impacts are detected by the system), nominal vibrations from ascent caused by the aero-acoustic environment, SSME (Space Shuttle Main Engine) and SRB ignition, Max Q, and SRB/ET separation are all detected by the system.

Separation of these non-impact events from potential impact events from the raw WLE IDS data falls to the WLE MER (Wing Leading Edge Mission Evaluation Room) engineers who “[analyze] the ascent data to determine if an impact has occurred, and if so, [determine] time, location, and severity.”

This review process consists of two stages: Summary of data analysis for identification of Areas-of-Interests (AOIs) and raw data analysis at corresponding half-second “response windows” at those AOIs. 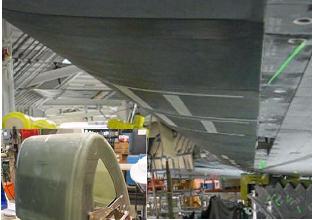 Furthermore, the WLE IDS is designed to report all potential impacts or signatures greater than 1 Grms – as approved by the Orbiter Project Office.

“Threshold defined as response level below which there is a high confidence of no damage. Determined by test-based PRA with large safety factor and confirmed by model-based PRA,” notes the Ascent Review presentation.

However, one of the challenges surrounding the data review from the WLE IDS is the false indications that can arise throughout the system as the vehicle passes through the area of “high Q.”

“Aero-acoustic excitation is expected to elevate impact Grms response above noise,” notes the presentation. “For this flight, risks of assumed impacts at Max Q are below 1/500.” 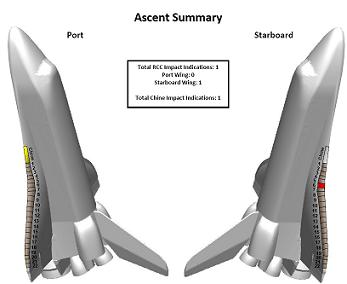 For STS-132, the presentation notes that the only RCC (Reinforced Carbon-Carbon) panel impact indication was on panel 6R (panel 6 on the Starboard – or Right-hand – wing) with a correlated risk placement in category I and a probability risk of impact/damage less than 1/1000.

However, further complicating matters on STS-132 is the fact that a snagged cable on the OBSS (Orbiter Boom Sensor System) prevented the crew from completing the customary focused inspection of Atlantis’ Starboard RCC panels during FD-2 (Flight Day 2).

Upon review of the WLE IDS data, a comprehensive chart was developed to chronicle the maximum Grms indications for each of Atlantis’ 44 RCC panels (22 on each wing).

Since an inspection of all the Starboard RCC panels was not accomplished on FD-2, and subsequent imagery obtained via the RPM (R-bar Pitch Maneuver) and EVA-1 was not of high enough resolution to completely clear all the panels and missing imagery regions, a series of conservative assumptions were incorporated into the “assumed impact risk at Max Q” data chart – Max Q being the moment when any impact to the RCC would be the most critical. 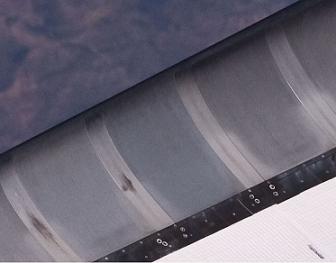 In essence, the conservative assumption is this: Since all RCC panels have not been thoroughly inspected, a conservative matrix is employed to determine maximum possible damage to the RCC based on maximum recorded Grms indications from the WLE IDS on each RCC panel and further assumes that those max indications were registered at Max Q.

Then, each RCC panel (with panels 1-5 and 17-22 on each side of the vehicle grouped together) is divided into three sections: Upper, Apex, and Lower. After this, the maximum Grms indication for each RCC panel was applied to each section of each RCC panel to determine what category of probable damage the sections of the panels fall into.

Again, the maximum registered Grms on panel 8R was 1.54 Grms and did not necessarily occur at Max Q. Likewise, the placement of Panel 8R Apex into Category III does not mean that damage has occurred to that panel, only that under the most extreme set of conditions the likelihood of damage is between 1/500 and 1/200.

These panels will all gain another inspection via the post undocking Late Inspections – per the nominal timeline, as accepted by the MMT.

*A full overview focusing on MMT documentation that noted the need to clear an event that held the “potential for critical damage” – whilst explaining how it is highly unlikely that Atlantis suffered such an event – will be published after the completion of EVA-3.