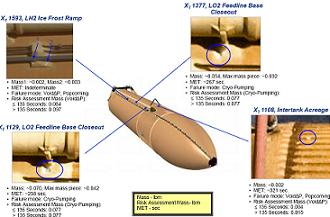 Wednesday’s Agency Flight Readiness Review (FRR) has approved a May 14 launch date for STS-132, following a very smooth meeting at the Kennedy Space Center (KSC). Among the topics discussed was the mitigation efforts on the problem of foam liberation from the External Tank (ET) intertank region, which has been classed as a resounding success, based on the results from STS-131’s tank.

A minor issue caused specialist engineers to head to Pad 39A on Wednesday, as they inspected a thermal barrier that will require repair on the left vent door. After ensuring a repair held no “mechanism problems” for the area in question, work will be carried out during the nominal pad flow.

“S1005/S1006 LOX/LH2 Dew point and conditioning being performed. S0007 Launch Countdown preps are in work and will continue through the week.”

With the Agency FRR sailing through the review – with no dissent on any of the items of interest – Atlantis will make her opening launch attempt on May 14, with the short window closing on May 18 – showing the importance of achieving a smooth pad flow that has held only one contingency day in the bank since rollout.

The performance of the External Tank – both ahead of flight and during the ride uphill – is one of the key areas of interest for the Shuttle Program, with not only the primary role of supplying propellant to the three SSMEs (Space Shuttle Main Engines), but also the requirement of avoiding serious liberations of its Thermal Protection System (TPS) foam, which hold the obvious threat of impacting and damaging the orbiter.

Massive strides have been made on mitigating foam loss since Return To Flight, with several phases of redesign being carried out on various areas of the tank over recent years – the latest of which flew with STS-131’s ET-135.

A sign of the progress made on the tanks can be seen via the report that only five areas of foam loss were recorded on ET-135 – resulting in one of the ‘cleanest’ tanks ever to fly.

“Five (5) TPS debris events observed in imagery. All observations consistent with physics-based understanding and process control verification data,” added the FRR presentation, adding that only one area of the intertank liberated during ascent, as opposed to numerous areas – as has been the problem on recent flights. 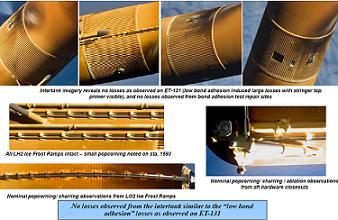 The lack of liberations from the intertank is proof-positive that a mitigation plan – created by engineers tasked with investigating the foam loss events – has worked, following a large effort to investigate the root cause of several flights-worth of multiple liberations from this area of the tank.

Firstly, engineers found that the liberations were being caused by contamination making its way on to the structure of the intertank, prior to the application of foam. This in turn reduced the adhesive properties, leading to foam shedding during the aerodynamic stresses of ascent. 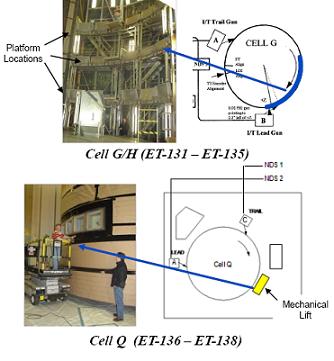 A change to the production procedures at the Michoud Assembly Facility (MAF) was ordered, following an investigation that found the cleaning process on the intertank was obstructed by platforms used by the technicians tasked with removing all of the dust contamination, prior to the application of foam.

This change proved to be highly beneficial for ET-135, as the intertank foam losses were greatly reduced. 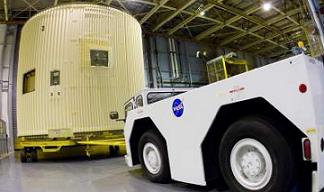 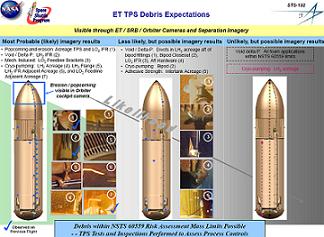 The excellence in mitigating foam loss issues throughout the remainder of the program backs up the aim – noted several times by shuttle managers – that it is their intention to end the program with the cleanest tank in history.