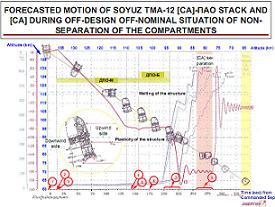 However, no issues have been suffered with the vehicle since an investigation found that the most likely cause of the previous failures related to an open the latch located at ‘Plane I’ interface, much to the relief of all concerned, not least NASA, who will be relying on the Russian vehicle for several years after the retirement of the space shuttle.

Following undocking from the International Space Station (ISS), Kotov, Noguchi and Creamer only have a matter of hours to prepare for re-entry – unlike the several days it takes for a shuttle orbiter to return home. The crew were already wearing their Russian Kentavr anti-G suit under their Sokol suits.

Russian crewmembers are also advised to ingest fluid-electrolyte additives, viz., three sodium chloride tablets during breakfast and after the midday meal, each time with 300 ml of fluid, and two pills during the meal aboard Soyuz before deorbit.

The landing is expected at 11:25 Eastern, around 145 km away from the city of Dzheskazgan, Kazakhstan. Airplanes and helicopters are on duty around all estimated landing spots – 12 in total – in the event of a ballistic landing.

The return of Soichi Noguchi will likely be missed by several hundred thousand members of the public, following his unique uploading of images of various landmarks on Earth during his stay onboard the ISS.

The Russian launch system Rockot is tailored to payloads requiring a performance of at least 1,950 kg for launches into Low Earth Orbit (LEO). The three-stage liquid fuelled rocket has dedicated launch facilities at Plesetsk Cosmodrome under the control of Eurockot. 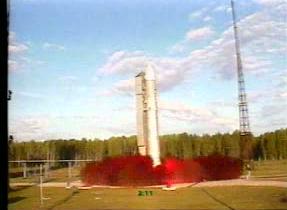 SERVIS-2 is an acronym for the second spacecraft in the “Space Environment Reliability Verification Integrated System” programme. The spacecraft was designed and built by USEF (Institute for Unmanned Space Experiment Free Flyer) of Tokyo, Japan, under a contract from the Ministry of Economy, Trade and Industry (METI) and the New Energy and Industrial Technology Development Organisation (NEDO).

The purpose of SERVIS-2 is the verification of commercial off the shelf (COTS) parts and technologies in the severe space environment, thus establishing evaluation and equipment design guidelines to use COTS in space.

SERVIS-2 has a mass of some 900 kg. Rockot will launch the spacecraft into a sun-synchronous orbit of 1,200 km altitude.