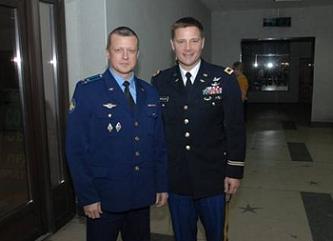 ISS veteran Fyodor Yurchikhin, NASA astronaut Douglas Wheelock and first time flying Shannon Walker have launched on a three day journey to the International Space Station (ISS), after their Soyuz TMA-19 lifted off at 5:35:19 pm EDT from the Baikonur Cosmodrome in Kazakhstan. They will spend three days on orbit ahead of docking with the Station.

The launch vehicle lofting the Soyuz TMA-19 into orbit is the Soyuz-FG. The vehicle was introduced in 1966, deriving from the Vostok launcher, which in turn was based on the 8K74 or R-7 intercontinental ballistic missile. It has become the world’s most used space launcher, flying over 850 times.

This launch will achieve the milestone of 100 flights in support of the ISS since the orbital outpost began its life in 1998.

“The ballistics team has finalized our trajectory and has set the precise time of launch at 03:35:19, local Kazakh time, in the early morning hours of June 16th,” wrote Col. Wheelock in an expansive report to controllers at the Johnson Space Center (L2).

The shuttle veteran, and US Army Colonel, spoke about his awe of not only being involved with a highly historic space program, but also his dream of working with a former Cold War enemy.

“Kind of surreal knowing that as an active duty Army officer, I will pass this spot on my way to the launch pad. What incredible changes we have seen in just a generation. It excites me to think of what our children and grandchildren will witness in the next 50 years.

“Having spent time at West Point and my early years as an Army officer during the ‘Cold War’, it is quite literally like a dream come true to be training here with our Russian partners.

“What an incredible experience, here in Baikonur, where the impossible dream of space travel first took flight.

“You can feel the spirit of those early days of Sergei Korolev’s vision and the launch of that first ‘R-7’ rocket in October of 1957, the space shot that carried ‘Sputnik’ (Russian for ‘Satellite’) and ignited the space race. 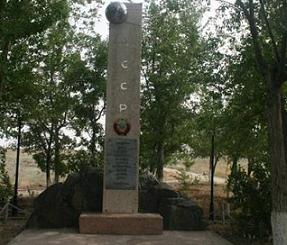 “It is so incredibly humbling standing at that same launch pad and knowing that what happened here, so many years ago, inspired a generation of engineers, scientists, space explorers, and dreamers; at the same time terrifying nations.  About 200 meters from the launch pad, there is small grove of trees planted in the barren landscape, with this monument standing in silent reverence.

“Paraphrased the inscription reads, ‘On this site, the ingenuity and hard work of the Soviet people launched an assault on the cosmos’.”

The launch vehicle the trio are riding on consists of four boosters on the first stage, arranged around the central core and are tapered cylinders with the oxidizer tank in the tapered portion and the kerosene tank in the cylindrical portion. As in the entire Soyuz lower composite, the RD-107A engines of the boosters are powered by nontoxic liquid oxygen – kerosene propellants. 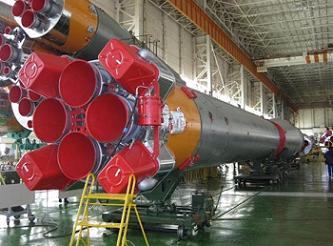 “When we left the processing facility, we got a chance to go the rocket assembly building to see the 1st, 2nd, and 3rd stages of the rocket body before assembly,” added Wheelock. “Very impressive! The business end of the Soyuz rocket is complete with 20 main engine nozzles and 12 gimbaling vernier thrusters.

“All of these engines are liquid-fueled and burn kerosene and liquid oxygen. The four ‘1st Stage’ boosters are assembled around the central core. Following liftoff the boosters burn for 118 seconds and then are jettisoned, much like the solid rocket boosters on the Space Shuttle. The central core is the ‘2nd Stage’ and will continue burning for 290 seconds. The ignition sequence of the 1st and 2nd Stages occurs 20 seconds prior to liftoff. Should be a great light show!

“I’ve heard this described as the most eye-watering part of the ascent phase, when these engines light and you shed the weight of the central core, there is a pretty ‘sporty’ g-force onset. The 3rd Stage burns for 240 seconds, and after main engine cut-off, in just less than 9 minutes, you are in Earth orbit traveling 17,500 mph, about 5 miles per second!” 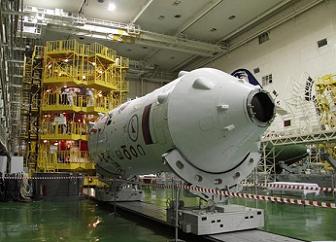 “It will take us a little more than two days to get to the International Space Station, and our docking is scheduled for Thursday evening, June 17th, at 18:25 (6:25pm) EDT;  17:25 (5:25pm) CDT,” added Wheelock. “Our 6-month expedition will take us into December, and we hope to be back to the Earth, and back home in the States by Christmas.

“We currently have 2 EVAs (spacewalks) scheduled in August, so I’ll get another chance to go ‘outside’ again, first on August 5th, and the second 12 days later on August 17th. Thank you again for your continued support, I’ll look forward to sharing the experiences over the next six months with you, my family and friends. Many greetings to everyone! Light the fire!”