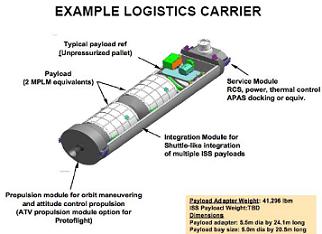 As part of the comprehensive 700+ page study of a truly Shuttle Derived Heavy-Lift Vehicle (SD HLV), a preliminary assessment of an SD HLV’s capability to deliver cargo (and potentially crew) to International Space Station (ISS) has been performed, demonstrating the first part of an SD HLV’s multi-use potential should this vehicle be chosen as America’s new Heavy Lift vehicle in 2015 (in accordance with President Obama’s current timeline for America’s future in space).

The first review to gain mention in the SD HLV presentation was the vehicle’s potential use for logistics transfer of 45 to 65 metric tons – depending on the configuration of the payload flown – to the ISS, a payload to ISS capability that far exceeds any existing vehicle for ISS resupply efforts.

To begin the logistics transfer operation, the SD HLV would be inserted into a preliminary orbit of 30 x 120 nm using the combined thrust of two 4-segment SRBs and three SSMEs (Space Shuttle Main Engines).

An ISS logistics carrier, with an RCS and propulsion module attached, would then conduct the necessary course adjustment burns to complete phasing, approach, and docking operations with the Station between two and four days after launch.

Given the large “payload/large volume capabilities” that the SD HLV would provide, the opportunity to manifest multiple ISS logistics payloads would be a crucial ability of the vehicle.

In correlation with this assessment, the presentation notes some of the potential payloads that could be launched by the SD HLV, including numerous external components (such as Nitrogen Tank Assemblies, Ammonia Tank Assemblies, and control movement gyros), up to two MPLMs at one time, the European Space Agency’s (ESA’s) Automated Transfer Vehicle (ATV), Solar Alpha Rotary Joint components, solar arrays, as well as replacement radiators. 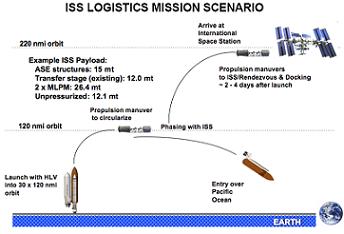 This logistics version of the SD HLV would use the existing SRB (Solid Rocket Booster) design, a propulsion module/payload carrier to deliver its payload to a preliminary Low Earth Orbit using three SSMEs throttled nominally at 104.5 percent, and a Logistics Carrier complete with propulsion module for orbit circularization, phasing, and rendezvous with the ISS.

However, in addition to purely logistics missions, the SD HLV could also be used to ferry crews AND cargo to and from the ISS.

During ascent, the CEV (Crew Exploration Vehicle) would ride on the top of the logistics carrier inside of the combined propulsion/payload module. A Launch Abort System tower would be fitted over the CEV to provide a critical ejection system that would yank the CEV away from the SD HLV stack in the event of a launch mishap.

The first stage of flight would utilize the existing twin SRB design combined with three SSMEs on the propulsion module of the SD HLV.

Following SRB staging, the payload fairings and Launch Abort System would be jettisoned at T+250 seconds (T+4mins 10secs) at an altitude of 351 kft at Mach 8.08. 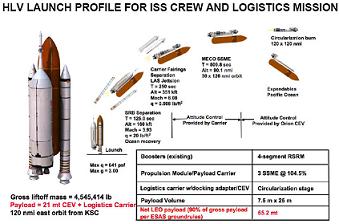 After proper phasing maneuvers, the Orion CEV would perform a series of propulsion maneuvers to rendezvous and dock the logistics carrier to one of the Pressurized Mating Adaptors (PMAs) on the ISS two to four days after launch.

Orion would then undock from the aft of the logistics carrier and dock to a separate PMA on the ISS.

As always, MOD would be responsible for launch through end of mission operations.

Concerns identified during the assessment phase include the command and control ability of the Orion/CEV on an SD HLV, hardware and software modifications for an Orion flight on SD HLV, and post-MECO control of the SD HLV stack by Orion from MECO through logistics carrier separation from the HLV. 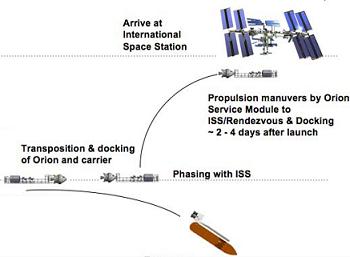 For the Orion SD HLV option, the Orion CEV would be the long pole item, with five other concerns currently listed in the “red.”

Furthermore, the assessment identified preliminary ISS cargo concerns, including the fact that ATV, HTV (Japanese Transfer Vehicle), and Russian Progress all support current ISS resupply requirements, and the potential modification of the Orion service module element to allow for payload resupply of ISS.

Furthermore, carrying the ATV as cargo would require hardware and software changes to the ATV as well as a potential new service module “to assist with control authority.”

Also, Orion and ATV sensor locations for proximity ops with the ISS would be blocked by the logistics carrier.