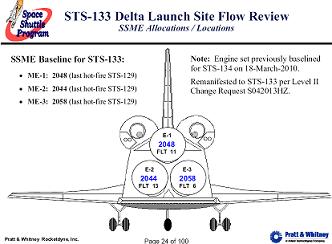 As mission planning efforts continue for Space Shuttle Discovery’s STS-133/ULF-5 flight to the International Space Station later this year, flight designers and mission managers have conducted a thorough review of all aspects of Discovery’s hardware and payload at the recently-completed Launch Site Flow Review (LSFR) in May.

At the June 10 Program Requirements Control Board (PRCB) meeting, managers approved the Change Request to extend STS-133 to a 11+1+2 days mission, with the addition of two EVAs. The move will result in the mission slipping to at least the end of October.

An article has now been published, based on the PRCB presentation (L2).

These components were originally manifested for the STS-134/ULF-6 flight with Endeavour back when that mission was scheduled to fly in July 2010 – before the STS-133/ULF-5 mission.

However, with the swap in flight order, the original 134/ULF-6 stack (ET and SRBs) were reassigned to Discovery and STS-133.

Furthermore, additional hardware manifest changes have occurred as a result of the mission order swap between STS-133 and STS-134. The Space Shuttle Main Engines (SSMEs) originally manifested for installation on Endeavour have been re-manifested to Discovery.

All of these engines underwent their last “hot-fire” during the launch of Atlantis and the STS-129 mission on November 16, 2009. 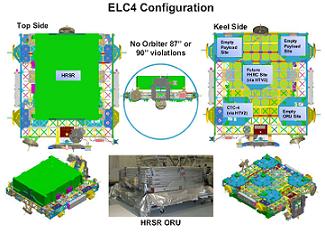 The HRSR will be installation onto ELC-4 for flight later this month.

All external Multi-Layer Insulation blankets and MDPSs have been removed from Leonardo and the CBM (Common Berthing Mechanism) seals have been replaced at this time.

A final cargo manifest “bench review” took place on May 19, after the compilation of the LSFR. Therefore, at the time of the LSFR, the PMM Leonardo was projected to have a launch weight of 21,555 lbs – a weight classification of “heavy.” 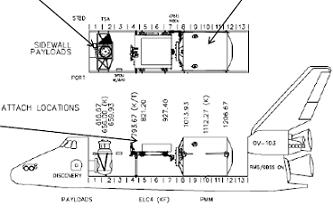 For the Discovery’s Payload Bay support of PMM Leonardo, this will be the first flight of an MPLM/PMM in the manifested Payload Bay position.

To berth the PMM Leonardo to Discovery’s Payload Bay, four (4) active longeron latches and one active keel latch will be used.

A ROEU (Remotely Operated Electrical Umbilical) will be used to provide “28V heater power, 124V for temp and pressure checks, and 1,553 for command/telemetry,” notes the LSFR presentation.

With the primary payloads and their Payload Bay locations identified, a “payload close clearance” review was performed and identified three (3) areas of concern.

Chit #6601 has already been developed for measurements of the ELC aft port and starboard scuff plates. All other measurements will have to be conducted at the launch pad after the payload has been installed into Discovery’s Payload Bay for launch.

Meanwhile, preparations are also underway on the various middeck payloads Discovery will carry to the ISS during STS-133. Among these payloads are a GLACIER unit, Commercial Biomedical Testing Modules 1 & 2, and two Mouse Immunology (MI) Animal Enclosure Modules.

However, one of Discovery’s landing case weight analyses did show a violation of landing weight criteria. For a Contingency Return case, Discovery’s weight would be 2,056lbs over the 233,000lbs limit.

Moreover, while payload upmass is of paramount importance on the STS-133/ULF5 flight, Discovery’s aft ballast boxes are currently manifested to fly “empty” during the mission. While these boxes add just over 100-lbs of weight to Discovery, the boxes cannot be removed at this time due to continued uncertainty in the payload manifest for STS-133.

In relation to these ballast boxes, NASA managers met earlier this month to discuss whether or not to add a LMC (Lightweight Multipurpose support structure Carrier) to Discovery’s payload bay to support either the return of a Nitrogen Tank Assembly or a Light Weight Adapter Plate Assembly (LWAPA) to Earth from the ISS at the end of the 133 mission.

The decision was made via a June 10, 2010 PRCB meeting not to manifest the LMC on STS-133 and not to return the Nitrogen Tank Assembly from ISS.As such, the payload bay support bridges and latches currently installed (from the STS-131 mission) to support the LMC will be removed to enable further weight reduction of Discovery – the heaviest of the remaining three orbiters.

However, the PRCB did approve the return of the LWAPA. As a result a sidewall support in bay 13 of Discovery’s Payload Bay will be added to support LWAPA return.

Likewise, a Change Request has also been submitted to replace the TriDAR DTO (Detailed Test Objective) with the Dragon Eye DTO.