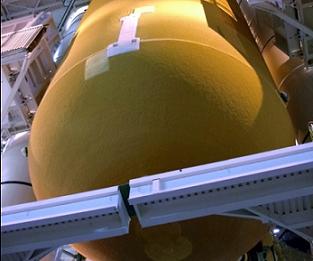 Engineers are working on finalizing mating operations on STS-133’s External Tank and Solid Rocket Boosters (SRBs), although it will be at least a couple of months until they are joined by Discovery. The veteran orbiter has welcomed her three Space Shuttle Main Engines (SSMEs), as the flow continues to push way ahead of the realigned launch date of the end of October.

It’s already been a busy week for what is currently Discovery’s final mission, with milestones taking pace inside both the Vehicle Assembly Building (VAB) and her Orbiter Processing Facility (OPF-3).

“The repair of the RH (Right Hand OMS) pod continues on schedule at the HMF (Hypergolic Maintenance Facility). Preps for tank mate on the STS-133 stack are in work at the VAB; will be retracting platforms.”

Installing the three SSMEs took around two days, starting with Engine 1, followed by Engine 3 and Engine 2. Other processing also took place at the same time as engineers worked on Discovery’s aft.

“ARPCS (Atmospheric Revitalization & Pressure Control System) testing is continuing and is scheduled for completion on Thursday. The payload premate test has begun and will be complete by Friday.”

The mating of what is currently scheduled to be STS-133’s ET (ET-137) and the twin SRBs took place on Tuesday, although work to hard mate the hardware is continuing through the week.

Very little has been noted on the potential of a swap in the mission order, which would see STS-133 moving behind STS-134 – as previously scheduled. However, the slips to what will be October 28 and February for the next two missions is all-but officially manifested by the Space Shuttle Program (SSP), and was even referenced as “targets” by KSC head Bob Cabana in an address on the post-shuttle transition.

“An additional flight (or flights) have been proposed….(June 2011) mission next year, but funding for that has not yet been approved.”

Another key stage for STS-133 is the previous flight (STS-132) IFA (In Flight Anomaly) review, which will form a basis for STS-133’s Flight Readiness Reviews (FRRs). 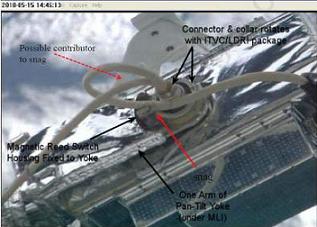 Most of the issues will already be known – such as the issue with the Orbiter Boom Sensor System (OBSS) camera wire which obstructed the sensor package during Flight Day 2 inspections, although one currently unspecified issue has gained some level of attention.

“Mission Operations (NASA/JSC) Held the STS-132 Post-flight Review last week and have a few items interest; no IFAs. Did have one ‘iffy’, which is their equivalent of IFAs on the ISS side,” noted the latest Shuttle Standup/Integration report (L2).

As expected, the vast majority of recent flights have enjoyed a relatively low count on the IFA review, and this mission is assured to lack any items of interest from a launch ascent standpoint, via the condition of Discovery post-landing, currently classed as one of the cleanest orbiters in the history of the program – aided by a very clean ET via on orbit photography.

The STS-132 IFA Review will take place on Thursday as part of the Program Requirements Control Board (PRCB) meeting.