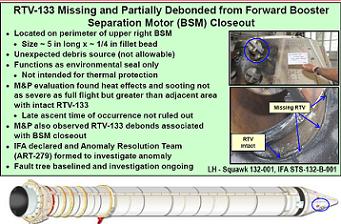 As the era of large Solid Rocket Boosters (SRBs) for NASA launch vehicles appears to be drawing to a close, the performance of STS-132’s booster set was recorded as excellent at the In Flight Anomaly Review (IFA). In total, zero IFAs were recorded on the Reusable Solid Rocket Motors (RSRMs) – with only four minor squawks, adding to the nine minor squawks and one IFAs on the SRBs.

While Shuttle Derived Heavy Lift Launch Vehicle (SD HLV) options utilize the boosters that were set to live on via Ares I and Ares V, the need for “game changing” propulsion technologies has seen the solid’s stock weaken – with a potential drive towards all-liquid hydrocarbon vehicles.

Technically Ares lives on, with the US Congress holding the keys to approving the FY2011 proposal, which would result in the official cancellation of the Constellation Program – and while there will be at least two more shuttle missions, another solid will fire into life in Utah later this year, via the second firing of the five segment motor, known as DM-2.

Discussions are still taking place on adding one or two shuttle missions to the manifest, with the boosters for STS-335 (Launch On Need support for STS-134) already on site at KSC, potentially changing call signs to STS-135. However, as it stands, STS-134 will mark the final scheduled flight of the shuttle SRBs, when they will be tasked with aiding Endeavour’s two minute first stage ascent early next year.

Post flight IFA reviews are a key milestone for both the concluded mission, and the next scheduled flight – as their data provides the baseline for the Flight Readiness Reviews (FRRs). STS-133’s FRRs will enjoy smooth sailing from the standpoint of the SRBs, which performed admirably during Atlantis’ launch.

Only one IFA was recorded via the SRB IFA review – all 16 STS-132 IFA presentations available on L2 – relating to missing insulation from Forward Booster Separation Motor (BSM) Closeout – which is classed as an unacceptable debris hazard.

“RTV-133 Missing and Partially Debonded from Forward Booster Separation Motor (BSM) Closeout: Located on perimeter of upper right BSM – Size ~ 5 in long x ~ 1/4 in fillet bead. Unexpected debris source (not allowable),” noted the presentation, which added the loss of the insulation during ascent held no issue for the booster’s performance.

“Functions as environmental seal only. Not intended for thermal protection evaluation found heat effects and sooting not as severe as full flight but greater than adjacent area with intact RTV-133.”

Although its location is an unacceptable debris hazard, it is not clear if the material had enough mass to be a threat to the orbiter’s Thermal Protection System (TPS). However, no impact with the orbiter was noted, although an investigation is still ongoing as to the root cause of the liberation. 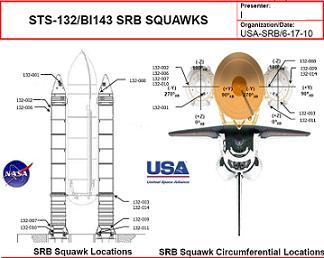 Squawks are minor issues which fail to be upgraded into a full IFA, with STS-132’s boosters listing nine – a low number – such items of interest in the review. 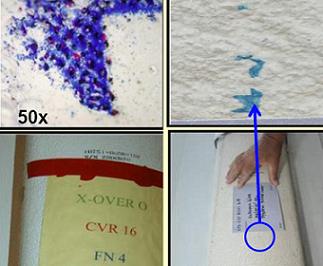 Squawk 132-002 provided a good example as to just how extensive the boosters are evaluated, even – in this case – before they launch, whist also showing how minor a squawk can be, with the blue material found to be nothing more than printer ink.

The performance of STS-132’s RSRM set 111 was classed as within specifications and overall ‘excellent’, although their inspection process takes slightly longer, and involves evaluations once the motors have returned to ATK’s base in Utah. So far, no IFAs have been declared, as engineers push forward towards their +180 days report. 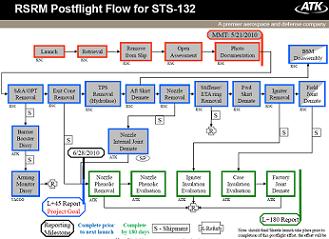 “All RSRM countdown parameters were within LCC (Launch Commit Criteria/OMRS limits and within family,” opened the ATK presentation to the STS-132 IFA review (L2). “Overall performance of both RSRM motors and all ATK BSMs excellent and well within requirements.

Only four squawks – two related to the same issue – were written, all of which have been reviewed and classed as no impact to the performance of the hardware.

“Overall performance of both STS-132 (RSRM-111) motors and ATK BSMs were excellent. Postflight evaluation is still in work. Four squawks have been written at this time. No IFAs declared at this time but additional postflight disassembly and evaluations are still in work,” added the introduction. 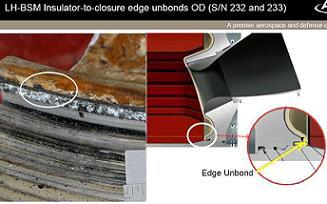 Two of the squawks were charged against the Left Hand (LH) Booster Separation Motor (BSM), relating to insulator-to-closure edge unbonds on serial numbers 232 and 233. Due to the lack of debris or motor performance concerns, this issue was not elevated to become an IFA.

The issue is also classed as likely to have occurred during splashdown in the Atlantic ocean, as opposed to during any phase of the powered ascent of first stage flight. 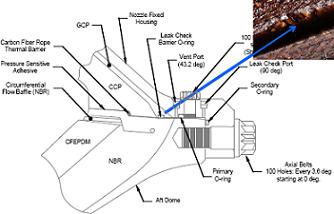 The third issue related to the Right Hand (RH) Nozzle Leak Check Barrier O-ring Groove on the Aft Edge Corner – which suffered from phenolic damage. No compromise to joint performance was noted.

“A small area of damage to the RH nozzle-to-case leak check barrier O-ring groove aft corner was observed at 308 degrees,” noted the presentation, which added the cause is still being investigated. 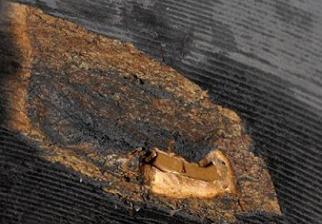 The final note on the IFA presentation referenced a blister on the insulation associated with the Right Hand Igniter Chamber. The blister was noted as a manufacturing defect with no impact to igniter performance.

“Unusually shaped feature (roughly 0.5” by 2”) was noted on the ID of the RH igniter chamber. Squawk was written to permit evaluation,” the presentation continued.

“A portion was excised which verified the observation was a blister and had no signs of thermal effects or sooting. Engineering allows blisters of this size in this region of the igniter.”

As with the orbiter and External Tank (ET) IFA reviews, the performance of the shuttle hardware has been highly impressive over recent years, at the very least ensuring the Space Shuttle Program (SSP) goes out on a high, or potentially vindicating the faith of lawmakers – should they approve funding to allow the program to continue through as far as 2012.

Proof the shuttle’s recent performance has been recognized by the engineering and political communities can also be seen via such extension debates, which now focus mainly on cost, as opposed to safety concerns.