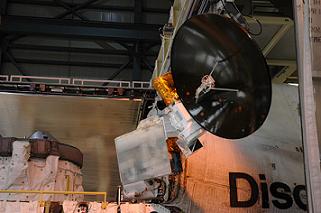 After it was revealed that several replacement S-Band antenna cables were found to be  “too short”, Discovery’s engineers have opted to install an alternative type of cable. The flexible alternative was used to mitigate the issues surrounding the routing of the long cable through the tight pathways of Discovery’s middeck, which proved to be problemative with the original semi-rigid cables.

No time is being lost in Discovery’s STS-133 flow, as processing is continuing unhindered. The orbiter still has around a month and a half of time remaining in her Orbiter Processing Facility (OPF-3) until she’s due to rollover to the Vehicle Assembly Building (VAB) for mating.

Integrated hydraulic testing was completed by the end of last week, while midbody “p-frame” installation and TPS (Thermal Protection System) work was conducted over the weekend.

An Interim Problem Report (IPR) was charged to the STS-133 flow during recent OMS (Orbital Maneuvering System) work, relating to a failed vacuum leak check. However, the procedure was completed due to a known effect in the system that can relate to the leak rates.

“New IPR 0032 to COOS (Call sign of Fuel Systems Engineers): During oxidizer cross feed line eduction, the vacuum leak check failed. COOS stated there is a known leakage in with the OMS cross-feed lines that can affect the vacuum leak rate,” added the NTD report. “A dev was written to delete the step, and the line eduction was completed.”

Two further IPRs – one related to Discovery’s brake pressure on her right outboard Main Landing Gear (MLG), and another on her KU-band system – require further troubleshooting.

“New IPR 0033: During data review, right outboard brake pressure No. 2 was found to be off-scale high (2000 PSIA). Troubleshooting plan is to inspect and de-pin terminal board on Right Outboard MLG, then inject signal and verify proper response.

“New IPR 0034: Picked up during Orbiter KU-band DTV testing. Comm and Tracking could not get a signal lock. This is a constraint to continuing. Engineering troubleshooting is in work.”

This issue is not believed to be related to the primary problem suffered Discovery during her STS-131 Ku-Band troubles, which resulted in the loss of the Ku-Band communications high speed uplink and downlink capability. That issue has already been resolved via troubleshooting upon her return to the OPF.

The root cause of the issue was tracked back to a fault with the Deployed Assembly (DA) unit, which has since been removed and replaced.

Although it was only classed as a minor issue, engineers have all-but resolved IPR-5 – related to S-band troubleshooting (May 7) – called for after erratic readings were observed during STS-131. 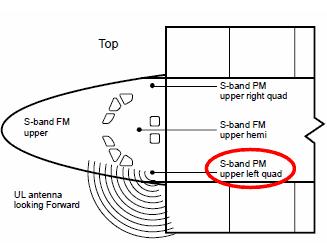 With the engineering resolution centering around the replacement of a coax cable in the middeck, several spares were found to be too short – likely based around the challenges of routing a semi-rigid cable in what is a complex routing pattern in the orbiter.

All the S-band RF units are located in Avionics bay 3A which is at the right-hand rear of the middeck. With the antenna located on the upper left side of the forward fuselage – close to the payload bay cabin bulkhead – the total length of the cable is relatively long.

“Determined that replacing the coax cable with a flexible coax was selected as the best option. There are three similar length flexible coax in existing stock.” noted the updated processing reports. “A fit check was performed on Friday and found the best fit would be a 30” flexible coax cable.

“The installation will be very straight forward by using an existing coax clamp that has room for one more coax and is attached to the wire tray. Installation of the coax is planned for Tuesday, with retest on Wednesday.”

As of Wednesday, the NTD confirmed the new cable was in place, and was undergoing the associated WLAN retest – (Thursday UPDATE) – which was successfully completed.

Meanwhile, the repair work on a Fairing Support Plate on the mated External Tank (ET-137) and Solid Rocket Boosters (SRBs) is proceeding in High Bay 3 (HB-3) of the Vehicle Assembly Building (VAB).

“Damaged SLA On EB-2 Fairing Support Plate: Hand pack cure and trim, and final acceptance are complete. Issue 2, (outboard SLA ear application on EB-2 is cracked full width across the closeout s/b no cracks). Removal of discrepant SLA, measurements and photo’s are complete,” added the NTD – (Thursday UPDATE) with the forward plan to carry out the repair on the second area.