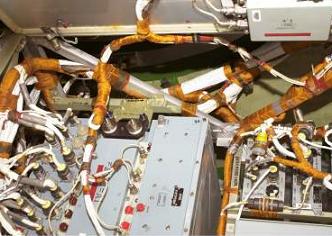 The Russian Progress resupply vehicle – M-06M/38P – has succcessfully docked with the International Space Station (ISS) at 16:17pm GMT on Sunday, following an aborted attempt on Friday. Caused by interference between the Progress TV transmitter and the TORU (Telerobotically Operated Rendezvous Unit) system, Progress suffered no issues during the second attempt.

With the expected loss of the massive upmass capability provided by the Space Shuttle via 2011’s retirement, and an ISS extension to at least 2020, problems with the Progress fleet would be a serious blow to providing the required supplies to enable of crew of six to be sustained on the orbital outpost.

While SpaceX’s Dragon and Orbital’s Cygnus vehicles are set to join the resupply fleet in a few years via the Commercial Resupply Services (CRS) contract, each resupply vehicle is only capable of a small fraction of upmass compared to the orbiters.

For the interim, four more Progress launches are scheduled to head to the ISS over the next 11 months.

ISS program managers at NASA and Roscosmos met this weekend to determine the cause of Progress’ aborted docking, reviewing real time data – some of which was revealed via memos outlining the issue on Friday.

“During 38P approach, Kurs acquisition was unsuccessful. (ТОРУ – TORU) activation was also unsuccessful on the first attempt,” wrote one NASA manager in a status update (L2) to his team. “Based on crew reports, 38P is somewhere between 600m and 2 km away and moving away from the ISS. The crew is going to rerun the (ТОРУ) procedure and MCC-M (Moscow) is assessing the situation.”

The autonomous approach procedure starts at the range of less than 400 km in the automatic mode by means of Kurs radar rendezvous system, according to the 258 page SoyCOM manual (L2). When the range of 150 meter is reached the spacecraft transfers to the station keeping mode while over the ground tracking/communication sites.

At this range the berthing (final approach) procedure is started and monitored by the Mission Control Center via telemetry data, TV and crew reports.

Friday’s aborted docking was due a “cancel dynamic operations” command that instructed Progress’ computers to fly the vehicle past the station on its final approach for docking, as it is intended to do if the internal guidance system receives conflicting commands or commands that do not comply with its pre-programmed commands.

Progress was under control at all times, and there was no threat of the vehicle colliding with the ISS.

“Based on preliminary information received from US personnel in MCC-M, they do have command capability to 38P. They were also able to determine that a command was issued to ‘terminate dynamic mode’ which aborted the automatic rendezvous,” added another memo (L2).

“They do not understand why this command was issued and will be investigating. Another docking attempt will likely not occur for another 48 hours pending their investigation but the on-console team is waiting official word before incorporating another attempt into the plans.”

At the time of the abort, the Progress was below the orbital outpost on a passively-safe trajectory, as is designed in the event of such a contingency.

“The automated rendezvous began at GMT 183/14:35:16. Progress Kurs-A and SM Kurs-P systems passed all self-tests and functioned nominally until the time of abort. The automated rendezvous was aborted between the Impulse 4 and Impulse 5 burns, at approximately 16:24; preliminary indications are that the ‘cancel dynamic operations’ command was unexpectedly issued, and the source of this command is under investigation,” added a third status memo (L2).

“There were three other anomalous signatures in the same timeframe, though their relation has not yet been determined: 1) the Progress Display+TV view was unstable on both ISS and the ground. 2) SM Kurs-P signal acquisition was lost and not regained. 3) the ISS crew was unable to establish a TORU link with the Progress

“The abort was not an abort burn, but simply deactivation of the Progress Motion Control System. At that time the Progress was below the ISS on a (designed) passively-safe trajectory. Another test of the Progress TORU system was performed by MCC-M on Orbit 35.” 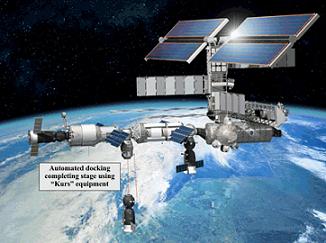 With the Progress at a safe distance away from the ISS, managers decided the second docking attempt would be made without the use of the TORU – following confirmation of the issue that caused the abort.

“The decision was made to proceed with docking, with the modification that TORU will remain deactivated to prevent recurrence of the anomaly, even in case of an automated system failure. The planned docking time is GMT 185/16:17.”

Progress conducted two successful firings of its engines Friday night to put the craft in a parking orbit around 300 kilometers from the space station. Another engine firing was conducted Saturday morning to start the process of returning the spacecraft back to the station for Sunday’s docking attempt.