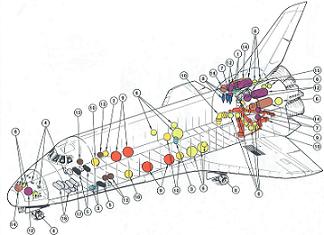 Since the Return to Flight timeframe, concerns regarding the state of the Composite Overwrapped Pressure Vessels (COPVs) on the orbiter fleet have led to restrictions in terms of ground processing to ensure the protection of the hardware and the workforce. However, recent testing of the COPVs has resulted in a request from the SSP (Space Shuttle Program) to re-examine these restrictions to determine if one of the restrictions could be eliminated for the final two currently scheduled flights.

According to a PRCB (Program Requirements Control Board) presentation dated March 4, 2010 and available for download on L2, the SSP has put forth a request to “Re-examine restrictions in place for Composite Overwrapped Pressure Vessel (COPV) hazards, including ground hazards and OMS offload, to determine if any of them can be relaxed in light of the recent Orbiter COPV testing.”

The request, generated at the Flight Readiness Review (FRR) for STS-130 back in January 2010, was aimed at providing updated information on the following four areas: “reliability calculations for changes in the OMS (Orbital Maneuvering System) loading with respect to the current Shuttle Manifest, PRA score in comparison to top risk scores, performance benefits of full load, and Ground Operations acceptance and recommendation to retain safety clears.”

In all, the recent COPV safety procedures were put into place after concerns were raised regarding the health of the COPVs over the predicted remaining lifetime of the Shuttle Orbiter fleet.

In all, an investigation of the COPVs during the Return to Flight time period resulted in two COPVs on Atlantis being deemed “high risk.” Those two COPVs were subsequently replaced (OV-104 MPS tank S/N 006 and 007).

As a result of the initial investigation, several new safety regulations were placed into effect to ensure that proper care was given to the COPVs to “mitigate risk of a COPV failure.”

These safety regulations included an OMS offload to reduce the stress loads on the Helium COPVs, a two stage loading process that resulted in reduced loading temperatures, a reduced pad-stay time at load (COPVs are now loaded 4-days prior to launch instead of the previous 12-days prior to launch load timeline), and restricted Pad access to essential personnel only after COPV pressurization.

As such, an “accepted risk” was determined and accepted by the SSP in October 2007.

At the time of STS-130’s FRR, the accepted risk was based on a COPV reliability model that was developed based on tank stress ratios and accumulated and predicted effective time.

The COPV risk was further established as a function of the “total life of Program reliability” – which is the accumulated risk for the three Orbiter vehicles. 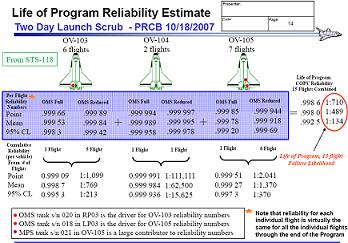 To verify the reliability numbers from the accepted risk determination, a four phase Accelerated Stress Rupture Test was performed on COPV tank S/N 007 – one the “high risk” tanks removed from Atlantis.

For Phase I, the test was conducted at flight pressure – 4850 psi – aged at 130°F to 38,000 total effective hours. At this stage, the reliability model predicted a 50% chance of COPV failure. The tank passed the test with no issues.

Phase II was conducted at flight pressure, aged at 160°F to 87,000 total effective hours. At this rate, the reliability model predicted a 95% chance of COPV tank failure. Again, the tank performed without issue.

Phase III included an increase in operational pressure to 5200 psi (above flight pressure limits) aged at 160°F to 113,000 total effective hours. Here, the model predicted a 99% chance of tank failure. Once again the tank performed with no issues. 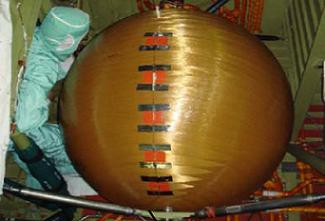 As such, “The successful completion of the Accelerated Stress Rupture Test (of Serial Number 007) provides additional model confidence,” notes the PRCB presentation.

“The Reliability Model developed for STS-118 and subs has not been updated to account for the test results. Because the model was shown to have significant conservatism, the impact of the test result to the reliability calculations would show an Enhancement of Safety.”

However, validation of the model cannot be accomplished with only one test (i.e. a single data point). The presentation notes that under ideal circumstances a total of 30 COPV tanks would have been tested to create a more sound and diverse data bed.

“Instead, we have one test result for flight justification of 70 Orbiter Tanks,” notes the PRCB presentation. “Was our ‘worst flight tank’ SN-007 the ‘energizer bunny of vessels’ or a ‘demonstration of overstatement of risk’? Is it possible that a tank vessel survived 85 times prediction? Is it possible that Analysis Team is off by 20% on Stress Ratio?”

This led to the questioning of how the Orbiter Stress Ratio Model was established. In all, the stress ratio is a combination of two factors: Volume growth during tank manufacturing (known as the autofrettage process) and Tank Burst Pressure.

This would seem to point to a “highly variable anomalous feature in an OMS vessel” with the 40-inch tanks operating between 4-7% above their design limits and the MPS 26-inch vessels operating at 36% above design limits.

Therefore, the question was then asked: “What did Orbiter Accelerated Stress Rupture Demonstrate?”

This Accelerated Stress Rupture therefore provides the best model confirmation given that no validation is possible.

Proposed Change to the COPV Risk Mitigation Plan for STS-133 and STS-134:

Based on the previously implemented COPV risk mitigation plan, all pad flows toward launch of the Space Shuttle vehicle involve the offload of OMS propellant and helium to negate a “full load” OMS prop launch.

This offload, approved by the OPO (Orbiter Project Office) has since become the Program standard and is now referred to as the “Nominal Offload.”

However, based on the completion of COPV SN-007 Accelerated Stress Rupture testing and the desire to increase APM (Ascent Performance Margin) to maximize upmass on the final two scheduled flights on the Shuttle manifest, a request has been put forward to “quantify the delta risk” for removing the “Nominal Offload” from the final manifested flights (currently STS-133 and STS-134).

In essence, the request is asking engineers to examine the risk of launching Discovery (STS-133/ULF-5) and Endeavour (STS-134/ULF-6) with full OMS prop and He loads – a decision that could give each mission an increase to their APMs of between 65-90 lbs.

“Flight Design has indicated that increasing OMS prop to full capacity (~2,100 additional lbs) would increase the ascent performance margin by 65-90 lbs of performance.”

While at the time of this PRCB presentation the current flight order had not yet been realigned to reflect the delays to the AMS-02 (Alpha Magnetic Spectrometer -02) payload for STS-134, a presentation chart indicates that the Flight Operations & Integration (FO&I) office recommended a full OMS load for STS-133 as “Additional APM [would] allow more ISS cargo to orbit.”

At the time of this presentation’s creation, STS-133 was the final baselined and manifested flight on the Shuttle manifest, with STS-134/Endeavour still officially slated to fly prior to 133. As such, the presentation notes that FO&I had not yet made a firm determination on whether or not to recommend full OMS load for STS-134 as “Additional APM not currently required. Will reassess if payload complement drive the need.”

However, that decision could change now that STS-134 is the final manifested flight on the Shuttle launch schedule.

Additionally, it has been recommended to not perform a full OMS load on the LON (Launch On Need) STS-335 mission as that flight carries an APM of over 3,000 lbp (pounds performance) – therefore negating the need for additional APM.

Nonetheless, to conduct the risk study for STS-133 and STS-134, a comparison between the new calculations were compared to the baseline calculations for STS-118 and subs in accordance with an OPO decision.

“In October 2007, the OPO decided that all future COPV Reliability calculations would be compared to the same baseline (from STS-118 and flights beyond). The thinking was, as you continued to evaluate the manifest, the calculated flight risk would continue to decline” the closer to the end of the manifest the calculated risk was determined. Therefore, a “false sense of diminishing risk” could be created when the actual cumulative risk would not have changed. 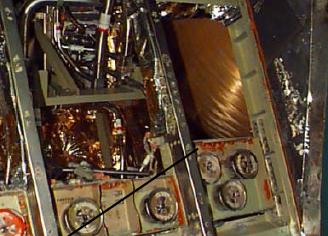 In all, however, the risk calculation team determined that the delta risk remained the same if one examined the risks for the final two flights alone or the entire STS-118 and subs manifest.

The presentation further notes that “this may not seem like much when averaged over two missions, but the change is important.”

For STS-133 the delta risk for launch with a full OMS load would be ~1:3100 per mission – meaning the chance of COPV failure is approximately 1 flight in every 3,100 missions.

This would place the COPV failure risk at #6 on the SPRA iteration 3.1 top risk contributors for STS-133 – behind (1) MMOD orbit strikes, (2) SSME-induced SSME catastrophic failure, (3) ascent debris strikes to TPS leading to LOCV on orbit or entry, (4) crew error during entry, and (5) RSRM-induced RSRM catastrophic failure.

For STS-134 – should a full OMS load be deemed necessary – the delta risk would be ~1:7700 and would therefore rank 14th on the SPRA iteration 3.1 top risk contributors.

Nevertheless, a determination on whether or not a full OMS load is required will be determined on a mission-by-mission basis based on the APM needs of the particular mission.

Should OMS full load be approved for STS-133 and possibly STS-134, current ground processing control and pad access restrictions would be maintained at their current status.