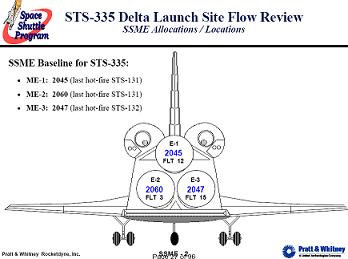 While the U.S Legislature continues to debate the immediate future of NASA and the possibility of flying the already planned contingency Launch On Need (LON) STS-335 mission as a full up mission to the ISS in its own right (STS-135), NASA has updated its ground processing master document for STS-335 as well as the overall parameters pertaining to all three orbiter’s Orbiter Modification Down Period (OMDP) time interval requirement.

Overall, Atlantis is expected to have ~95 hours of pad hold time, with the Hydrogen commodity being the limiting factor. Also, an update to the Ascent Performance Margin (AMP) now shows Atlantis carrying +5,502 lbs of AMP. 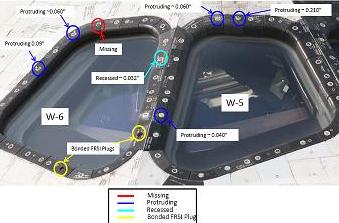 Furthermore, in addition to the standard turnaround processing for Orbiter Atlantis, one modification for OV-104 has been approved since the LSFR earlier this year. That modification relates to the Ceramic Plug/Insert Redesign.

“Redesigns ceramic plug sleeving/retainer for all 0.75” diameter plugs & 0.875” shorter diameter plugs (0.75” length and less) to increase cord thickness to meet the installation torque requirements – preventing plug from potentially backing out due to vibration loads during ascent,” notes the Delta LSFR.

This modification was approved June 4, 2010 at a Delta PRCB (Program Requirements Control Board) as part of a sweeping, fleet-wide alteration.

Aside from this modification, there is only one more potential modification for Atlantis this flow. This potential mod calls for the installation of TriDAR to Atlantis’ external Airlock truss in the Trajectory Control Sensor 1 (TCS 1) position. 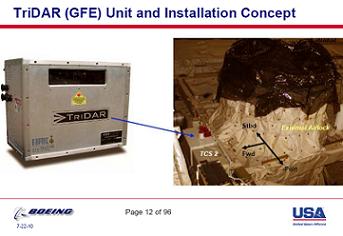 Since the TCS 1 is no longer flown, the location is already free for TriDAR installation.

Currently, only Discovery has TriDAR DTO (Detailed Test Objective) capability, having performed the TriDAR DTO on STS-128 and STS-131.

TriDAR, which his designed to demonstrate technology for autonomous rendezvous and docking in Low Earth Orbit, would be installed by Boeing tech orders.

A Change Request to protect for the possibility of flying TriDAR on STS-335 was approved on July 13, 2010.

However, one of the more interesting considerations for this particular OPF (Orbiter Processing Facility) flow for Atlantis are the numerous OMRS Limited Life/Time/Cycle & Interval Requirements that will come due before or shortly after Atlantis’ targeted launch on STS-335.

“Based upon a request at the STS-335 LSFR, a review of the OV-104 OMRS Limited Life/Time/Cycle & Interval Requirements thru January 21, 2012 was performed,” notes the Delta LSFR.

While a majority of items requiring work or inspection could either be accomplished within the extended flow for Atlantis (a flow of nearly 9½ months) or a waiver passed to defer work on a particular system/subsystem until after STS-335.

Nonetheless, the review showed that three (3) items could be potential “long poles due to significant impacts to the processing flow if implementation required.”

For the R&R of the Lower and Upper Hydrogen/Water Separator, the Delta LSFR notes that “NSLD is presently working spares to support the installation need date. Processing an OMRS exception will be considered if spares are unavailable.” 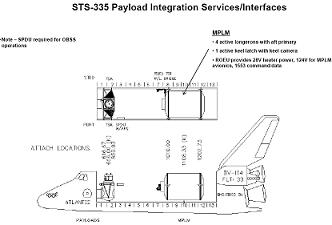 Given the STS-335 launch and mission schedule, this particular requirement is not in danger of lapsing prior to or during STS-335 and the mission would be completed long before the 6/24/2011 due date. However, 6/24/2011 is the working target launch date of the potential STS-135 mission – should Congress approve funding for the flight.

Furthermore, the R&R of all three APUs on Atlantis is currently based on a 6.5 year OMRS requirement. Nonetheless, the “potential for exception has been discussed based on the hardware being certified to 6 years 9 months.”

In addition to these three items, there are seven more OMRS exception/waivers pending for Atlantis toward her use on STS-335.

These include a Radiator Hinge Inspection that is due this flow (after flight 33) but has concurrence to extend the requirement until after flight 34, Wing Leading Edge Spar Structural Inspections (which are in work and will be competed less four panels prior to STS-335), Left RCS OXID GHe system A-leg secondary regulator lock-up high, and PRSD (Power Reactant Storage Distribution) O2 tank post-flight vac ion pump operation.

In addition to the above considerations is the fact that under the previous OMDP interval agreement in 2007 (5.5 years or 8 flights… whichever came first), Atlantis will come due for OMDP on January 21, 2011 based on the 5.5 year interval rule.

This meant that Atlantis was due for OMDP four months prior to her planned use on STS-335.

Likewise, Orbiter Discovery (OV-103) came due for OMDP after STS-131 based on the 8 flight rule – a rule that would have precluded her use on STS-133 (set for launch on November 1, 2010) without passage of engineering waivers and deferrals. 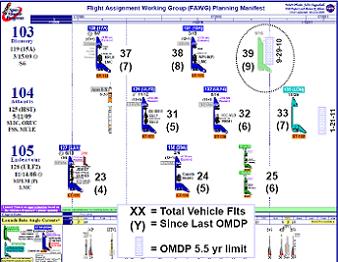 Under the pre-2007 OMDP time requirements (3 years or 8 flights, whichever came first) Discovery would have come due for OMDP in March 2008, Atlantis in July 2008, and Endeavour in July 2010.

Given the extensive amount of time needed to complete an OMDP (on the order of one calendar year) and investigation was conducted into the possibility of extending the OMDP time interval based on sound engineering data gained during the orbiter’s previous OMDPs.

However, after this OMDP extension was passed, the Shuttle manifest grew to include one additional mission – STS-134.  A subsequent flight order swap between STS-133 and STS-134 placed 134 ahead of 133 in the flight order and handed 134 to Endeavour and 133 to Discovery – her 9th post-OMDP flight and a violation of then-current OMDP time interval rules.

Subsequent flight delays to STS-134 pushed the STS-335 Crew Rescue flight by Orbiter Atlantis to April 2011 – four months beyond her OMDP due date of January 2011.

In all, the study was quite extensive – as all NASA engineering studies are – and a new recommendation was brought forth to the PRCB to extend the OMDP time interval from 5.5 years/8 flights to 6.5 years/9 flights.

Under the new rules, Discovery would be cleared (from an OMDP standpoint) to fly the STS-133 mission (as long as that mission occurs before September 29, 2011 – the new time limit for her OMDP requirement).

Likewise, Atlantis would now be clear from an OMDP standpoint to fly through January 2012.

Endeavour gains no mention in the extension presentation due to the fact that she was clear from the previous 5.5 year/8 flight OMDP time/flight requirement to fly through January 2013 — two years beyond the current end of the Shuttle Program.

However, the review and recommendation to the PRCB was not as cut and dry as simply extending the time and flight intervals between overhauls. An extensive investigation into all the OMDP activities and Orbiter systems had to be conducted to ensure that Discovery’s STS-133 mission and Atlantis’ STS-335 flight could be carried out safely from an Orbiter systems standpoint.

“In July 2009, a two-phased approach for reviewing all OMDP-coded requirements was approved by OPO (Orbiter Project Office) to allow for early identification and completion of non-extendable requirements over the last 2 flows,” notes the PRCB OMDP presentation.

Phase I of the review occurred over a two week period in which PRTs “leveraged previous OMDP extension study criteria and results to provide a ‘quick look’ color code disposition of each OMDP requirement based on a 9 flight / 6.5 year extension.”

The Phase I assessments were presented to the OPO in August/September 2009, at which time Ground Ops agreed to perform all 20 ‘red’ requirements on Discovery during her flow toward STS-131 in April 2010.

A rationale for each requirement was develop prior to the reviews by the individual PRTs and “documented in a standardized spreadsheet format with pre-defined criteria for evaluation.”

Each requirement was then presented by a system representative to the ERB with full PRT support via telecon. 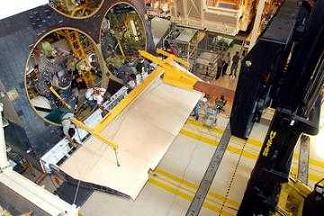 Rationale for OMRS V31 general zonal inspections (aka: “requirements not assigned to a specific subsystem”) was developed separately and was based on historical results. OMRS V31 zonal inspections include fluid, mechanical, electrical, and structural components.

As a result of these ERB reviews, one Phase I ‘green’ requirement and one Phase I ‘yellow’ requirement were changed to ‘red’ and were subsequently scheduled for completion by Ground Ops. Those two requirements were the Radiator-to-PLB fitting gap measurements and the PPO2 controller/valve functional checkouts.

All remaining ‘yellow’ requirements were reassessed to ‘green’ during the ERB meetings.

In addition, one non-OMDP time/cycle (8 flights) requirement was reviewed by the ERB. This was due to “significant impact to implement during nominal (non-OMDP) flow.”

This requirement pertained to the ECLSS waste tank removal for Nitric acid flush. Review of this requirement resulted in an approval to defer this task until after flight 9 of Discovery.

Furthermore, 2 OMPD requirements were found to be non-deferrable – one each  for Atlantis and Discovery: external airlock O2 ISO Valve Leak Check for Atlantis and HYD Series Retract Valves R&R for soft goods replacement for Discovery.

On February 11, 2010, the PRCB reviewed the OMDP interval extension proposal and officially approved the increase to 6.5 years/9 flights.