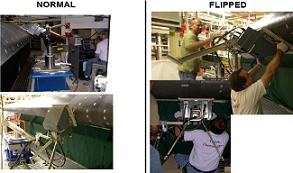 With Atlantis now over one month into her processing flow for the Launch On Need (LON) STS-335 rescue flight for the STS-134 mission, NASA and Shuttle managers have devised a forward plan to complete the mandatory Wing Leading Edge (WLE) Spar inspections on Atlantis – one of only a few mandatory safety inspections required for Atlantis before she can be cleared for flight next year.

As noted by a June 17 PRCB (Program Requirements Control Board) document on OV-104’s WLE Inspection Requirements (available for download on L2), completion of Atlantis’ WLE spar inspection is required prior to the next flight of the Orbiter.

In total, 11 of the 44 RCC (Reinforced Carbon-Carbon) panels on Atlantis’ WLE remain for inspection.

“Performance of these inspections is intrusive” and time consuming notes the presentation – requiring the removal of each WLE RCC panel and associated T-seals for underlying spar inspection followed by reinstallation of those RCC WLE panels and T-seals.

This process of inspecting Atlantis’ WLE spars is part of a multi-year process that began during OV-104’s second OPF flow toward the flagship STS-125/HST SM-4 mission.

As has always been the case with WLE spar inspections, the purpose of the required procedure is to “validate the health of the spar for all structural conditions, not just corrosion.” This includes inspections for “systematic primer breakdown, discrete corrosion, fastener anomalies, and other structural anomalies.”

Likewise, 12 panels were removed during OV-104 processing for STS-129. For this flow, panels L12-16 and R10-16 were removed with no active corrosion or structural defects identified.

Finally, during Atlantis’ flow for STS-132 a further nine (9) panels were removed, panels R1-9. During these inspections, only “minor inactive corrosion” was found behind one panel.

Thus, 33 out of Atlantis’ 44 RCC WLE panels have been removed for spar inspections, with 31 of the total 46 spars inspected as of Atlantis’ OPF rollout for STS-132.

Due to Atlantis’ scheduled flows for STS-125, STS-129, and STS-132, completion of WLE spar inspections behind all 44 RCC panels was not possible from a time/schedule standpoint.

However, the corresponding results of the inspections as of the STS-132 OPF flow, which revealed the inspected spars to be in good health with minimal to no corrosion present, allowed SSP managers and the all-powerful PRCB to approve deferral of inspection of the remaining spars until after Atlantis’ STS-132 OPF flow – an approval that came with the mandate to finish the spar inspection prior to Atlantis’ next flight.

This decision approving a one (1) flight deferral for the remaining WLE spar inspections was aided by the visual/borescope inspections performed behind panels L8-10 which identified no areas of active corrosion.

Therefore, during Atlantis’ flow toward STS-335, RCC WLE panels L1-11 will be removed to support the completion of WLE spar inspections.

Overall, the WLE spar inspections to date have yielded less corrosion than expected. 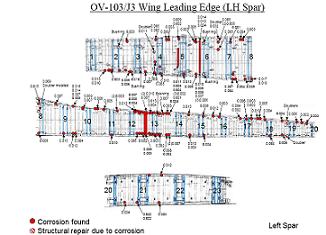 “OV-104’s WLE spars are less corroded than expected based on age and fleet experience. Moderate corrosion was expected,” notes the presentation.

Further, no indication has been found to suggest that the “primer has lost ability to inhibit corrosion formation or growth.”

With 31 of the 46 spars inspected to date, confidence is high (between 65%-75%) that the uninspected spars will show conditions similar to those already inspected.

Nonetheless, the presentation notes that the possibility exists for “undetected corrosion [that is] sufficient to reduce margins of safety below certification requirements.” 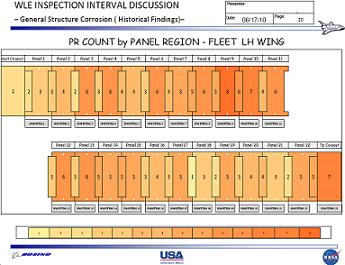 In fact, through these routine inspections of the Orbiter fleet’s WLE spars, the likelihood of a Loss of Vehicle (LOV) event because of a loss of structural integrity is maintained in the so-called “green” zone known as “Improbable Catastrophic” in the overall risk matrix.

As such, a risk hazard assessment was performed to determine the risk associated to OV-104 for STS-335 in the event of non-completion of the WLE spar inspections.

Also adding to the desire to complete all spar inspections before Atlantis’ next flight is the fact that more than 50% of the defects found during her last spar inspection in 2003 are located in the region that has yet to be inspected.

Moreover, the presentation notes that a “lack of spar refurbishment on OV-104 can mask smaller corrosion defects.” Both OV-103’s (Discovery) and OV-105’s (Endeavour) spars showed a “significant quantity of flaws after stripping.”

While there were no obvious “look here first” areas of structural defects noted on the WLE spars during the current round of inspections, defect depths of only 0.013-inches hold the potential to significantly decrease structural margin at the WLE and RCC attach points. During OV-104’s last spar inspection, defect depths up to 0.031-inches were documented.

Since the possibility for “non-corrosion abnormalities in the uninspected areas” exists, the previous rationale to defer WLE spar inspections “weakens over time [as the] risk continues to increase between last inspection and potential future flight.”

In all, this translates to an increase in the risk matrix from “Improbable Catastrophic” to “Remote Catastrophic” for a structural failure leading to a LOV situation, thus moving the risk from the “green” to the “yellow” — a risk increase that would require the acceptance of the Program SIB.

Therefore the Orbiter Project Office has stated a desire to “buy down” this risk by completing all WLE spar inspections prior to flying Atlantis again.