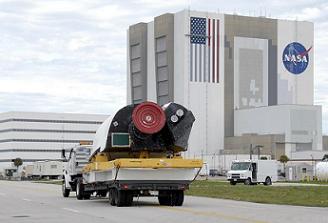 Discovery is in great shape to make her recently slipped launch date target of November 1, with the hiccup relating to her number 1 Main Engine (ME-1) now a thing of the past, following a successful checkout of the re-installed Space Shuttle Main Engines (SSMEs).

Engineers are now happy with the Low Pressure Oxidizer Turbo Pump (LPOTP) torque checks, following issues with ME-1 – which resulted in all three engines being removed, ahead of work to replace the turbo pump. The heat shields that surround the base of the three engines are now in the process of being installed.

No new Interim Processing Reports (IPRs) have been added of late, although an update to one of the first issues noted after returning from STS-131 (IPR 0005) – relating to the erratic measurements on the upper left antenna – will require further troubleshooting, after thermography on suspect connectors showed no anomalies.

Three inverters – used to convert the DC power generated by the fuel cells into AC power for use by a number of orbiter systems – were also successfully removed and replaced over the weekend, after they were initially charged as IPR 0001, due to the problem observed with a voltage increase on the H2 Pump Motor Condition on Fuel Cell 2 during STS-131.

“Inverters 4, 5, and 6 removal and replacement was worked Saturday and continued Monday,” added the NTD report, before updating with: “Inverter replacement was completed by (end of Monday).”

Thanks to confidence in the downstream regulators on the system, the Flight Readiness Review (FRR) cleared Discovery to launch, as opposed to rolling back to the Vehicle Assembly Building (VAB) for demating, and a subsequent rollback to her OPF for the Right OMS Pod to be removed.

Instead, managers deferred the work to her post STS-131 flow, with the Pod – which contains the RRCS valves – demated and sent to the HMF a month ago, where the faulty valve was removed and sent for evaluations into the root cause of its pad flow problems.

Sporting a new valve, the Right OMS was returned to OPF-3 on the back of a flatbed truck, arriving in the OPF early on Tuesday morning. “Installation pre-ops” began on Monday, which will allow for the Pod to be re-installed on to Discovery’s aft on Thursday.

Over in High Bay 3 (HB-3) of the VAB, the mated Solid Rocket Boosters (SRBs) and ET (ET-137) continue to undergo closeout work, while technicians prepare to carry out repair work on a foam chip on the Aft Fairing closeout.

Endeavour’s flow is even more relaxed, with her STS-134 mission not scheduled to launch before February. Current processing work is centered on preparing her Payload Bay (PLB) for the arrival of the AMS payload and checking the landing gear functions.

“Payload pre-mate testing began Monday and will complete (late Tuesday). Landing gear functional (was conducted on Tuesday),” noted the NTD report, which had previously noted an issue with the Ground Support Equipment (GSE) during the checks on Endeavour’s Ammonia Boiler System (ABS).

“The ABS fill, sample and QD (Quick Disconnect) leak checks were scheduled for Monday. However, last Friday, the GSE panel used to support filling and sampling experienced a number of small leaks. Picked up GSE IPR, disconnected the NH3 tank and depressurized the system, and performed troubleshooting. The operation will resume following GSE repair.” 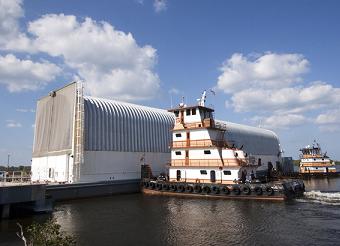 Meanwhile, the final “new” tank to have been produced at the Michoud Assembly Facility (MAF) in New Orleans, has arrived at KSC.

ET-138 was given a ceremonial send off by the MAF engineers last week – most of whom were wearing the aptly titled “Finish Strong” t-shirts – prior to its arrival on the Pegasus barge.

Towed by the Freedom Star into the VAB Turn Basin late on Tuesday, the tank will be offloaded on Wednesday and transported into a checkout cell inside the VAB.

ET-122 will be the next tank to be shipped from MAF, for its role with Atlantis for what is currently the Launch On Need (LON) role in support of STS-134, known as STS-335.

However, that mission may yet change call signs into STS-135, should approval to fly the mission to the International Space Station (ISS) receive approval next month.