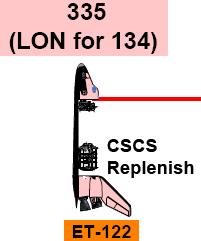 Managers will meet on Monday to outline mission capabilities and content for STS-135 – pending the approval of the additional flight next month. The Integrated Product Team (IPT) will discuss additions to Atlantis’ payload, such as Orbital Replacement Units (ORUs) or even technology demonstration payloads, in addition to Multi-Purpose Logistics Module (MPLM).

Atlantis continues to enjoy a smooth processing flow, following her return into the Orbiter Processing Facility (OPF-2) at the conclusion of STS-132. Regardless of the upcoming decision on whether or not to hand her one more mission with STS-135, Atlantis is being processed for flight as part of preparations for her STS-335 LON (Launch On Need) role in support of STS-134.

The upcoming milestone of SSME (Space Shuttle Main Engine) removal undergoing preparation, which will result in the three engines being removed next week.

The Solid Rocket Boosters (SRBs) which have been allocated to STS-335 – and will become part of STS-135 in the event of the LON mission being upgraded to a scheduled flight – are currently being inspected inside the Rotation Processing and Surge Facility (RPSF), while External Tank (ET-122) is closing in on final assembly in New Orleans.

“ET-122 All hands are working on this tank. Longeron closeouts continue; this is the critical path for getting out of Final Assembly. Bipod fittings are now on. All fits are complete,” added the latest report from the Michoud Assembly Facility (MAF) – which saw the last ‘new’ tank – ET-138 for STS-134 – depart on its journey to KSC late this week.

“LO2 feedline fairings installed and the camera routings in work. The crew is inside the intertank doing all the mechanical and electrical routing. The LH2 aft manhole covers are installed. Making good critical path progress to the plan to mid-July to roll out of Final Assembly.”

All PRCB (Program Requirements Control Board) documentation to date has focused solely on Atlantis’ role for the STS-335 LON mission – which remains as the baselined role for the orbiter, per the Flight Definition and Requirements Directive (FDRD), which is the key body for baselining missions under the direction of NASA and the Space Shuttle Program (SSP).

However, on Monday, the IPT will meet and overview STS-135’s basic elements – by way of pre-empting a positive outcome in approving STS-135. The final decision will be made next month.

“An STS-335 IPT is scheduled for Monday July 12. As of now, the STS-335 mission is baselined in the FDRD as a launch-on-need (LON) rescue mission for STS-134/ULF6. The STS-335/LON mission would only be flown in the event the STS-134 vehicle/Endeavour was declared unsafe for entry,” opened notes for the IPT meeting, acquired by L2.

“There have been ongoing discussions within the agency over the last several months to consider making STS-335 a planned mission to the ISS; the mission would be designated STS-135.

“It was expected that the decision whether to fly STS-135 as a planned mission would be made by the end of June, however, the agency continues to evaluate the addition of STS-135 to the manifest and is now expected to make the decision in August.” 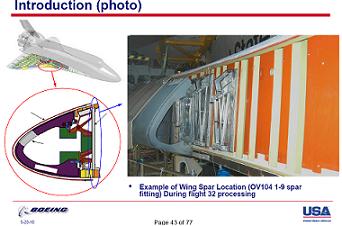 The IPT notes gave the first official-level overview of STS-135’s mission content that will be up for discussion next week, confirming the flight is currently being worked for Atlantis – despite some concerns over a number of predicted issues with part of her processing flow for flight, which had lead to some discussion on whether to hand the mission to Discovery.

It was also noted – as expected – that STS-135 would fly with a minimum of four crew, allowing for a dual-Soyuz LON plan to be utilized in the highly unlikely event Atlantis received damage to the level she would not be able to bring the crew home.

“Since there will not be a Shuttle LON rescue mission prepared in support of STS-135, the mission crew size will remain four. In the event Atlantis is declared unsafe for entry, the rescue of the four STS-135 crew members would be performed using Russian Soyuz vehicles.

“The exact agreement and timing for their return is still being negotiated between the partners. However, NASA has determined that the proposed rescue scenario using Russian assets is an acceptable solution for the rescue of the STS-135 crew.” 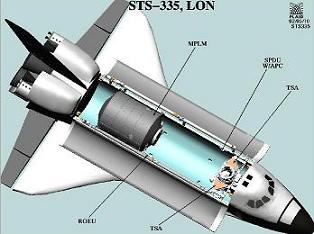 Also noted was a slight refinement to the notional launch date, slipping four days to June 28, 2011, for a 11+1+2 mission that is without any shuttle crew EVAs (due to crew size) – although alternative options are under consideration.

“The assumption for STS-135 flying only four Shuttle crew members is that there will be no planned EVAs. However, it is unclear whether an EVA could be planned using ISS crew members.”

In the event of STS-335 launching on a rescue mission to the ISS, baselining documentation showed Atlantis would carry a MPLM – mainly for the purpose of restocking the Station, following its hosting of the STS-134 crew prior to STS-335’s arrival. 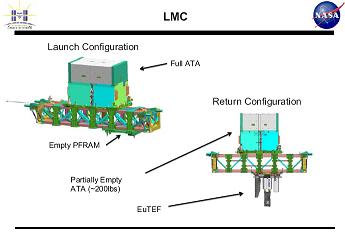 The MPLM remains as part of Atlantis’ payload for the notional STS-135 mission, per IPT notes, although confirmation that discussions earlier in the year – for the addition of a LMC (Lightweight Multi-Purpose Carrier) in the aft of the orbiter’s payload bay – is becoming part of the mission’s planning.

More interesting will be the forward plan on what types of payloads could ride uphill on the LMC, with the obvious opportunity to aid the ISS’ long-term future via ORUs, but also the potential to launch technology demonstration payloads.

“There have been discussions about further optimizing the mission by either adding or protecting for additional payloads, namely Goddard Space Flight Center technology demonstration payloads, or possibly ISS ORUs (if required) which could be integrated on a Lightweight Multi Purpose Experiment Support Structure (MPESS) Carrier (LMC) which would be installed in the cargo bay aft of the MPLM,” continued the notes.

“(EVA) capability needs to be evaluated/considered to determine whether adding payloads to an LMC which require EVA for removal is viable option. The possibility of using the Special Purpose Dexterous Manipulator (SPDM – Dextre) to remove FRAM (Flight Releasable Attachment Mechanism) based payloads from the LMC must also be understood.

“During the STS-335 Cargo Integration Review which was conducted early March, the decision was made to generate engineering products which protected for the late addition of an LMC to the flight. This decision has provided the Agency/Programs the flexibility to accommodate future payloads beyond the normal template date for adding payload.” 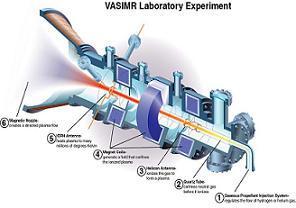 Those payloads will be decided over the coming weeks, likely as part of the approval decision – although the late June 2011 flight may allow for launching the Variable Specific Impulse Magnetoplasma Rocket (VASIMR) engine – providing it can support its original scheduled – which is questionable. VASIMR would be tested by aiding the ISS altitude control – such as reboosts.

The engine – otherwise know as an Electro-thermal Plasma Thruster or Electro-thermal Magnetoplasma engine – uses radio waves to ionize and to heat propellant and magnetic fields to accelerate the resulting plasma to generate thrust.

However, due to the power requirements at the ISS, the engine will only be put through minimal testing. Several other working assumptions are also pre-empted for the notional mission, which will undergo evaluation during Monday’s meeting.

Such assumptions include the need to move to a Flight Day 4 rendezvous and docking, Thermal Protection System (TPS) inspection timelines and the length of the docked phase to the mission.

“The purpose of the July 12 STS-335 Flight IPT is to determine the actual mission capabilities, based on current assumptions, and discuss possible changes and determine the feasibility to accommodate them,” continued the overview.

“The mission timeline for flying only four Shuttle crew members assumes rendezvous occurs on flight day (FD) 4 (vs. FD3). Due to the increased workload placed on a 4 vs. 7 member crew during the pre dock time frame, a FD4 rendezvous was determined to be required to protect shuttle crew scheduling constraints. 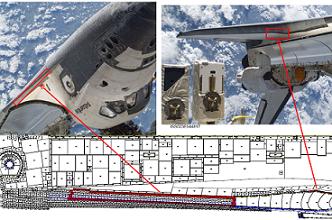 “The possibility of deferring some of the FD2 Orbiter TPS inspection until the post docked timeframe has been mentioned as a possible way to provide additional MPLM transfer time. (We) would like to better understand the risks and timeline trades to determine if this is indeed a viable solution for increasing the docked timeframe.

The IPT will then be able to to identify critical decision dates to ensure the Agency and related programs understand what options are still viable for the STS-135 mission, in the event of approval being gained.