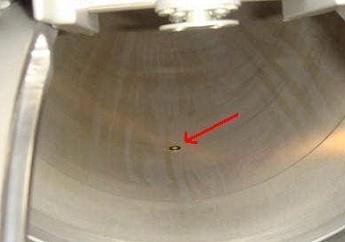 Discovery’s External Tank (ET-137), along with ET-138 and the yet-to-be-shipped ET-122 – currently set to fly with STS-335/135) – are to undergo X-ray inspections, following an investigation into a washer that was found inside ET-138’s LO2/LOX Feedline. The inspections a ‘due diligence’ contingency procedure that will refine the ability to detect out of place washers.

ET-138 is currently located in the Checkout Cell located in High Bay 2E (HB-2E) inside the Vehicle Assembly Building (VAB), following its arrival in Florida from the Michoud Assembly Facility (MAF) in New Orleans in mid-July. It is currently set to fly with Endeavour on STS-134.

It was during routine inspections on the LO2/LOX 17 inch feedline – which involves the removal of a cover plate to allow for inspections of the inner workings of the lines – that a washer was found, kicking off the subsequent Foreign Object Debris (FOD) investigation.

“On ET-138, removed the LOX 17” cover plate to perform angle and tip load measurements; a loose washer was found in the feedline. The washer was removed and sent to MAF for analysis,” opening notes revealed (L2).

“ET-138 (VAB HB-2E): A washer was found in the LO2 feed line during inspections and was removed. The washer has been sent and received at MAF for further engineering evaluations. Wipe samples were completed and routed to Wiltech for analysis.”

That analysis has since been completed, identifying the out-of-place hardware as flight washer, associated with the Ball Strut Tie Rod Assemblies (BSTRA)/Bellows on the feedline itself.

“ET-138 (VAB HB-2E): Lockheed Martin has identified the washer found last week. This type of washer is used in the assembly of seven flanges on the LOX Feedline. Since the washer is Cad plated, it is identified as a flight washer,” noted a NASA Test Director (NTD) update (L2).

“An ERB (Engineering Review Board) was conducted to understand Lockheed Martin’s findings. LM has asked KSC to go forward with an X-ray plan of five Bellows/BSTRA’s locations. Paper and schedule are in progress but not expected before week’s end.

“Noon board will discuss the LO2 feedline washer and the ‘go forward’ plan. X-ray inspections will be tracked through the original PR (Problem Report) used to document the found washer.”

With the ERB recommending X-rays for all three of the manifested External Tanks, the Noon Board meeting at the Johnson Space Center (JSC) noted priority will be placed on inspecting STS-133’s External Tank (ET-137), which is currently stacked in High Bay 3 (HB-3) of the VAB. 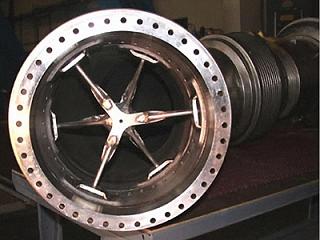 “Noon Board discussion gave verbal approval to perform X-Ray inspections of Five Bellows/BSTRA locations on the LOX Feedline for ET-137, ET-138 and ET-122. The priority now becomes ET-137,” added the NTD on Friday.

“MSFC (Marshall Space Flight Center) continues to perform the X-Ray validation on the detectability of washers. The areas of concern are the pads of the BSTRA legs and the light washers.”

The BSTRA structure is designed to allow two sections of feedline to be joined with a flexible bellows section, permitting a limited amount of bending at that joint. The two tripod shaped struts and a ball-bearing form a joint that can be pivoted about the ball, but resists axial offsets between the two halves.

Enough contingency time remains in the ET-137 flow, if the X-ray operations delay any processing milestones – which is unlikely. All ET/SRB mate operations appear to have been completed, with NTD status listing the tank as moving into orbiter mate preparations, ahead of the arrival of Discovery from her Orbiter Processing Facility (OPF) next month.

The only work being conducted on ET-138 at present is the PAL (protuberance air load) Ramp and J Box closeouts – which are about to be sprayed with a TPS (Thermal Protection System) coating.

ET-122, however, is deep in final processing for next month’s shipping to the Kennedy Space Center (KSC), with Lockheed Martin/MAF noting the tank is about to head into final shakedowns next week.

“ET (LMSS/MAF): ET-122 In Building 420, all the feedline yoke sprays are complete. Trims are complete, working a little (problem) there, but no real issue. Internal to the intertank, have the harness routing complete, inspections are in work and should be done (this week),” listed information on the latest Shuttle Standup/Integration report (L2).

“Shakedowns should start early next week. On schedule to get out of there in early September. Continue to work the external shakedowns on the intertank, the PAL ramp footprint sprays, and the repair sprays. The LH2 spray was completed Wednesday night.

“They are prepping for the bipod final closeout spray (this week). Handpacks and aft closeouts still continue. The NDE (Non Destructive Evaluation) is around 90 percent complete. Have a pre-ship review planned at MAF on September 8.”

It is likely the X-rays on this tank – which was manufactured prior to Return To Flight – will take place inside the VAB after the tank has arrived from New Orleans, in order to avoid disruptions to the shipping date – currently classed as mid-September.