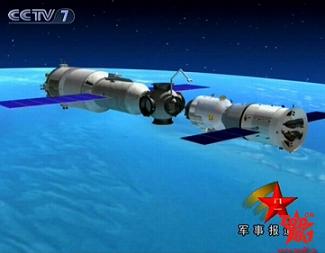 The launch of Tian Hui-1 has been pre-empted since the end of 2008, with indications that the development of Tian Hui-1 was merged with the Zi Yuan-3 project – planned for launch in 2011.

The Tian Hui-1 is equipped with a three-dimensional survey camera – along with and a CCD camera capable of a ground resolution of 5 meters and a spectral region of 0.51μm to 0.69μm, with a camera angle of 25 degrees.

The satellite was made by the DongFangHong company, which was established by the China Aerospace Science and Technology Corporation and the Chinese  Academy of Space Technology (CAST).

The CZ-2D Long March 2D launch vehicle is a two-stage rocket developed by the Shanghai Academy of Spaceflight Technology. With storable propellants, it is mainly used to launch a variety of low earth orbit satellites, launching a 3,500kg cargo in a 200 km circular orbit.

The vehicle’s first stage is the same of the CZ-4 Chang Zheng-4. The second stage is based on CZ-4 second stage with an improved equipment bay. The first launch of the CZ-2D was on August 9th, 1992 from the Jiuquan Satellite Launch Center orbiting the Fanhui Shei Weixing FSW-2-1 (22072 1992-051A) recoverable satellite.

It is also the location for all the Chinese manned missions. Presently, only the LA4 launch complex (with two launch pads – SLS-1 and SLS-2) is in use.

On June 15th, China launched the SJ-12 Shi Jian-12 (36596 2010-027A) satellite to carry out a scientific research and technological experiments. After a few days in orbit, and according to China Space Specialist Igor Lissov, the satellite made a series of orbital manoeuvres approaching the SJ-6F Shi Jian-6F (33409 2008-053B) satellite, launched on October 25th 2008.

This operation – which was not announced by the Chinese officials – was probably the first orbital inspection of a satellite to be carried out by the Chinese, with the closest approach took place on August 13. The purpose of this manoeuvre may be related to the manned space program – but it also gives the indication that China now has the capability to inspect satellites in Earth orbit.

China is gearing up towards the launch of the first Chinese space laboratory, TG-1 Tiangong-1. Recently Xinhua announced that China had finished construction of its first unmanned space module and that it was now testing the module’s electronic, mechanical and thermal properties.

The module will be launched early in 2011 by a modified CZ-2F Chang Zheng-2F launch vehicle.

Other missions in the pipeline include the launch of the Chang’e-2 lunar probe, which will start Phase II of China lunar exploration, orbiting the Moon at a 100 km altitude in order to collect data for the soft-landing of Chang’e-3.

China will also continue to upgrade its global positioning system with the launch of other BeiDou-2 satellites for the Compass system.