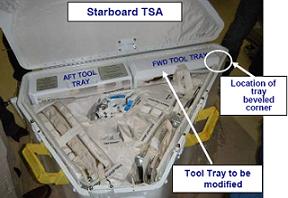 Despite a late call to install a Tool Stowage Assembly (TSA) – requiring the re-opening of Discovery’s Payload Bay Doors (PLBDs) – rollover remains on track for September 8. With several STS-133 milestones scheduled for September, Space Shuttle Manager (SSP) John Shannon rallied the troops into mirroring the hugely successful pace of 2009 and earlier this year.

Containing 30,000 mission patches – apparently to become flown souvenirs – the TSA will be installed over the weekend, delaying the previously scheduled checks into the orbiter’s weight and Center of Gravity (C.G) requirements into next week.

“Continue to make good progress towards rollout. Completed all the structural leak checks this week. Making preps to open the PLBDs. Have the strongbacks on, will open the doors (Friday),” noted KSC Ground Operations (L2).

“Will have the TSA installed Saturday, and then will close the doors on Sunday. That will get them in a posture to support the weight and C.G. activity. Still on track to support rollout on September 8.”

The NASA Test Director (NTD) confirmed the re-opening of the doors on Friday, with Flight Operations and Integration (FO&I) noting their appreciation and thanks for working the late task.

“The PLB doors will be opened today (Friday) to install a Lightweight Tool Stowage Assembly (LWTSA),” noted the NTD, with FO&I adding: “Thanks and appreciation to everyone helping with the installation of the TSA. Using two avionics bays to install some of the items, and have discovered a few missing.”

Discovery is behaving impeccably inside the OPF, with no new IPRs (Interim Problem Reports) being charged against her flow for some time now. She will be put to sleep (powered down) for the final time during a flight processing flow – given STS-133 is her final mission – on Monday.

Flight Operations and Integration have already completed their review for Discovery’s departure from her OPF, with the key Orbiter Mate and Rollout Review (ORMR) set to take place early on Wednesday morning. No constraints have been noted at this time. 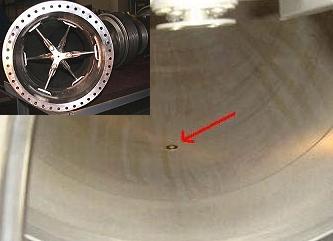 Over in the Vehicle Assembly Building (VAB), the mated ET-137 and Solid Rocket Boosters stack is in the correct configuration to receive Discovery on September 8, although work is being conducted via X-rays – called for after a flight washer was found in ET-138’s LOX/LO2 Feedline.

Engineers will continue the contingency X-rays into next week, as all three tanks – the latter being ET-122, which is currently undergoing final processing at the Michoud Assembly Facility (MAF) – are checked for the unlikely event of another washer of Foreign Object Debris (FOD) being found out of place. 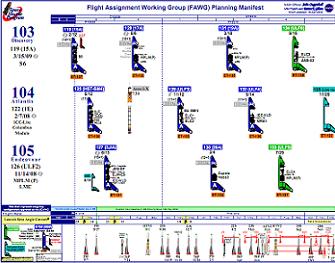 Meanwhile, Mr Shannon provided one of his regular rallying calls, asking the teams to mirror the successes seen via what was the fastest flight rate seen since the loss of Columbia – a run of eight missions between March 2009 and May 2010.

“Discovery will be rolled over into the VAB in less than two weeks. Summer is over. We had a lull after a very successful, very busy time last year,” noted Mr Shannon via notes in the latest Shuttle Standup/Integration report (L2).

“We have gotten to take a little bit of time to regroup, some retreats and discussions amongst the groups, but now we need to pick the urgency back up and start working off the different issues that are sitting in front of the Program.

“Mr. Shannon sees everyone doing this, and it is great. But, we need to really start to pick up the pace like we were last year, and get things resolved and get the vehicle ready to roll over to the VAB and ready to launch on November 1.”