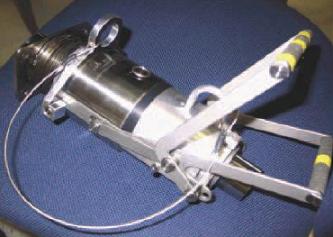 Following the eventful first Station EVA to remove and replace a failed ETCS (External Thermal Control System) Loop A PM (Pump Module), ISS crewmembers Tracy Caldwell-Dyson and Doug Wheelock once again ventured outside the ISS for the second of now three planned EVAs to bring the Station’s cooling system back to full operating capacity following the failure of the Loop A ammonia PM on July 31. The EVA was a big success.

On July 31 at ~20:00 EDT (00:00 GMT) the ETCS Loop A NH3 PM experienced a failure, effectively disabling half of the International Space Station’s critical cooling system.

The ETCS, which operates on two separate loops (Loop A and Loop B), contains one PM each.  The pumps are responsible for moving NH3 (ammonia) through the radiators, electrical boxes, and heat exchangers to facilitate the “dumping” of heat generated by the Station’s numerous systems and experiment racks.

When the Loop A NH3 PM failed on July 31st, the entire cooling system on the Loop A portion of the ETCS shut down due to an inability to move ammonia through the cooling lines.

As a result, station crewmembers, led by Caldwell-Dyson and Doug Wheelock began deactivation various station systems and experiments to prevent overheating. The crew installed jumpers to regain some cooling and data redundancy.

However, several systems (specifically experiments) are still shut down and cannot be reactivated until the Loop A PM has been replaced and full operational capability has been restored to Loop A of the ETCS.

According to NASA, a loss of science and scientific data has been an unfortunate but unavoidable result.

As is a natural part of all human endeavors, things don’t always go according to plan. Based on the original two EVA plan to R&R and the failed Loop A ammonia Pump Module, EVA-15 (the first EVA of the R&R effort) was supposed to remove the nonfunctional ETCA Loop A PM and begin work on the new pump currently stockpiled on the outside of the ISS.

According to NASA, “EVA-16, on 8/11 (Wednesday), is being extensively & thoroughly re-planned as a result of the disappointing outcome of EVA-15 which failed to get the nonfunctional ETCS Loop A PM out and start work on the new pump.”

Wheelock and Caldwell-Dyson were unable to complete all the planned procedures during the record breaking stage EVA (no shuttle at station) due to a “significant” leak at the M3 QD (Quick Disconnect) at the failed Loop A PM.

The leak was first noticed during the initial attempt to remove the M3 QD. Once the leak was noticed, a QD bail was cycled but failed to resolve the leak. Furthermore, after cycling the QD bail, the detent button was found to be jammed – the button would not depress despite several attempts to manually manipulate the button.

Wheelock and Caldwell-Dyson were then instructed to continue with the removal of the next two QDs – which were both removed without any issue or leakage.

Caldwell-Dyson and Wheelock then returned to the M3 QD and attempted to release the stuck detent with the use of a hammer. After a few taps, the detent was successfully depressed and “the crew proceeded with closing the QD,” NASA stated.

However, this procedure resulted in the leakage of approximately 3 lbs of ammonia to space from the QD. The leak was quickly isolated to the system side of the PM due to a decrease in system pressure.

Because the system configuration prevents the stoppage of a leak from the “female” side of the jumper, Caldwell-Dyson and Wheelock were instructed to reattach the QD and reopen the QD valve – a procedure which stopped the leak.

At 8 hours 3 minutes in duration, this was the longest Stage (without the Shuttle present) EVA in ISS history.

Nonetheless, the QD ammonia leak was not the only issue faced during Wednesday’s EVA (EVA-15). A malfunctioning CO2 (Carbon Dioxide) sensor in Doug Wheelock’s EMU (Extravehicular Mobility Unit) also cropped up during the spacewalk. 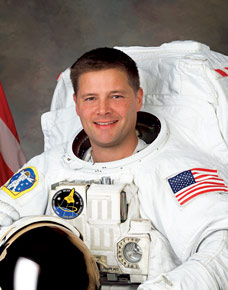 As of Monday, “The CO2 sensor which failed in Wheels’ suit [had] not yet been recovered.” Steps to recover the sensor were still being discussed/implemented. One of these procedures included airing out the spacesuit by leaving it exposed to the ISS atmosphere to facilitate the drying out of the sensor – though there was no guarantee that that procedure would work.

Another potential method for recovering the failed sensor involved R&Ring in the HUT to “get a clean sensor.” However, this procedure has never been performed in orbit and would have required the dedication of two ISS crewmembers for over 8 hours.

Moreover, “Even if this is done, there’s no reason to believe we would not also fail the new sensor during an EVA.  Therefore we do not plan to perform a HUT R&R for Wheels’ suit,” noted NASA.

As such, a plan was developed to go into the second EVA assuming Wheelock’s CO2 sensor is failed or would fail during the course of the EVA should the sensor be recovered.

Overall, the crew was reported to be in good spirits with good cooperation and help from all six ISS crewmembers.

“Crew spirits are good, Russians helping and available to help.  Ground folks are 24/7 and doing tremendous things.  All are watching for fatigue etc. but are conscious of the calendar timeline risks we have until the system is restored.”

As part of the final preparations for EVA-16, Tracy Caldwell-Dyson and Doug Wheelock spent Tuesday configuring the tools they will use on today’s spacewalk as well as reviewed last minute timeline/procedure updates and tech manuals.

After these activities were complete, Caldwell-Dyson and Wheelock were joined by fellow NASA astronaut Shannon Walker (FE-6) for a three (3) hour review of the latest EVA procedures, included updates to the Robo/SSRMS (Space Station Remote Manipulator System) instructions. 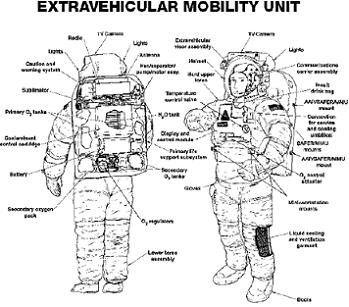 Meanwhile, and in addition to a teleconference between the three NASA astronauts and EVA specialists in MCC-Houston, Doug Wheelock attempted to restore functionality the failed CO2 sensor in his EMU.

“In an attempt to restore the failed CO2 sensor in Doug’s EMU#3005, Doug set up the sensor to flow O2 through it for an hour to remove the suspected moisture, and then check the sensor’s functionality,” notes Tuesday’s On-Orbit Status report.

The procedure was successful and the CO2 sensor is working and deemed “OK” for EVA-16.

Further preparations included the installation of one Russian “Pille-MKS” radiation dosimeter into each of the two EMUs to be used for EVA-16.

“Working with Doug, FE-3 Mikhail Kornienko retrieved three Russian “Pille-MKS” radiation dosimeters, recorded their dosages in the Reader and equipped each of the two EMUs for tomorrow’s spacewalk with a sensor unit (A0306 & A0307),” states the status report.

Finally, Shannon Walker – Robo/SSMRS operator for EVA-16 – reviewed all uplinked materials regarding Ammonia decontamination procedures should they be needed at the end of the spacewalk.

Walker also verified the readiness of all hardware that will be required for today’s spacewalk as well as configured the Cupola Robotic Workstation as a backup for the necessary SSRMS ops, replaced the Dynamic Onboard Ubiquitous Graphics (DOUG) cable from the A31p laptop used for EVA-15 to Station Support Computer-8, and confirmed proper receipt of telemetry from the Robotics systems for “driving” the DOUG animation during EVA-16.

Walker also deactivated the amateur radio equipment in the Service Module in order to prevent any RF interference during the spacewalk and closed the protective shutters on the Cupola and Destiny and JEM PM labs.

Caldwell-Dyson and Wheelock then began their EVA campout procedures at around 3:55p.m. EDT Tuesday, August 10 when they began a ~1-hour 5-minute oxygen mask prebreathe. Around this time the Quest Airlock (A/L) hatch was closed and the A/L depressurized from the standard 14.7 psi to 10.2 psi.

The spacewalking duo then went to bed around 5:30p.m. EDT. Tuesday before awaking around 2a.m. EDT to begin final spacewalk preparations. The Quest A/L was then temporarily repressurized to allow Caldwell-Dyson and Wheelock a masked hygiene break from ~2:35a.m. EDT to ~3:35a.m. EDT

After egressing the A/L, Wheelock retrieved the Vent Tool Extender (VTE) while Caldwell-Dyson translated to the PM worksite (referred to as Step 1 in the EVA-16 timeline overview).

By this time, the pressure inside the Loop A NH3 system was already lowered from 370 psi to ~200 psi to prevent as rapid a leak as seen during EVA-15, should the leak reoccur – which it didn’t. 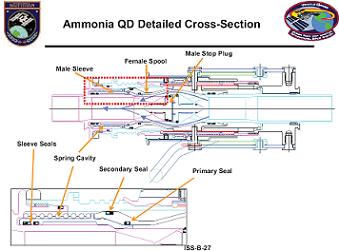 Once Caldwell-Dyson was joined by Wheelock, Wheelock performed Step 2 – closing the M3 QD.

Once the QD was closed, one of two procedures/timelines were open to the spacewalkers. If no leakage (or ‘snowflakes’) are observed then Step 4 of the EVA-16 timeline will be skipped – an event that could save ~2 hrs of EVA time – and the M3 QD left closed for the remainder of the EVA.

If a leak is detected, Wheelock will re-open the M3 QD to 90% using the Spool Positioning Device (SPD).

Small amounts of “snowflakes” were observed, but nothing to the levels seen during the opening EVA. The main problem came when Wheelock tried to remove the QD – which refused to budge.

After being given permission to “violently” shake the QD, in order to remove potential ice from hindering its removal, Wheelock’s brute force resulted in success, as the QD came loose.

Wheelock then closed Male 1/Female 105 QD at the S1-to-S0 interface, while Caldwell-Dyson’s closing of the M1/F105 QD at the S1 DC to DC Conversion Unit wasn’t required. 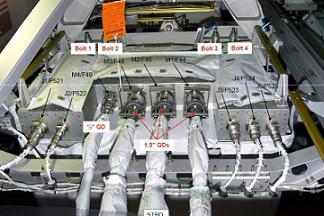 Meanwhile, Wheelock retrieved an Adjustable Grapple Bar (AGB) from External Stowage Platform 2; before the spacewalking duo attached the AGB to the failed PM. This proved to be slightly problematic, although they were already way ahead in the timeline, thanks to the lack of leaking from the M3 QD.

Under Step 13 of the scheduled timeline, Wheelock and Caldwell-Dyson removed the failed PM from the S1 truss and stowed it to a Mobile Base System (MBS) Payload ORU Accommodation (POA) at Worksite 2 where it will remain for an indefinite period of time.

With those procedures complete, Wheelock and Caldwell-Dyson had the option to perform three get ahead tasks for EVA-17 (the third EVA in the Loop A NH3 PM R&R effort).

These get ahead tasks include (in the order listed by NASA): C/L bag transfer to External Stowage Platform 2, venting of GN2 (gaseous nitrogen), and the breaking of torque bolts on the spare PM to be used during EVA-17.

Both spacewalkers made their way to ESP-2 to work on the new Pump Module, where it was decided they would not break the torques, but instead remove insulation tape and remove three of the electrical connections.

Following clean up tasks, the duo ingressed Quest to end a highly successful EVA at a total duration of 7 hours and 23 minutes.