Shuttle Program updates MPS Inventory for STS-133 and beyond 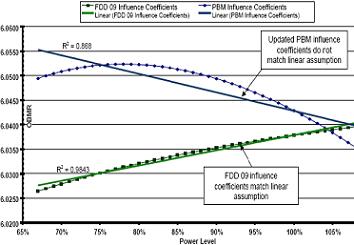 For what is likely the last time during the execution of the Space Shuttle launch/mission manifest, engineers from around the agency have updated the Main Propulsion System (MPS) Inventory – an extensive database aimed at continuously adding to and improving knowledge of the operational characteristics of this highly critical vehicle component.

The increase to the “approximate performance impact” comes in large part from an update to the SSME (Space Shuttle Main Engine) Power Balance Model (PBM) – a physics-based, steady state system model which reduces flight/test data and also predicts/simulates the flow of propellants and transfer of energy in the SSME – in the Level II modeling assumptions.

This update carries minor impacts to the nominal flight of the Shuttle stack and provides a “larger impact on the understanding of SSME performance and off-nominal performance cases (e.g. ARD – Abort Region Determinator).”

In fact, while the MPS Inventory is “routinely” updated every ~1.5 years as specific flight information is added to the MPS database, changes to the Inventory are in fact more numerous than the typical 1.5 year interval and are made as warranted by system performance and understanding.

STS-133 Specific Articles: http://www.nasaspaceflight.com/tag/sts-133/In the last six years alone, there have been “many updates to the Inventory” related to investigations into Low Fuel Bias, LO2 Purity, and OBMR (Over Board Mixture Ratio). As a result, knowledge and understanding of the MPS system is constantly maturing.

Specifically, the Low Fuel Bias, LO2 Purity, and OBMR investigations have “led to many changes in not only how we reconstruct flights but also how we predict them (Inventory updates, Flight based tags, CMR changes, etc.),” notes the Inventory Update presentation.

For the current update, approved two weeks ago, the SSME PBM and updates to the Flight Dispersions databases were the primary areas of focus, stemming in part from the previous OBMR and LO2 Purity investigations.

“Following the OBMR and LO2 Purity Investigations, SSME project went back and reviewed earlier testing that had been run at low power levels,” notes the presentation.

These reviews resulted in increased knowledge of the MPS system – which in turn translated into changes to the SSME PBM maps that “relate parameters to each other (Mixture Ratio, flow rate, Isp, Thrust, etc).”

The mixture ratio here has a direct effect on the SSME Influence Coefficients which are used by the MOD (Mission Operations Directorate) and Level II to “adjust performance based on power level.”

Taking this change into account, the presentation notes that there will be little change in the propellant consumption during a nominal no-fail ascent trajectory.

However, while the total propellant usage during a no-fail ascent trajectory does not change from the previous MPS Inventory, the manner in which the SSME prop consumption is distributed throughout the duration of flight does change.

Under the updates, LO2 flow rates will increase at lower power levels (i.e. during the throttle bucket and 3-g throttle) and decrease during 104.5 percent (nominal max). This will enable consumption to remain unchanged from previous. 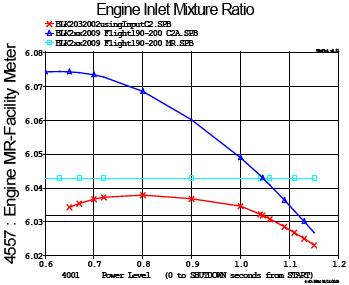 This new distribution of consumption will result in corresponding thrust, Isp, and mixture ratio variability as well as an increase in thrust during the throttle bucket and 3-g throttling phase of ascent and a decrease in thrust at the nominal max setting – 104.5 percent.

Additionally, updating the SSME Influence Coefficients and tag values required an updating of all flight reconstructions from STS-95 through STS-132 and the associated Flight Derived Dispersions (FDD) databases.

An update of the FDD database resulted in a 400 lbs reduction (a 35% reduction) of the performance collector mean and a 21 lbs (23 percent) reduction of the Thrust Shape mean. Furthermore, the “axial force collector is of a smaller magnitude during the throttle bucket, showing the models better match the flight,” notes the presentation.

Accordingly, all flight reconstructions are more accurate and more closely resemble their flights.

Nonetheless, as a result of the SSME PBM and FDD updates, the average degraded SSME tags also had to be updated.

The presentation notes that the new MPS Inventory was balanced at an average OBMR of 6.0382 based on a current CMR of 6.043. This results in an updated Fuel Bias of 954 lbs over the previous 1,059 lbs.

Combined, these MPS inventory changes result in a net performance gain of 200 lbs APM (Ascent Performance Margin), PTA occurring 5-seconds earlier, PTM occurring 4-seconds earlier, and a 14 fps increase to the stack’s underspeed during a stuck throttle in the bottom of the bucket scenario.