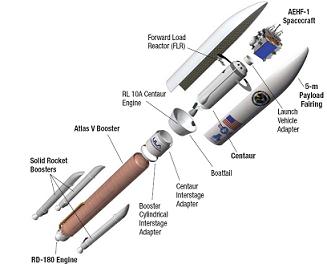 A United Launch Alliance Atlas V has launched the first Advanced Extremely High Frequency satellite from Space Launch Complex 41 at Cape Canaveral at 11:07 UTC on Saturday. The satellite was successfully deployed 51 minutes into the flight, beginning its mission to provide communications for the armed forces of the US and its allies.

The AEHF-1 satellite is the first of four Advanced Extremely High Frequency (AEHF) satellites, and was constructed by Lockheed Martin. It is based around the A2100 satellite bus, and has a mass at launch of about 6,170 kilograms. AEHF spacecraft are intended to provide secure and jamming-resistant communications to the militaries of the United States, United Kingdom, Canada and the Netherlands, and will be used to relay communications for forces on land, in the air, or at sea.

AEHF will replace the earlier Milstar system, which consisted of six satellites launched atop Titan IV rockets between 1994 and 2003. One of those satellites was lost in a launch failure, when several flight events were incorrectly programmed to occur during the first orbit rather than later in the flight. Due to this, the Centaur upper stage that was to have boosted it from low Earth orbit to geosynchronous orbit made its three burns at the wrong times, and placed the satellite into a useless medium Earth orbit instead.

Despite the failure, the other five Milstar satellites were launched successfully, and the constellation is still in service. Control over the Milstar system was transferred to AEHF mission control earlier this month.

Originally six AEHF satellites were planned, however with the development of the Transformational Satellite Communications System, or TSAT, this was reduced to three. TSAT was cancelled in 2009 due to issues with its cost and delays in its development. A fourth AEHF satellite will be produced instead of TSAT, however reports of a fifth being planned are yet to be confirmed. The US Air Force currently describes AEHF as being a four-satellite constellation.

The 531 configuration consists of a payload fairing with a diameter of 5.4 metres, three solid rocket motors augmenting the first stage at liftoff, and a single-engined Centaur upper stage. For this flight, a short payload fairing, which has a length of 20.7 metres, will be used.

The Atlas V is, along with the Delta IV, one two rockets developed as part of the United States Air Force’s Evolved Expendable Launch Vehicle (EELV) programme. It made its maiden flight in 2002, successfully orbiting the Hot Bird 6 spacecraft for Eutelsat. Of its twenty one launches to date twenty have been successful, and one resulted in a partial failure.

That partial failure occurred on AV-009, carrying the USA-194 spacecraft, and was caused by a valve failing to close and allowing liquid hydrogen to leak from the upper stage. The spacecraft were placed into an incorrect orbit, but were still operable.

The Atlas V’s first stage, the Common Core Booster (CCB), is propelled by an RD-180 engine which is produced by NPO Energomash of Russia. The RD-180, which is derived from the RD-170 engine originally developed for the Energia and Zenit rockets, burns RP-1 propellant and uses liquid oxygen as an oxidiser. It will ignite at T-2.7 seconds, and 1.9 seconds later it will reach its expected thrust level for launch. 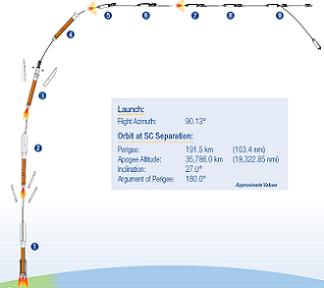 The three Aerojet solid rocket motors will ignite once the engine reaches full thrust, and at T+1.1 seconds the AV-019 will lift off. Five seconds into the flight, it will begin a series of roll, pitch and yaw manoeuvres to attain the proper trajectory for its ascent to orbit. The pitch and yaw manoeuvres will last around fifteen seconds, with the roll manoeuvre lasting twenty seven seconds.

Thirty four seconds into the flight, AV-019 will throttle down to pass through one of two areas of maximum dynamic pressure, or max-Q. It will throttle back up to full thrust nine seconds later, and one second later dynamic pressure will peak again. Ninety one seconds into the mission, the solid rocket motors will burn out; two will separate twenty three seconds later, with the third separating two seconds after those.

At two hundred and seven seconds after launch, the payload fairing will be jettisoned. It will fall into the Atlantic and is not expected to be recovered, however on the previous flight, which carried the first X-37B spacecraft, part of the fairing washed ashore in South Carolina and has since been put on display in a local museum. Six seconds after the faring separates, the forward load reactor, a device used to dampen vibrations within the fairing, will follow suit.

Booster Engine Cutoff (BECO), the extinction of the first stage, will occur 257 seconds into the flight, and will be followed six seconds later by the separation of the first stage. The Centaur’s RL10A-4-2 engine, which is cryogenically fuelled – burning liquid hydrogen oxidised by liquid oxygen, will ignite ten seconds after separation beginning its first burn. This burn will last nine minutes and thirty five seconds, and will precede an eight minute, nine second coast phase.

Following the coast, the Centaur will restart for a second burn, which will last five minutes and twenty seconds. This second burn will end twenty seven minutes and thirty seven seconds after launch, and will conclude the powered phase of the flight. 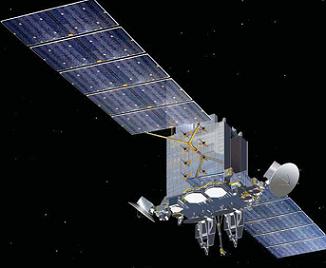 Following the end of its powered flight, AV-019 will coast for twenty three minutes and twenty three seconds before the AEHF-1 spacecraft will separate. The orbit at separation is expected to be a geosynchronous transfer orbit, with a perigee of 191.5 kilometres, an apogee of 35,786 kilometres, and 27 degrees of inclination. The argument of orbit’s perigee will be 180 degrees.

From this orbit, AEHF will raise itself to its operational geosynchronous orbit using what is believed to be a LEROS-1C apogee motor. The spacecraft also carries Hall Effect thrusters, which are ion engines that will be used for stationkeeping.

The launch of AV-019 will occur from Space Launch Complex 41 at Cape Canaveral, a complex which was originally built in the 1960s for use by the Titan family of rockets. It was first used for a Titan IIIC launch in December 1965, and was subsequently used for Titan IIIE and Titan IV launches, the last of which was a failed attempt to launch a Defense Support Program satellite in April 1999.

Following this launch, the complex was demolished and rebuilt to support Atlas V launches, and today’s will be the twentieth Atlas launch from the pad.

The complex follows the “clean pad” concept, with the rocket being assembled off-pad, atop a Mobile Launch Platform in the Vertical Integration Facility. Rollout of AV-019 to the launch pad was completed on Friday. Following its arrival at the pad, connections such as fuel and electrical supplies were connected to the platform, which will supply them to the rocket.

This is the third Atlas V launch of 2010, following that of the Solar Dynamics Observatory in February, and the first X-37B mission in April. The next Atlas V launch is scheduled to occur in September, when an Atlas V 501 will conduct NRO Launch 41, orbiting a classified payload for the US National Reconnaissance Office.

A Delta IV Heavy will be used to conduct NRO Launch 32, carrying another classified payload, and a Delta II 7420 will launch the COSMO-4 radar imaging satellite for the Italian space agency and ministry of defence. The next launch of an AEHF satellite is currently scheduled for February 2011, and will also use an Atlas V 531.