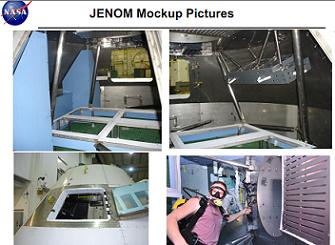 With the fate of the Constellation Program at this juncture of time all but a certainty, Program officials are, nonetheless, pressing ahead with testing of the Orion crew capsule design. Specifically, current testing on Orion’s design is geared toward EVA egress/ingress procedures and mechanics for the four person capsule that was supposed to serve as a replacement, later this decade, for the retiring Shuttle fleet.

Throughout the month of September 2010 – the final month of funding for the Constellation Program under President Obama’s vision for the future of space operations in the United States – NASA has undertaken a series of EVA egress/ingress tests on a full-scale mockup of the Orion crew module in the large Neutral Buoyancy Lab (NBL) at the Johnson Space Center.

According to the Joint EVA NBL Orion Mockup (JENOM) test overview document – available for download on L2 – “The primary purpose of [Test 8 of the EVA Systems Project Office (ESPO)] is to understand the Orion design implementation for the side hatch and internal layout.”

To accommodate this test objective, the Orion mockup’s exterior was constructed with OML, removable handrails, handrail mockups, functional side hatch, and an estimated HR from LIDS.

The handrails on the exterior of the Orion mockup were designed to be removable (or installable/removable) by the support divers so that they could be moved to various locations because the handrails are “critical for full evaluation of other ingress/egress objectives from Orion.”

In addition, the side catch was built with correct OML/IML distances, exterior hatch handle, diver installable hinges, a volumetric block for counterbalance, and a cutout in the interior of the hatch for a “grasp point.”

With the necessary hardware in place, the part of the test program that was designed by Safety Engineering & Integration to better understand portions of the Orion vehicle was in place.

In addition to better understanding the overall Orion design, “The test will help provide information to the ESPO design teams [on] mobility needs, location of vehicle interface element umbilicals on the [EV] suit, and understanding of umbilical based operations in order to assist with ESPO design maturity.” 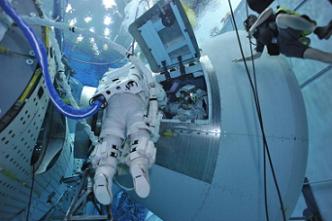 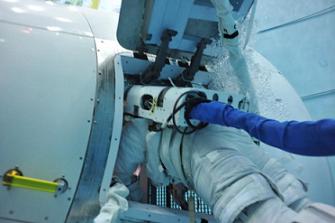 As such, the EMU used in the ESPO tests is the only suit currently certified for use in the NBL and acts as a “rough emulation of a future in-space EVA suit.”

For ESPO Test 8, two suited runs were performed, one with a full-up loaded ISS EMU with SAFER and a portion of the MWS and tools. The second run was conducted “through better emulation of ‘Config 2’ suit” with no SAFER and a VIE umbilical.

Both runs for ESPO Test 8 required a full EMU PLSS, SCM, and helmet lights/video camera – which are part of the certified EMU NBL operations.

ESPO Test 8 was successfully completed on August 26 and represented the first “suited run” of the test sequence. ESPO Test 8 occurred without issue, paving the way for the remaining tests in the sequence… which were scheduled for September 8, 10, and 16.

While the fate of Orion crew capsule in particular is still undetermined, the possibility that Orion will actually serve a vital purpose for America’s continued operations in space, and actually move beyond the ground-based design phase, is still a distinct possibility. According to sources, meetings are continuing at this time to assess the potential for an Evolved Expendable Launch Vehicle (EELV) to launch Orion on unmanned test flights.