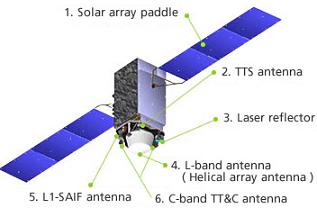 The Japanese Space Agency (JAXA) H-IIA Launch Vehicle No. 18 (H-IIA F18) has launched with the First Quasi-Zenith Satellite “MICHIBIKI” – meaning “guiding” or “showing the way.”- from the Yoshinobu Launch Complex at the Tanegashima Space Center (TNSC) on Saturday. Launch occurred at 11:17 GMT.

The H-IIA Launch Vehicle No. 18 is a “H2A202” model with two solid rocket boosters (SRBs). The fairing design is 4S (4 meters in diameter.) Mitsubishi Heavy Industries, Ltd. is in charge of the launch service of the H-IIA.

Launch was delayed around a month due to JAXA finding a potential concern in the onboard reaction wheels of the MICHIBIKI spacecraft, following notification from an overseas manufacturer.

The role of the spacecraft is to test a new Japanese concept to augment Global Positioning System navigation signals and increase positioning accuracy in urban canyons and mountainous regions.

“Quasi-Zenith Satellite As mobile phones equipped with car navigation or GPS (*1) have become widespread, positioning information using satellites is imperative to our lives,” noted JAXA. “However, in some urban or mountainous areas, positioning signals from a satellite are often hampered by skyscrapers or mountains, or significant errors are caused by reflection waves, thus we sometimes lose our way.

“The first Quasi-Zenith Satellite “MICHIBIKI” will contribute to solving such problems.”

The MICHIBIKI is the first satellite of the Quasi-Zenith Satellite System to carry out verification for technological aspects and utilization in order to complement and reinforce the GPS.

The satellite is made up of a Solar Array Paddle – to transform sunlight to electric power to provide energy necessary for the satellite. TTS Antenna – a transmission/receiving antenna for calibration tests on the onboard clock to conduct bidirectional time comparison with the ground. Laser Reflector – to carry out laser ranging for verifying orbit and clock estimations and model improvements using L-band ranging signals.