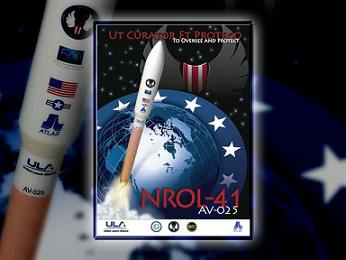 The United Launch Alliance (ULA) have launched an Atlas V with the classified NROL-41 payload for the United States National Reconnaissance Office. The rocket, flown in the 501 configuration, launched from Space Launch Complex 3E at the Vandenberg Air Force Base in California. Launch was delayed due to a range violation, prior to lifting off at 04:03 GMT (21:03 local time).

AV-025, which is the Atlas rocket that will be used for this launch, is an Atlas V 501. This configuration features a payload fairing with a diameter of five metres, no solid rocket motors to augment the first stage, and a single-engined Centaur upper stage. This configuration was first used earlier this year to orbit the first X-37B spacecraft, now designated USA-212 in accordance with the United States’ system of naming military spacecraft.

The first stage of the Atlas V, the Common Core Booster or CCB, is powered by a single RD-180 engine. The RD-180 was manufactured by NPO Energomash of Russia, and burns RP-1 propellant oxidised by liquid oxygen. The Centaur upper stage will be powered by an RL10A-4-2 engine burning liquid hydrogen with liquid oxygen again being used as an oxidiser.

The fairing has an external diameter is 5.4 metres (17.7 feet), with three different lengths available; a short fairing is 20.7 metres (68 feet) long, a medium fairing is 23.4 metres (77 feet) long, and a long fairing is 26.5 metres (87 feet) long. AV-012 will use the short fairing. Today’s launch will be the first to use the medium length fairing; previous flights have only used the short version. The fairing was produced in Switzerland by RUAG, a company which also produces similar fairings for European Ariane 5 rockets.

The Atlas V is one of the two Evolved Expendable Launch Vehicles developed to launch spacecraft for the US military. It’s maiden flight occurred in 2002, placing the Hot Bird 6 spacecraft into a geosynchronous transfer orbit. AV-025 will be will be the twenty-third flight of the Atlas V, and so far all flights have been successful except for one partial failure when the USA-194 spacecraft were placed into a lower than planned orbit.

This will be the sixth use of the five metre fairing, and the third Atlas V launch from Vandenberg. United Launch Alliance, an organisation which was formed in 2006 to provide Atlas and Delta launches to the US government, will conduct the launch.

The flight profile has not been announced, however all Atlas V flights begin with ignition of the RD-180, at around T-2.7 seconds. The rocket will lift off from the launch pad at T+1.1 seconds, beginning its climb towards orbit. Once the rocket has cleared the atmosphere the payload fairing will separate and fall back to Earth. The exact timing of this event depends upon the requirements of the spacecraft, and will probably occur between three and four minutes after launch.

Fairing separation will be followed shortly afterwards by the separation of the Forward Load Reactor, which is used to dampen the vibration of the fairing. Cutoff of the first stage will probably occur around four minutes and twenty seconds into the flight, and will be followed about six seconds later by stage separation. The Centaur’s RL10 engine should ignite about ten seconds after staging to begin its first burn.

At around this point the launch video will be terminated, and no further updates will be issued other than to confirm the outcome of the launch once it has been completed. It is likely that the Centaur will either make one long burn, or two burns, to place the spacecraft into orbit. A launch to low Earth orbit could be accomplished with either a one-burn or two-burn profile, whilst a launch to a higher orbit would require at least two burns.

The payload, currently identified as NRO L-41, is the fourth NRO spacecraft to be launched on an Atlas V, and the second from Vandenberg. No details have been confirmed about it, however many can be inferred from the circumstances of its launch. The fact that the launch is from Vandenberg eliminates the possibility of a launch to a low-inclination orbit.

The precludes the possibility of the spacecraft being a geostationary signals intelligence (SIGINT) or communications satellite. Launches of NRO satellites from Vandenberg typically result in deployment into low Earth orbits, and “Molniya” orbits. A Molniya orbit, named after a series of Soviet communications satellites which used them, is a highly elliptical semi-synchronous orbit, which allows a satellite to remain over an area of the Earth for a longe period of time, at higher latitudes than could be achieved by a geostationary satellite.

The 501 configuration Atlas V has the lowest payload capacity in terms of mass of the Atlas V family. With the small fairing this is capable of placing around 6,400 kilograms of payload into a sun-synchronous orbit, however since a larger fairing is being used, the actual capacity will be lower than this.

The size of the payload fairing, on the other hand, suggests that the spacecraft is dimensionally large. This indicates that it may have a low average density, which suggests the presence of a large lightweight structure such as a dish for communications, radar imaging, or SIGINT. Another explanation would be the presence of multiple lightweight spacecraft, however this is unlikely since such spacecraft would probably not require the larger fairing unless they were too heavy to be launched by the 501 configuration.

This suggests that neither type would require the larger fairing, and that a SIGINT launch would be beyond the capability of the 501 configuration. That said, the first spacecraft which is believed to be a current generation SDS satellite was launched twelve years ago, and it is possible that this is the first new-generation spacecraft.

This leaves low Earth orbit satellites. One possibility is that the payload could be a group of Naval Ocean Surveillance System (NOSS) satellites. NOSS spacecraft are used for locating ships from their radio transmissions, and the current generation satellites are launched in pairs. An earlier NOSS launch used a 401 configuration, but again the current NOSS design is fairly old, and the spacecraft could be the first of a new generation. Another possibility is that this is the first in a new generation of imaging satellites.

The NRO’s fleet of both radar and electro-optical reconnaissance satellites are rapidly reaching the ends of their design lives; neither has been replenished since 2005, and the second most recent launches occurred ten and seven years ago respectively. It is unlikely but not impossible that an electro-optical satellite would have a low enough density to use a 501-series Atlas, however a radar satellite, with a large dish, could.

Given the cancellation of the electro-optical element of the Future Imagery Architecture programme in 2005, it is unlikely that new-generation electro-optical satellites are ready for launch, and indeed the NRO L-49 mission, scheduled for launch early next year, is believed to be a previous-generation satellite assembled from spares to serve as a gap-filler.

Several other possibilities exist, including a one-off technology demonstrator, the first in a new series of spacecraft performing a completely new mission, or even a stealth reconnaissance satellite in a follow-on to the “Misty” and 8X programmes. The latter is unlikely however, since the US Government is believed to have terminated the Misty programme. The actual identity of the satellite will probably be determined within a few weeks by amateur observers, who will track the spacecraft and compare its orbit to the orbits of previous NRO spacecraft.

The last Atlas-Agena launch from SLC-3E occurred in October 1966, and was followed by three suborbital launches of Atlas SLV-3 rockets with X-23A as part of the PRIME programme. In August 1968, the complex was used for the single, unsuccessful, flight of the Atlas SLV-3 Burner II.

Following the 1968 launch, the complex remained dormant for nearly ten years, however launches resumed in February 1978 with the Atlas E/F. Over the next four years seven early Global Positioning Satellites were launched from SLC-3E. After this, it was used for all five flights of the Atlas H rocket, each of which orbited a cluster of NOSS satellites, however following the retirement of the Atlas H in 1987 the pad again became dormant.

In 1992 a contract to renovate the complex was signed, leading to the demolition of the old towers around the middle of the decade, and the construction of new ones. This was completed in 1996, and in 1997 an Atlas IIAS was installed at the complex for the first time. Due to a series of delays, that rocket remained on the pad for 23 months, before finally launching the Terra satellite in December 1999. This was the first launch of an Atlas-Centaur from Vandenberg.

Three Atlas IIAS launches were made from SLC-3E, the last in 2003. After this, the complex was modified to accommodate the Atlas V, which was first launched from Vandenberg in 2008.

This is the fourth Atlas V launch of the year, and the sixth launch of an EELV in 2010. It is unclear whether the Atlas V will fly again this year; a launch with the GPS IIF SV-2 spacecraft is scheduled to occur in December, however it may slip to next year.