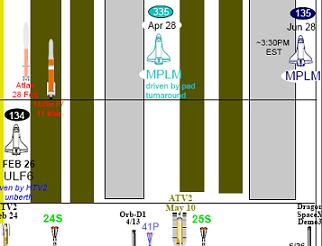 NASA managers are continuing to work the alignment process between the STS-335 LON (Launch On Need) rescue role of Atlantis – in support of STS-134 – and the yet-to-be-funded STS-135 mission. The process – which ranges from requirements on the International Space Station (ISS), to the External Tanks – allows for a smooth transition to baselining STS-135, when funded.

On the official manifest, both Endeavour and Atlantis are being processed for their respective roles relating to STS-134, with Endeavour carrying out the primary mission, and Atlantis being processed through a full Orbiter Processing Facility (OPF) flow in readiness to rescue the STS-134 crew from the ISS, in the highly unlikely event Endeavour is unable to return to Earth.

As has been discussed for some months, moves to convert Atlantis and her already-purchased hardware – such as the twin Solid Rocket Boosters (SRBs) – into a full mission in its own right have been evaluated, via both mission content options and safety assessments.

When the politically requested safety assessments came back positive, NASA managers carried out a due-diligence approach of protecting the option to launch Atlantis on STS-135 late in June of next year, effectively creating a baseline for the mission.

The final hurdle is the required funding being allocated in FY2011, which would allow NASA as an Agency to green light the mission.

As part of the requirements to protect STS-135, STS-335’s timelines were moved to align with the notional STS-135 launch date. The STS-335 crew were also selected, and are being trained for the STS-135 mission – per Single System Trainers (SST) records at the Johnson Space Center (JSC).

The selected crew was announced this week, comprising of Commander Chris Ferguson, Pilot Doug Hurley – which was expected, per SST records ahead of the announcement. They are joined by Mission Specialists Sandy Magnus and Rex Walheim.

A Program Requirements Control Board (PRCB) presentation – available on L2 – expanded on the alignment process, first outlining the additional length of time a ‘stranded’ STS-134 crew could be hosted by the ISS until Atlantis could rescue them – a factor known as CSCS (Contingency Shuttle Crew Support).

“STS-335 CSCS for STS-134: Specific analysis for the CSCS consumables is not initiated until L-2 months. The preliminary estimates for CSCS is 4+ months. Food will probably be the ‘long pole’,” noted the PRCB presentation. 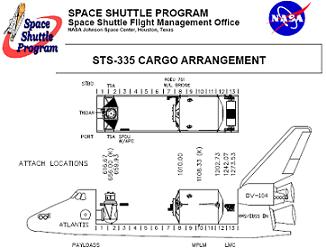 Another area covered related to Atlantis’ Payload Bay (PLB) configuration, which will now match the notional STS-135, following the move to working through the baselining requirements for the additional mission – pending what is expected to be an approval for funding the flight.

“Due to the time required to change the cargo bay configuration, the STS-335 cargo bay is being configured to match what the STS-135 cargo bay would be if the agency decides to add STS-135,” the presentation continued.

“If the agency chooses not to add STS-135, the STS-335 cargo bay will remain configured for the MPLM (Multi-Purpose Logistics Module) and LMC (Lightweight Multi-Purpose Carrie) and final rescue plans will be reviewed by the MMT (Mission Management Team). The STS-335 IPT is assessing OPS scenarios that would be pursued if STS-135 was added.”

All departments added their approval to the aforementioned changes, although the whole issue of funding is clearly the outstanding problem with comments of funding for contractor launch support personnel contracts running out in March, 2011 noted, along with a need for a contract extension, at a cost that is currently unknown. 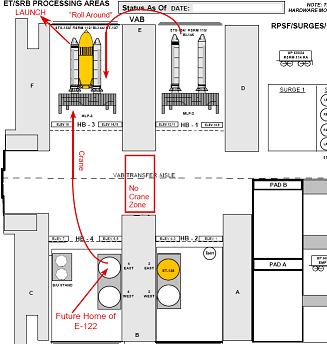 One decision that won’t be taken at this stage is which tanks will ride with Endeavour and Atlantis. While the integrated milestone charts have pre-empted STS-135 flying, by changing ET-122’s allocation to Endeavour, allowing the ‘newer’ ET-138 to fly on the final mission (STS-135), the actual decision will be left as late as possible, as managers wait on what will effectively be a green light from lawmakers, and then the Agency under that political direction.

“Proposes that the decision to place ET-122 on the stack be deferred as late as possible, to November 9th, after the expiration of the early November launch window,” noted one department on the PRCB presentation,

“While we believe both tanks to be safe, there are marginal enhancements to ET-138 which make it preferable as the last tank to fly. Once the building of the STS-134 stack has begun, it would be undesirable to switch tanks.

“If STS-133 launches in the early November launch window and STS-135 is still a possibility, then we would agree that the STS-134 stack should include ET-122.

“MOD recommends the program re-visit the STS-134 and STS-335 ET assignments prior to ET-SRB mate for STS-134.” 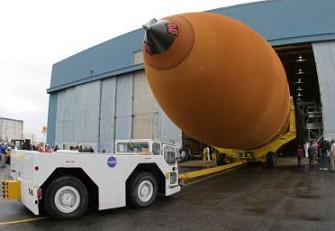 Some decisions can’t wait, with ET-122 soon to ship from the Michoud Assembly Facility (MAF), and in need to find it a home, once it arrives in the Vehicle Assembly Building (VAB).

“When ET-122 arrives at KSC it will be lifted into the VAB HB-4 (High Bay 4) Checkout cell for processing since ET-138 currently is occupying the HB-2 Checkout Cell,” noted KSC managers on the presentation.

All departments concurred with the outlined points, though added a few changes will be required in the event of swapping hardware previously designated for STS-134, with STS-335/135, based on expiring certification periods, based on a June 28, 2011 launch date. 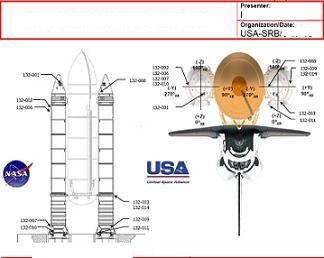 “ET-138: Camera Electronics Package expires on 3/14/11 due to battery age, which would require the following: a) initiate a waiver to fly with the expired age sensitive hardware, b) Perform Electronics Package reconditioning at KSC prior to launch).”

The ET Chief Engineer noted his concurrence on those recommendations, while MAF noted they have two spare Electronics Packages in stock, and that the replacement could be carried out at KSC if required.

As has been previously noted, Atlantis will remain as the STS-335 LON vehicle – regardless of funding – until Endeavour safely lands at the conclusion of STS-134, at which point STS-335 will be official stood down.