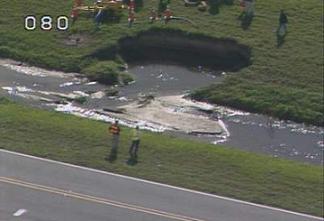 Discovery’s rollover to the Vehicle Assembly Building (VAB) has been rescheduled to 6:30am Eastern on Thursday, after a water main broke at the Kennedy Space Center (KSC) – shutting down the center to all non-essential personnel and effectively giving a large section of the workforce the day off for health and safety reasons.

Everything was on track for Discovery to leave her Orbiter Processing Facility (OPF-3) at 6:30am local time on Wednesday, ahead of an extended rollover, in order to allow her workforce to mark the veteran orbiter’s final trip to the Vehicle Assembly Building (VAB) with several photo opportunities.

“S0004 Orbiter/ET Mate is scheduled for tomorrow,” noted Tuesday processing information from the NASA Test Director (NTD) on L2. “First motion is scheduled for 0630, then Discovery will pause on the tow road for photo opportunities. Discovery is scheduled to be spotted in the VAB is at 1130.”

However, on Tuesday night, a water main break took out the required FireEx and safety water supplies, resulting in a constraint to both the rollover and numerous KSC operations due to safety requirements.

“S0004 Orbiter/ET Mate has been delayed until further notice. Water Main Break: At approximately 2300 last night, Cocoa Water had a break in one of their main water lines between the Barge Canal and Gate 2,” added the NTD on Wednesday morning.

“Currently we are without potable water, center-wide. As of 0600 Cocoa Water is still unaware of the location of this break. FireEX has been secured to prevent leakage with the loss of water line pressure. We have also lost safety showers.

“Losing both FireEX and safety showers are constraints to Roll-Over. We have applied load shedding and are currently stable, operating on a single chiller. At this time, Roll-Over is delayed until further notice.”

KSC webcam footage shows work is now being conducted on the area of the break, with an aim to complete repairs in time for normal operations on Thursday morning – allowing Discovery to rollover to the VAB.

The original plan of an extended rollover will still be carried out, pending any weather concerns.

A large amount of contingency time exists in the flow, so the delay will not have any impact on the upcoming milestones for STS-133, as Discovery continues to track a November 1 launch to the International Space Station (ISS).

No work is outstanding inside the VAB, with the sling – which will be attached to Discovery to allow cranes to raise and move her from the transfer aisle over to High Bay 3 (HB-3) – now assembled, while Orbiter Mate preps have been completed on awaiting stack, consisting of External Tank (ET-137) and the twin Solid Rocket Boosters (SRBs).

KSC Operations have begun to pick up again later on Wednesday, along with a decision to press ahead with Thursday’s rollout, with first motion tracking 6:30am local.

“KSC will return to normal operations effective 2nd shift today, Wednesday, September 8 with the exception of OSB II,” noted a KSC update. ” Potable water and food services will not be available in the LC-39 area until further notice but restrooms will be operational.

“Bottled water will be provided in the LC-39 area.  There are no water use restrictions in the Industrial Area.  Headquarters and SSPF cafeterias will be open from 5 AM to 2 PM to accommodate employees from the LC-39 area.”

Other notable milestones will also take place over the coming weeks, with the S0044 Launch Countdown Demonstration (LCD) Sim Cert Run currently scheduled to take place on Thursday. This may be delayed by one day due to Wednesday’s events.

The Flight Readiness Review (FRR) meetings are also due to pick up this month, with a Launch Readiness Review (LRR) scheduled for September 29, followed by the major SSP (Space Shuttle Program) FRR meeting, to be conducted over two days – as per usual – on October 6-7 at the Johnson Space Center.

The Terminal Countdown Demonstration Test (TCDT) – a full dress rehearsal for the countdown with the crew, orbiter at the pad, and controllers in the Launch Control Center (LCC) Firing Room – will result in a T-0 on October 15.

The SSP FRR will lead into the Agency level “joint” FRR – which will meet at the Kennedy Space Center to confirm the launch date – on October 19.

The mission will then be handed over to the control of the Mission Management Team (MMT), who will meet on L-2 days to launch, and again – if required – on L-1, prior to their tanking/weather briefing meeting on launch day.