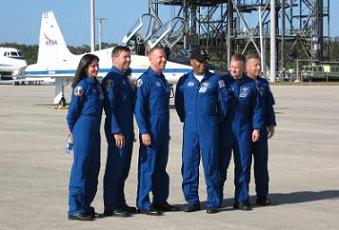 Following the changeout of leaky couplings and successful repressurization of Discovery’s Right OMS (Orbital Maneuvering System), STS-133 has entered the launch countdown for Wednesday’s launch. Discovery will be launching on her final mission, with her crew excited and honored to be riding on the veteran orbiter.

With the changeout of the Air Half and Ground Half couplings (AHC/GHC) – specifically the MD515 AHC, a Quick Disconnect which allows helium to be pumped into the OMS tank to pressurize it for flight – the lengthy process to ‘repress’ the system was completed in two stages.

With mass spec checks carried out at various stages of the represurrization, a six hour process called the “cheat load” brought the tanks back up to the original pressure, given the troubleshooting process called for the tanks to be completely vented. A 16 hour process to fully pressurize the tanks followed.

With no leaks found during the mass spec tests, engineers are fully confident the issue has been fixed – closing the Interim Problem Report (IPR53), and allowing Discovery to press forward towards the start of S0007 tasks, otherwise known as the launch countdown, with Call To Stations (CTS) beginning at 1:30pm local time on Sunday.

A complex ballet of operations will be conducted through S0007 – which officially began at 2pm local time – with several major milestones including the retraction of the Rotating Service Structure (RSS) and a Mission Management Team (MMT) meeting for the “go” to tank Discovery’s External Tank.

However, first up in the list of major milestones will be the “pad clear” operation of Power Reactant Storage and Distributation (PRSD) loading, scheduled for 6am local on Monday. Once completed, the pad is expected to reopen at 6pm late that day. NASA Test Director (NTD) Steve Payne also noted that the reactant O2 offload is planned for 180 lbs during Sunday’s media briefing, in which he paid tribute to Discovery.

“She’s been an incredible vehicle and she caps a long and distinguished career with this particular flight,” Mr Payne said, via his opening remarks. “She’s always amazed us with everything she can do and we expect this flight should be no different.”

As is usual ahead of a mission, the lead flight directors, mission controllers, and the flight crew met with the media at the Johnson Space Center (JSC) to discuss the upcoming mission in depth one last time before Discovery’s last launch. After their traditional preflight news conference the crew met individually with representatives of several media organizations, including NASASpaceflight.com, to further discuss their assignments for the mission and training to get ready.

When the flight crew for STS-133, also known as the ISS ULF-5, was officially announced in September, 2009, the mission was expected to close out the Space Shuttle Program (SSP), until STS-134’s payload issues resulted in Endeavour’s mission swapping places with Discovery, whilst Atlantis’ notional STS-135 is likely to gain the final mission honor.

“When we started out, we were going to be the final flight in the Space Shuttle Program, and the objective of that final flight was basically to leave (the) Space Station in the best possible configuration, which means get the maximum amount of upmass to station (of) the supplies they need, because it would be the last Shuttle flight, and leave it in the best condition possible,” said commander Steve Lindsey, a veteran of four previous Shuttle missions.

Commander Lindsey will be joined by pilot Eric Boe – who has flown on a Shuttle mission once before – and four mission specialists; Alvin Drew, Tim Kopra, Mike Barratt, and Nicole Stott – all of whom have previous spaceflight experience.

At the time of the crew announcement, Nicole Stott and Mike Barratt were serving on the International Space Station as members of the Expedition 20 crew. 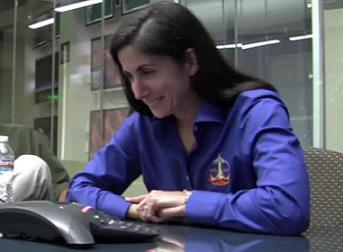 “It actually was a pretty surprising thing for me, just in general, because I was only on station for three weeks when I got the word that I’d be assigned to this flight,” Stott recalled. “I was really happy about it. My husband was definitely surprised by a call at I think two o’clock in the morning his time, when I called down to say ‘Are you willing to go for this kind of thing?’ And he was very supportive, like he’s been all along.”

For Barratt, it was also surprising. “It actually almost knocked me off the treadmill,” he joked. “Nicole Stott was up there with me when that message came up, so she got the same message. I was in the Russian segment, running on the treadmill, and she made me stop, which I thought was kind of strange because she didn’t look urgent at all, she was kind of smiling really big.

“She told me ‘hey you and I are both up for a Shuttle mission’ and I thought she was joking, but she doesn’t joke quite like that. So that was the way I first got inkling of that and then I went back and opened up my email and yeah, it was a bit of a shock. I had to make a phone call pretty quick – to my wife, to make sure she would let me do it.

“It was a huge honor to be asked to fly Shuttle, and knowing that the program was coming to an end, and how precious those seats were, that just raised the bar a lot. That was part of the shock and surprise of being named to that crew, and of course at the time we were asked, we were asked to be the last crew, and were chosen specifically for that.”

Like Barratt and Stott, Kopra also has long duration ISS experience, having been replaced by Stott on the Expedition 20 crew. One of the reasons for having three long duration station crew members with recent flight experience on the crew was due to the nature of the STS-133 mission at the time.

As defined at the time of the crew announcement, the mission was expected to be an 8+1 day mission: nominally eight days in duration, with one mission extension day, typically to handle any unexpected issues or extra work that comes up while docked to the station. 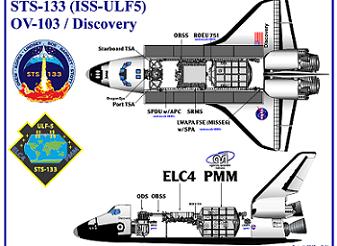 Launch was planned for mid-September, 2010, and no EVAs were planned, with only a few days allocated at the time to deliver ELC-4 and the PMM to the station, along with transferring additional cargo stored in lockers on Discovery’s middeck to station and returning other cargo from the station there.

“You know originally we had four docked days and I think they chose us largely because of the skill set they could put together,” Barratt noted. “The first iteration of our mission was kind of like a commando raid – we needed to hit the station, we needed to unload a bunch of stuff, we needed to take on a bunch of stuff, and we needed to get out of there as quickly as possible, because we weren’t carrying a lot of fuel and oxygen. So it has relaxed a little bit, but we’ve added a whole lot more to the activity.”

Barratt launched for his six-month long increment on the station – and returned home on – a Soyuz spacecraft. When comparing his experiences training for that mission and the upcoming Shuttle mission, Barratt noted three positives when training to fly on the orbiter. 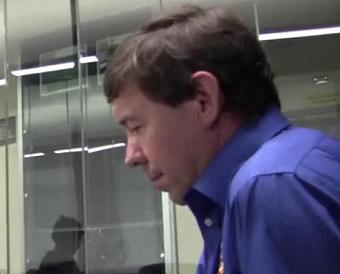 “First of all, I had trained to fly left-seat (in the) Soyuz, which is kind of a flight engineer/pilot position if you were going to make it analogous to the Shuttle,” he explained. “And so that requires extra time in Russia, an extra six plus months, and all of that training is done in Russian, and there were very little English materials when we started.

“So the two biggest factors to kind of framework that training are, number one, Shuttle training is all done at home. You’re not traveling, you’re not chronically jet-lagged, and you’re not always trying to fix things at home quickly knowing that you’re going to have to leave them for a while.

“Number two, it’s all in English – you’re not working in a second language, or having to pop between the two. And number three, the Shuttle Program is so mature that any question you have can be immediately answered by the trainers – who probably knew you were going to ask, anyway.

“Whereas the Station is very much a work in progress, it’s almost impossible to keep up with the Station because it’s always changing. So training for Shuttle is quite is bit simpler – I don’t mean to belittle it because there’s a lot to know, but it’s much more straightforward than training for a Station mission.”