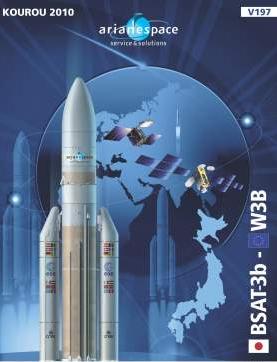 Arianespace were back in action on Thursday evening with the dual launch via their Ariane 5 ECA launch vehicle. The European workhorse lofted the Eutelsat W3B and BSAT-3b telecommunication satellites into their transfer orbits, with lift-off on time at 21:51 GMT – launching from the European Spaceport in Kourou, French Guiana. However, W3B failed early into its lifetime via a propulsion leak.

Flight 197 was the 53rd Ariane 5 launch and the fourth of 2010, following on from the successful dual-payload launches: Arianespace’s August 4 flight with RASCOM-QAF 1R and NILESAT 201; the June 26 mission that orbited the Arabsat-5A and COMS spacecraft, and the May 21 launch with ASTRA 3B and COMSATBw-2.

An Ariane 5 ECA (Cryogenic Evolution type A) – the most powerful version in the Ariane 5 range – was used for this flight.

Ariane 5’s payload lift performance for this mission was a total of 8,263 kg., which includes a mass of approximately 7,460 kg. for its satellite passengers, along with the associated integration hardware and the launcher’s SYLDA multi-payload dispenser system.

Riding as the upper passenger in Ariane 5’s payload “stack” was Eutelsat’s W3B, which was released at just over 28 minutes into the flight.  This Thales Alenia Space-built telecommunications spacecraft weighs approximately 5.4 metric tons and carries 56 transponders and will be located at an orbital position of 16 deg. East..

In addition to providing increased capacity for rapidly-expanding video platforms in Central Europe and Indian Ocean islands, W3B will initiate a new mission with bandwidth and coverage for telecom operators and Internet Service Providers in Africa to meet sustained demand for enterprise networks and GSM connectivity.

Scheduled to enter service at 16 degrees East in December this year, the satellite will replace Eutelsat’s EUROBIRD 16, W2M and SESAT 1 satellites which will all subsequently be redeployed to alternative positions.

W3B’s 56 transponders will be connected to four distinct footprints: A high-power footprint of Central Europe for Direct-to-Home broadcasting; A widebeam spanning Europe, North Africa, the Middle East and Central Asia for professional video links and data networks; A high-power beam over Madagascar and Indian Ocean Islands for DTH broadcasting; A beam sweeping across Sub-Saharan Africa and Indian Ocean islands  for regional telecoms and Internet services.

UPDATE: However, Eutelsat announced the loss of the W3B satellite, following an anomaly which was detected on the satellite’s propulsion subsystem.

Michel de Rosen, CEO of Eutelsat Communications, commented: “The loss of W3B is a disappointment for Eutelsat and for our customers. We share it with our partners, in particular Thales Alenia Space and with the insurance community. Our attention is now focused on delivering the W3C satellite to 16 degrees East in mid-2011 and on initiating a new programme to compensate for this loss.”

Eutelsat note they are fully insured for the investment in W3B, which guarantees that the Group does not incur any direct financial loss. The non-availability of W3B does not change the financial guidance issued by the company on 30 July 2010.

With the loss of W3B, the three satellites will now remain in full service at 16 degrees East until the arrival of W3C, whose launch is on track for mid-2011. Eutelsat will also immediately initiate a new satellite programme, called W3D, for a planned launch in the first quarter of 2013.

The 2,060-kg. BSAT-3b spacecraft – which was manufactured by Lockheed Martin Commercial Systems for Japan’s B-SAT Corporation – was deployed from Ariane 5’s lower passenger position at approximately 38 minutes into the flight. It is to provide direct television broadcast services from an orbital slot of 110 deg. East.

BSAT-3b features 12 130 W Ku-band channels, eight operating simultaneously, and will be located at 110 degrees East longitude. With a design life of 15 years, BSAT-3b is based on the A2100A platform manufactured by Lockheed Martin Commercial Space Systems (LMCSS), Newtown, Pa. BSAT-3b marks the 12th Lockheed Martin A2100 satellite launched in the 1- to 4-kW class satellite range.

The satellite is comprised entirely of equipment based on proven A2100 designs and flight heritage, enhancing reliability on orbit. Lockheed Martin successfully built and launched BSAT-3a for B-SAT in August 2007 and is currently constructing BSAT-3c/JCSAT-110R, which is scheduled for launch in the second quarter of 2011.

BSAT-3b will be the 37th commercial communications satellite based on the A2100 platform delivered to customers world-wide. All 36 A2100 spacecraft successfully launched are operational and continue to perform their missions.