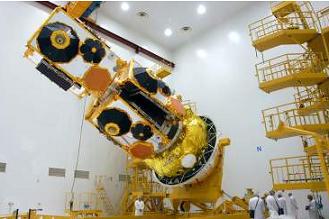 An Arianespace Soyuz 2-1A launch vehicle has lofted six Globalstar 2 mobile phone and data satellites into orbit on Tuesday. The Starsem affiliate of Arianespace were targeting the launch to take place at 17:10 GMT from Pad 31 at the Baikonur Cosmodrome in in Kazakhstan. Launch was on time, ahead of 100 minutes of flight, ending with the successful release of all six satellites.

Arianespace’s Globalstar missions are utilizing the Soyuz 2 evolved version of Russia’s venerable medium-lift workhorse launcher for these missions, which incorporates the enlarged ST payload fairing and an updated digital flight control system. Soyuz 2 is the same vehicle that Arianespace will utilize at the Spaceport in French Guiana, operating side-by-side with its heavyweight Ariane 5 and Vega lightweight launchers.

The four stage vehicle sports a Fregat Upper Stage, and will result in a nominal mission duration – from liftoff to the deployment of Globalstar’s satellites – of 100 minutes, with the six spacecraft being injected into a phasing orbit at an altitude of 920 km., inclined 52 deg.

After lift-off from the Baikonur Cosmodrome, the flight of the three lower stages of the Soyuz launch vehicle will last for 8 minutes and 49 seconds. At this time, the Soyuz third stage will separate from the nose module, consisting of the Fregat upper stage, the satellite dispenser and six Globalstar-2 satellites. The three lower Soyuz stages will fall back to Earth.

The Fregat upper stage will then fire its own engine, taking the nose module into a transfer orbit above the Earth. After this first burn, the Fregat will perform a barbecue maneuver to maintain proper thermal conditions for the Globalstar-2 spacecraft during the following coast phase, which lasts for about 50 minutes.

At the correct point on this orbit, Fregat will fire again, to reach the circular separation orbit. Following stabilization and under visibility of the Russian ground  tracking stations, the six satellites will be released from the dispenser. The separation of the two satellites of the upper dispenser mast will occur first. 1 minute 40 seconds later, the four satellites of the lower dispenser mast will be separated simultaneously.

After spacecraft separation, the Fregat upper stage main engine is re-ignited to re-enter the stage in the South Pacific ocean.

Each of the satellites – built by Thales Alenia Space – has a trapezoidal-shaped main body, and weigh approximately 700 kg. The spacecraft are equipped with 16 transponders from C- to S-band and 16 receivers from L- band to C-band.

The second-generation Globalstar spacecraft were installed in sequence on the two segments of the 6.7-meter-high conical-shaped dispenser, which then were assembled together on September 29.

Arianespace has been contracted to perform four Soyuz launches carrying six satellites each – further building Globalstar’s constellation with these 24 second-generation spacecraft.  Their deployment will secure the company’s space segment beyond 2025, ensuring continuity for its mobile satellite voice and data services provided to businesses, governments and consumers.

The four new missions follow eight flights performed by Starsem from 1999 to 2007 using an earlier Soyuz version to orbit a total of 32 first-generation Globalstar spacecraft.  Each of those launches orbited four of the 450-kg. satellites.

Products and services supported are expected to include: push-to-talk and multicasting, advanced messaging capabilities such as multimedia messaging or MMS, mobile video, geo-location services, multi-band and multi-mode handsets, and data devices with GPS integration.

The second-generation satellites are also designed to support Globalstar’s current lineup of voice, Duplex and Simplex data products and services including the Company’s lineup of Spot retail consumer products.