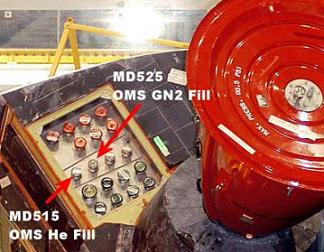 Engineers have completed S0071 tasks to pressurize Discovery’s Right OMS (Orbital Maneuvering System), following the changeout of related couplings/seals which delayed the start of the launch countdown (S0007). The repress of the OMS tank was lengthy process, with managers deciding on Saturday to move the launch date to Wednesday to avoid constricting S0007 tasks. Those tasks are complete and the countdown is to begin on Sunday.

Discovery was back into a nominal flow towards the original start of the launch countdown (S0007) – which was scheduled for 3pm local on Friday – following the repair of the Right OMS crossfeed flange, which required the changeout of two internal seals.

IPRs during major tasks – such as pressurization of the vehicle – are not uncommon. However, Thursday’s overnight operations to conduct S0071 tasks encountered two issues, though it has already been noted there is no relation to the aforementioned work on the crossfeed flange.

The first issue, classed as IPR-52, related to a gaseous nitrogen (GN2) leak check on a Quick Disconnect (QD) fill valve – part of the system’s Ground Support Equipment (GSE) – which saw engineers attempt to slam the Air Half Coupling (AHC).

“De-mate of the QD revealed no obvious problems with the GHC (Ground Half Coupling) or AHC. The GHC was then removed, replaced, and re-mated to the AHC. The fill valve leak check procedure was repeated with no joy. The same flow thru leakage was seen.

“The problem appears to be with the AHC on the flight vehicle. The decision was made to proceed with S0071 and pressurize all the tanks as planned and then go back and fix this AHC after S0071. This part of the system is all clean gas and the QD can be isolated with the fill valve so it is possible to repair after pressurization is complete.”

As per the NTD, IPR-52 would have likely resulted in no delay to the start of the launch countdown, which includes some breathing room for minor troubleshooting tasks to be worked on without delaying the launch date itself. However, the second issue required repair work to take place ahead of S0007.

Known as IPR-53, this issue is related to an o-ring being found “stuck” inside a helium coupling (another AHC), which required removal and replacement.

“Engineers bypassed the GSE orifice and was able to get the poppet closed. The AHC/GHC were demated to determine cause of the stuck poppet and half of the GHC o-ring was found stuck inside the AHC. This will drive R&R the AHC on the right OMS helium tank.”

Once the R&R had been completed, Discovery will have to resit her pressurization tasks on the Right OMS tank, which is conducted by using helium.

“Engineering is developing a plan and determining the parts required to vent the tank in order to perform the R&R,” the NTD continued. “After the AHC is replaced, we will essentially have to perform S0071 ops again for the right OMS tank.”

*Updates will appear here. Refer to this page, live updates via the STS-133 section, and L2’s live processing.*

UPDATE 2: Helium venting. IPR classed as still in work as of 10pm. Second shift is carrying out the coupler changeout. Testing will be conducted, before getting back into repress.

UPDATE 3: Seal R&R complete. Mass Spec checks in work. Will be followed by an initial load (six hours) prior to COPV full load process (16 hours). Managers to meet at 8am to discuss if they will head into S0007 Launch Countdown today, for a launch on Tuesday.

UPDATE 5: Full load pressurization began at 15:10 local, and will take 16 hours to complete.

Meanwhile, no other issues are being reported with Discovery, with other pressurization tasks and closeouts either complete, or in the process of being completed.

“S0071 Hyper/MPS Pressurization for flight is still in work and is expected to be completed by mid 1st shift today. The MPS/SSME portion is complete and the team is continuing with the left OMS load to flight pressure. The right OMS tank remains locked up at 1st stage press, but will have to be vented down to resolve the AHC discrepancy in IPR-53.