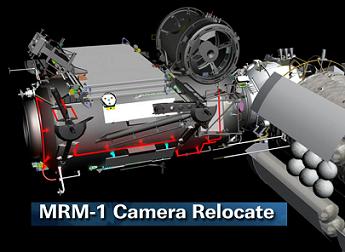 The Russian EVA-26 has been completed Monday, with Russian cosmonauts Fyodor Yurchikhin (EV-1), and Oleg Skripochka (EV-2), woking on the outfitting of the exterior of the Service Module (SM) for future assembly work and the support of external experiments. This was the fifth spacewalk for Yurchikhin, and the first for Skripochka.

The hatch was opened, marking the start of the EVA, at around 3 PM GMT. The hatch was closed and repressurisation will begin at 9:22 PM GMT, which marked the end of the EVA. In total, the EVA lasted 6 hours and 22 minutes.

The EVA was controlled by Mission Control Center-Moscow (MCC-M), also known as the TSuP, which is located in Korolev just outside Moscow. Yurchikhin was wearing the red-striped Orlan-MK #4, while Skripochka was sporting the blue-striped Orlan-MK #5.

Assembly and maintenance tasks to be performed by the EVA-26 spacewalkers included the installation of the URM-D portable multipurpose workstation on Plane IV (starboard side) of the SM Work Compartment (RO) Large Diameter (LD).

The camera was used during STS-132 in May to dock MRM-1 to the Functional Cargo Block (FGB) nadir port with the Space Station Remote Manipulator System (SSRMS).

Now that MRM-1 is docked to its final home on FGB nadir, the camera is no longer needed at this location, and so it will be relocated to the nadir side of MRM-1 in order to monitor future Soyuz dockings to the module.

However, this task wasn’t completed during the EVA.

Other assembly and maintenance tasks conducted included installing a gap spanner on Docking Compartment-1 (DC-1), installing struts between MRM-2 & the SM and MRM-2 & the FGB, and removing an antenna on the SM Transfer Compartment (PkhO). 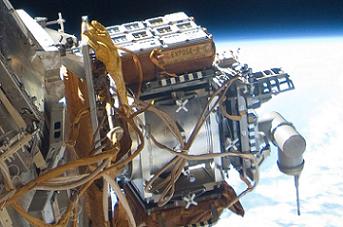 Research tasks conducted on EVA-26 included many tasks located on the portable multipurpose workstation on Plane II (port side) of the SM RO LD.

These tasks include wiping down the KONTUR (“ROKVISS” robotics) monoblock science hardware with dry towels before deactivating and removing it, installing a protective cover on the EXPOSE-R experiment before disconnecting and removing it, and taking photos of, installing a protective cover on, and disconnecting & removing the IPI-SM monoblock unit (accelerator channel) of the IMPULSE plasma pulse injector experiment.

The spacewalkers also installed fasteners and an SKK #1-M2 materials experiment cassette on MRM-2, and conduct the “Test” experiment on the SM and DC-1, which involved taking samples from the external surfaces of the modules. 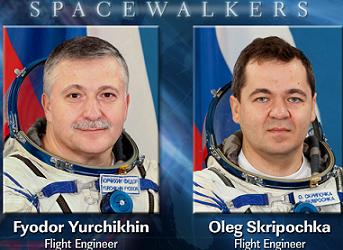 The six members of the Expedition 25 crew woke at 6:00 AM GMT, whereupon they ate breakfast before helping EV-1 Yurchikhin and EV-2 Skripochka don their Orlan-MK spacesuits. Yurchikhin and Skripochka will then head into DC-1, which will be the primary Airlock (A/L) for EVA-26, to begin hatch closure and depressurisation preparations.

DC-1 is docked to the nadir port of the SM. The SM nadir port is located on the SM at a juncture known as the Transfer Compartment (PkhO). The PkhO has A/L capability, and so it will serve as the backup A/L in the event that the primary A/L cannot be repressurised at the conclusion of the EVA.

Per ISS flight rules, which state that all crewmembers must have access to a Soyuz spacecraft in the event of an emergency, some crewmembers had to be isolated from each other for the duration of the EVA. 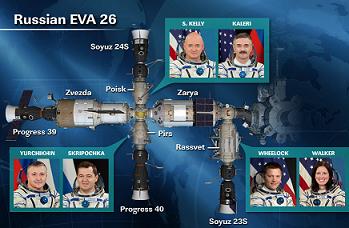 The crew of Soyuz TMA-19/23S, which includes Station Commander (CDR) Doug Wheelock and Flight Engineer-6 (FE-6) Shannon Walker, had access to the majority of the station during the EVA, bar the SM, DC-1 and MRM-2. This is because their Soyuz TMA-19 spacecraft is docked to the nadir port of MRM-1, which is located on the nadir port of the FGB, forward of the SM PkhO.

The US segment of the station could also be accessed via the forward port of the FGB, thus was available to Wheelock and Walker during the EVA. The third TMA-19 crewmember, Fyodor Yurchikhin, was outside conducting the EVA.

The aft portion of the SM, which will be cut-off from the FGB and MRM-2 via the closed hatches to the PkhO, remained uninhabited for the duration of the EVA. 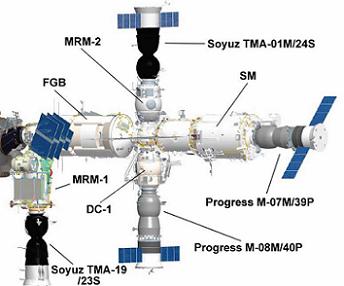 The hatches leading to the station’s two visiting Progress vehicles were also been closed off. The hatches to Progress M-08M/40P, which is docked at DC-1 nadir, were closed because DC-1 needs to be depressurised for the EVA.

The hatches to Progress M-07M/39P, which is docked at SM aft, were closed as the SM were not accessible during the EVA, and so if the PkhO could not be repressurised due to a problem, M-07M could be undocked in order to allow a Soyuz to dock at SM aft in order to enable the crew to gain access to the SM.

A recent change in ISS flight rules holds relevance to EVA-26. On Wednesday 10th November, the ISS Mission Management Team (IMMT) approved a flight rule change which allows Russian EVAs to be conducted over the Continental US (CONUS). In the past, Russian EVAs could only be conducted in periods when the ISS’s orbital plane passed over Russian Ground Sites (RGSs), due to a need to directly downlink Orlan suit telemetry via a Russian Very High Frequency (VHF) link.

Up until now, the main VHF-2 channel utilised by the ISS, Soyuz and Orlan had been limited only to emergency or contingency scenarios. The new flight rule allows the VHF-2 link to be used by for downlinking Orlan suit telemetry, as well as emergency and contingency scenarios. The use of VHF over CONUS requires pre-coordination by the Goddard Space Flight Center (GSFC), due to its frequency proximity to those in use by general aviation. 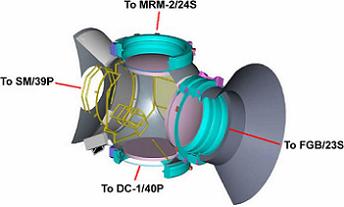 On Friday 12th November, the Expedition 25 crew conducted a “dry-run” of EVA-26, which was a run-through of all EVA-26 procedures up to the point of hatch closure and depressurisation. Steps completed by Yurchikhin and Skripochka included removing air ducts between the PkhO and the rest of the station, configuring communications for the EVA, and checking out & donning their Orlan-MK spacesuits.

The pair then conducted a checkout of their suits, including leak checks, comm. checks, temperature control and cooling system checks, and mobility/translation checks inside DC-1.

The dry-run is designed to identify any potential problems which might affect or delay the real EVA prior to depressurisation and hatch opening. The dry-run was successful, with no problems reported by the crew.

In an event unrelated to EVA-26, Progress M-05M/37P, which launch & docked to the ISS in April and undocked on 25th October, was de-orbited for a destructive re-entry today after a three week autonomous free-flight mission to conduct scientific research. For the de-orbit burn, the main engine fired in a retrograde direction for 186.2 seconds. Fragments of the Progress fell down in the southern area of the Pacific Ocean.

Indentity of one of the Chinese female taikonaut candidates revealed