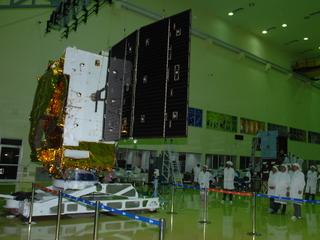 Arianespace are back on the pace, with another dual launch taking place on Friday via their Ariane 5 ECA launch vehicle. The European workhorse is lofting HYLAS 1 and Intelsat 17 into their transfer orbits, with lift-off on time at 18:39 GMT – launching from the European Spaceport in Kourou, French Guiana.

Flight 198 was the 54rd Ariane 5 launch and the fifth of 2010. The Ariane 5 ECA (Cryogenic Evolution type A) – the most powerful version in the Ariane 5 range – was used for this flight.

For this mission, Ariane 5 delivered an estimated 8,870 kg. total payload, of which approximately 8,070 kg. is the combined mass of Intelsat 17 and HYLAS 1, with the remaining weight represented by the SYLDA dispenser system and integration hardware.

During the 49 minute flight, Intelsat 17 was released first, followed by HYLAS 1.

The mission’s Intelsat 17 payload was produced by Space Systems/Loral based on the company’s LS 1300 Omega satellite bus, and will be positioned at an orbital slot of 66 deg. East after its deployment by Ariane 5.

Its C- and Ku-band capacity, combined with and multi-continental coverage, will offer programmers distribution over a region that extends across Asia and into Europe and Africa.  This is the latest in a long series of Arianespace launches for Intelsat, the leading provider of fixed satellite services worldwide.

HYLAS 1 is the first satellite for London-based Avanti Communications, which sells satellite broadband services to telecommunications companies for the supply to residential, enterprise and institutional users.

“We have chosen Arianespace for the launch of HYLAS as they have demonstrated the right combination of reliability, value and performance,” said David Williams, Chief Executive of Avanti Communications Group plc. “Their track record is the best guarantee of success. HYLAS, once in orbit will begin a new era in broadband services for the people of Europe and so a reliable and successful launch is of huge importance.”

Designed and built by EADS Astrium in partnership with the Indian Space Research Organisation, HYLAS 1 will bring high-speed broadband services to remote rural areas across Europe. The flexibility of its payload enables Avanti Communications to change the bandwidth of its 8 Ka-band beams while in orbit at a position of 33.5 deg. West, maximizing the satellite’s efficiency.

“Arianespace is proud of this opportunity to serve a new satellite operator and I would like to thank Avanti Communications for its choice,” added Arianespace Chairman and CEO Jean-Yves Le Gall . “This new contract, the 11th signed in 2009 and the 2nd in the United Kingdom, is clear recognition of the quality and competiveness of our launch Service and Solutions offer.”

The platform is a three-axis stabilised design capable of delivering about three kilowatts of power over a mission lifetime of around 15 years. Its structure is based around a load-bearing central cylinder made of carbon fibre reinforced polymer (CFRP), hosting a pair of propellant tanks in its interior and incorporating a standardised launcher interface.

Arianespace remains on track for a total of six Ariane 5 flights in 2010.  Previous to Friday’s launch, the workhorse successfully launched the W3B and BSAT-3b satellites – although W3B later failed on orbit.

It was preceded by three other dual-payload missions: an August 4 flight that orbited RASCOM-QAF 1R and NILESAT 201; the June 26 mission with Arabsat-5A and the COMS spacecraft; and the May 21 launch with ASTRA 3B and COMSATBw-2.