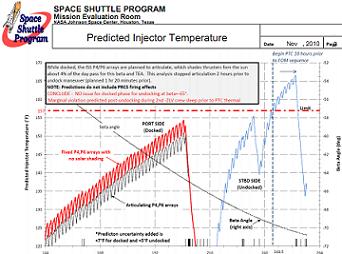 As Shuttle Program engineers continue to work through the final phases of repairs to Discovery’s External Tank Intertank stringers, focus now turns in earnest toward a discussion on the development/approval of flight rationale for ET-137, as well as the available launch opportunities for STS-133/Discovery in December 2010 and potentially early January 2011 – before a long Solar Beta Angle Cutout and an extremely busy schedule of ISS traffic would force a delay of the mission to NET February 27, 2011.

Originally stemming from a desire to gain additional launch opportunities in the early November window for STS-133, a review of the Solar Beta Angle constraints for the mated Shuttle/Station stack was undertaken by NASA teams at the request of Shuttle Launch Integration Manager Mike Moses.

As referenced by Derek Hassman, NASA flight director, in November 2002, “The beta angle is the angle between the orbital plane [of the ISS and Shuttle orbiter] and a line drawn from the Sun to the Earth. As the beta angle increases, the ISS is exposed to more sunlight per orbit..

“This can create thermal problems, so special attitudes are chosen to counter these effects. The shuttle also has thermal constraints under these conditions. Since the attitude requirements [for thermal regulation] of the ISS and shuttle would conflict when docked, shuttle/ISS flights are scheduled to avoid periods when the beta angle exceeds 60 degrees.”

Specifically, the Shuttle orbiter must undock from the International Space Station before (or very, very shortly after) the beta angle exceeds +/-60 degrees; further, if the deorbit burn is scheduled to occur after exceedance of a 60 degree Beta Angle, 10 hours of “Passive Thermal Control (PTC) [are] required prior to Deorbit Prep,” notes a November 2010 Beta Angle constraints review document available for download on L2.

Based on this Flight Rule, and the length of Discovery’s final mission, any launch attempt after Nov. 7 (and assuming an execution of the full-up, nominal mission timeline) would have resulted in a docked exceedance of the Beta Angle constraint.

As such, a study was kicked off to determine what options, if any, were available in terms of relaxing the conservative Beta Angle assessment, thereby granting additional launch opportunities to Discovery in the early November window.

The analysis that followed showed that the Shuttle orbiter and ISS could support a docked mission up to but not exceeding a +/-65 degree Beta Angle.

In all, only the PRCS (Primary Reaction Control System) thrusters needed further, detailed analysis due to potentially unacceptable high temperatures toward the end of the docked period. In turn, models were created to gather and assess data from previous high Beta flights (including STS-120, which carried a docked beta angle of -63 degrees).

“Steady state biases that account for differences in environmental constants, model correlation, ISS shading, and uncertainty margin” were employed in the analysis for the PRCS thrusters. ISS shading of the PRCS was specifically examined for possible cooling effects and resulted in a shading simulation of ~4 percent of a daytime orbital pass at a Beta equal to -65.2 degrees. 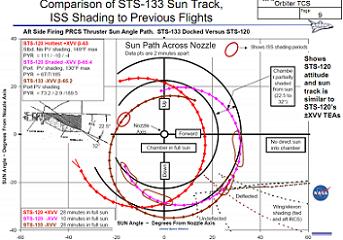 In all, this analysis showed that there would be “No ISS shading for this period.. PRT accepts the PRCS conditions since the predictions do not violate the operational valve seat limit.”

With all these parameters in place, the analysis showed that, for this specific window in early November, the highest temperature expected on the PRCS thrusters (thruster L1L – the aft-most yaw thruster) would be below 150 degree – well below the 157 degreee valve seat operational limit.

This, coupled with a change of the -ZLV -XVV post-undock attitude to a biased -ZLV -XVV or a -ZLV +YVV attitude for 2-3 orbits (worked around water dumps, Flight Control System checkouts, etc.) and PTC attitude for the 10hrs leading up to Deorbit Prep, would protect all Orbiter thermal limits.

Furthermore, the analysis showed that there were no Main Landing Gear tire material limit concerns given that the high beta angle would not be present for the duration of the docked mission; there were no issues identified for the Orbiter Boom Sensor System (OBSS) EEE box in the planned park positions; and there were no hatch mechanism or APAS issues.

Thus, a Beta Angle of ~-65 degree was found to be acceptable from an orbiter thermal standpoint for the early-/mid-November 2010 launch period.

With this work completed, the presentation does not make note of whether this Beta Angle analysis could be carried forward to further Beta Angles that would constrain NASA’s ability to launch STS-133.

With NASA currently targeting NET (No Earlier Than) December 3, 2010 to launch Discovery, and that launch window constrained to Dec. 3-7 due to the desire to disallow Discovery the ability to be docked to the ISS during the scheduled Dec. 17th docking of the Soyuz 25S, Discovery would officially be afforded no further launch opportunities until February 27, 2011.

However, as previously reported by NASASpaceflight.com, NASA has begun assessing additional launch options in the mid- to late-December range. 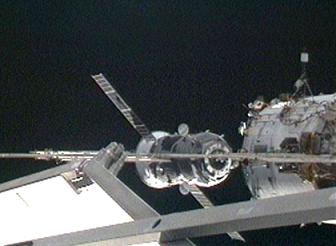 According to the November 18th Standup Integration Report, “The [STS-133] launch date CR (Change Request) for November 30 is coming to the PRCB (Program Requirements Control Board) today. Starting to look at some opportunities after the 25S docking in December and early January, before the beta cutout, just to be strategic.”

This statement would lend support to a possible review and relaxing of the +/-60 degree Beta Angle constraint – seeing how the current Beta Angle restriction begins on January 1, 2011.

Further support for a review of and potential reworking of the January 2011 Beta Angle constraints came from Leroy Cain, Deputy Manager of the Space Shuttle Program: “We have other launch periods, as we always do, that carry into December, January, and February. Our next best advertised launch period is the one we were planning to fly STS-134 in, so we have a lot of options where the schedule is concerned.”

Whether or not these reviews will bear any relevance to the January Beta Angle cutout remain to be seen. As it stands now, NASA has Dec. 3-7 to launch Discovery before standing down until February 27, 2011.