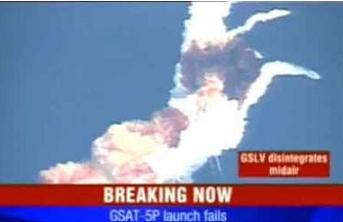 The Indian Space Research Organization (ISRO) GSLV-F06 launch vehicle has suffered another failure, when it exploded around 60 seconds into ascent. The vehicle was carrying the GSAT-5P telecommunications satellite on Christmas Day, lifting off at 10:34am GMT from the Satish Dhawan Space Centre, Shriharikota. The launch was originally rescheduled due to a leak in the Russian cryogenic engine on the third stage of the vehicle.

The standard GSLV is a three stage vehicle GSLV is 49 m tall, with 414 t lift off weight. It has a maximum diameter of 3.4 m at the payload fairing. First stage comprises S125 solid booster with four liquid (L40) strap-ons. The second stage (GS2) is liquid engine and the third stage (GS3) is a cryo stage. The vehicle develops a lift off thrust of 6573 kn.

Two of its last three flights have ended unsuccessfully, most recently with the April 15 launch of GSAT-4 – caused by an anomaly on the Fuel Booster Turbo Pump (FBTP) of the third stage.

Saturday’s failure leaves the ISRO with three failures from their last four launches, an extended record of four failures, one partial success and two successes from their previous seven launches.

The vehicle launching GSAT-5P was taller by two metres and heavier by four tonnes as compared to its standard configuration. The Russian made cryogenic engine was powered with 15.2 tonnes of fuel (liquid hydrogen as fuel and liquid oxygen as oxidizer), an increase of around three tonnes, and the engine’s length also increased.

The rocket had a larger fairing – four-metres in diameter and made of fibre reinforced plastic (FRP) – as compared to the standard configuration of 3.4-metre diameter fairing made from aluminium alloy metal.

Although the current GSLVs are mixed in their fortunes, ISRO are still pressing ahead with the development of the GSLV Mk III – which is scheduled to debut in 2012. This vehicle is designed to make ISRO fully self reliant in launching heavier communication satellites of INSAT-4 class, which weigh 4500 to 5000 kg, via mission launch capability for GTO, LEO, Polar and intermediate circular orbits.

GSLV-Mk III is designed to be a three stage vehicle, with 42.4 m tall with a lift off weight of 630 tonnes. First stage comprises two identical S200 Large Solid Booster (LSB) with 200 tonne solid propellant, that are strapped on to the second stage, the L110 re-startable liquid stage. The third stage is the C25 LOX/LH2 cryo stage. The large payload fairing measures 5 m in diameter and can accommodate a payload volume of 100 cu m.

The satellite, developed by ISRO Satellite Centre, Bangalore, was the fifth in the GSAT series. It had a designed mission life of 12 years.