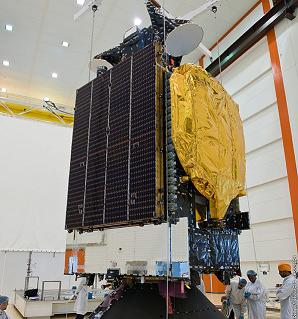 Arianespace have concluded their sixth, and final, Ariane 5 ECA launch for 2010, as their workhorse vehicle launched with its dual passengers – Koreasat 6 and Hispasat 1E. High altitude winds resulted in a hold at T-7 minutes, prior to Arianespace announcing they would scrub for 24 hours on Tuesday. Wednesday’s attempt launched at the opening of a 49 minute window at 9:27 GMT.

The Ariane is one flight away from the 200 missions milestone, with Flight 199 the 54rd Ariane 5 launch and the sixth of 2010. The Ariane 5 ECA (Cryogenic Evolution type A) – the most powerful version in the Ariane 5 range – used for this flight.

The launcher carried a total payload of 9,259 kg, including 8,170 kg for the Hispasat 1E and Koreasat 6 satellites, which were released into their targeted orbits. The remaining weight was represented by the SYLDA dispenser system and integration hardware.

Koreasat 6 rode as the lower passenger during the ride to the transfer orbit, deployed after its companion payload, HISPASAT 1E.

Fitted with 53 active Ku-band transponders, the powerful satellite will provide Hispasat with additional capacity, enabling it to offer a broader range of video and data transmission services with European and pan-American coverage from an orbital position of 30 degrees West.

Hispasat 1E was the sixth Spanish satellite launched by Arianespace. The European launcher had already orbited Hispasat 1A and 1B In 1992 and 1993. More recently, in 2005 and 2006, the Hispasat group called on Arianespace to launch their XTAR-Eur and Spainsat satellites from HISDESAT.

“We are very proud and honored to be working once again with a customer as prestigious as Hispasat,” noted Arianespace Chairman and CEO Jean-Yves Le Gall. “Being chosen by a major European operator is an outstanding mark of confidence in Arianespace, and clearly reflects the quality and excellence of our launch service and solutions.”

Koreasat 6 weighed about 2,750 kg at launch, and carries 30 Ku-band transponders.  Produced by Thales Alenia Space using a Star-2 platform from Orbital Sciences Corporation, the Koreasat 6 satellite will provide telecommunications and broadcasting services throughout Korea from an orbital position at 116 degrees East.

“We are extremely proud and honored to be chosen for the second time by Korea Telecom Corporation,” added Le Gall. “Our selection is the clear recognition of the high quality and overall excellence of Arianespace.”

The launch was delayed by a week in order to allow one of its customers to perform complementary checks on their spacecraft. It has not been released as to which customer called for the delay.

The mission with Koreasat 6 and Hispasat 1E is the sixth, and concluding, Ariane 5 launch for 2010, following Arianespace’s previous mission in late November – which orbited the Intelsat 17 and HYLAS 1 spacecraft.