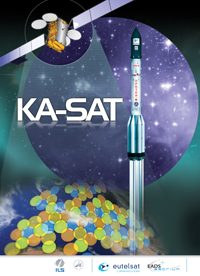 International Launch Services (ILS) have launched their Proton-M rocket on Sunday, on a mission which is marking the quick return to flight for the Russian workhorse which suffered from a failure during a recent government launch. Launched at 21:51 GMT from the Baikonur Cosmodrome in Kazakhstan, the Proton deployed the KA-SAT communications satellite for Eutelsat, after what was nine hours of flight.

The Proton M launch vehicle, utilizing a 5-burn Breeze M mission design, lifted off from Pad 39 at Baikonur Cosmodrome, Kazakhstan, with the KA-SAT satellite on board. The first three stages of the Proton used a standard ascent profile to place the orbital unit (Breeze M upper stage and the KA-SAT satellite) into a sub-orbital trajectory.

From this point in the mission, the Breeze M performed planned mission maneuvers to advance the orbital unit first to a circular parking orbit, then to an intermediate orbit, followed by a transfer orbit, and finally to a geosynchronous transfer orbit. Separation of the KA-SAT satellite came approximately 9 hours, 12 minutes after liftoff.

Eutelsat’s KA-SAT is a new genera­tion of High Throughput Satellites optimized for consumer broadband services and targeting users located beyond range of high-speed terrestrial networks. Fully-operating in Ka-band frequencies and with total throughout of 70 Gigabits per second.

Through a configuration of 82 spotbeams and a ground infrastructure of ten gateways connected to the Internet, service will be provided across Europe and the Mediterranean Basin. In addition to supporting expansion of Eutelsat’s Tooway consumer broadband service, KA-SAT will open new resources for telecom operators, broadcasters and ISPs, for data and video services.

Based on the EuroStar E3000 platform, the 6,150 lb KA-SAT will have an anticipated service life of over 15 years from its orbital location at 9 degrees East.

Sunday’s launch follows an investigation into the December 5 failure of the Russian Federal mission which was utilizing a Proton M Block DM-03 vehicle, resulting in the loss of three GLONASS-M navigation satellites. 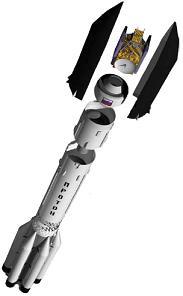 A Russian State Commission was established to determine the cause of the failure and to establish corrective actions, which resulted in ILS having to hold their K-SAT mission until an interim report was made available.

While the Proton M is a flight-proven configuration, the government launch was the maiden flight of the Block DM-03 upper stage, which is a derivative of Energia’s Block DM-3 used on the ILS Protons.

According to the preliminary State Commission report, dated 10 December, the three lower Proton M stages performed nominally, with the DM-03 handed the blame for the failure. The report also stated that there were “no issues with the functioning of LV systems and assemblies that have been detected. The trajectory parameters calculated by the LV motion control system conform to the trajectory measurements obtained from external sources.

“Command generation times of the flight timeline correspond to estimated values. The LV motion control system was found to have been functioning nominally, in line with the preset algorithms.”

With the root cause related to an error in the DM-03 documentation, resulting in up to two tonnes of additional LOX being loaded into the Upper Stage, making it too heavy, all elements of ILS’ vehicle were cleared for flight, with the launch date only delayed by a week.