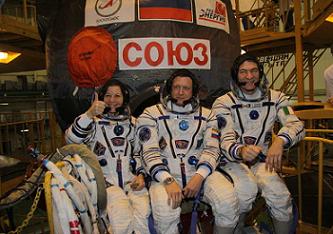 The Russian Soyuz TMA-20, also known by its US designation of 25S, lifted off from the Baikonur Cosmodrome in Kazakhstan on Wednesday at 7:09:25 PM GMT. Following a two-day free flight, TMA-20 successfully dock to the International Space Station (ISS) at the Mini Research Module-1 (MRM-1) Nadir port on Friday 17th December at 8:12 PM GMT.

The Soyuz’s arrival at the ISS will mark the first ever direct docking to MRM-1 Nadir, as the previous Soyuz to dock there, TMA-19/23S, was relocated to there from Service Module (SM) Aft. Following a 150 day stay at the station, TMA-20 will undock & return to Earth on 16th May 2011.

The previous Soyuz to launch to the ISS was TMA-01M/24S, which was the first flight of the new TMA-M variant. For today’s flight, however, the older TMA variant will be used. This decision was taken prior to the flight of TMA-01M, in order to allow sufficient time for problem solving or troubleshooting in the event of a problem with the new variant, without delaying any subsequent flight.

So far, the only major problem with the new TMA-M variant has been its “Neptun-ME” console, which failed during ascent. On-orbit crews have been conducting tests on the console, with preliminary results showing that it was a hardware-related problem.

During the most recent landing, Soyuz TMA-19/23S on 25 November, an atmospheric leak occurred between the Descent Module and Orbital Module (BO) of the Soyuz, which required several oxygen (O2) repressurisations. A set of expansive Space Station Program Control Board (SSPCB) notes – available in full on L2 – state that “later, it was determined that a sample valve that allowed a small amount of flow between the modules was out of configuration. The teams are looking at process improvements to ensure that this does not happen in the future”.

Soyuz TMA-20’s Descent Module was originally intended for Soyuz TMA-21, but was damaged during its delivery to Baikonur due to human error in the way it was loaded onto the train. Following the Descent Module’s arrival at Baikonur, engineers decided to swap it with the undamaged Descent Module from TMA-21, which was flown to Baikonur immediately.

The damaged Descent Module was sent back to its factory, where it has now been repaired and will be used for Soyuz TMA-21 in March 2011. This incident set the TMA-20 launch back by two days – from 13th December to today.

The Soyuz commander is 41 year old Russian Cosmonaut Dimitri Kondratyev, a pilot in the Russian Air Force. Kondratyev was originally assigned to the Prime Crew of Expedition 13 in 2006, but was removed from the flight in order to allow ESA’s Thomas Reiter to fly in his place. As such, Kondratyev will be making his first trip into space aboard TMA-20, thirteen years after his selection as a cosmonaut in 1997 – a length of time he himself has called “too much”.

Kondratyev will serve as a Flight Engineer on Expedition 26, and will become Commander of Expedition 27, following the departure of Soyuz TMA-01M on 16th March 2011.

NASA Astronaut Cady Coleman will be making her third trip into space and her first visit to the ISS on TMA-20, having previously flown on STS-73 in 1995 and STS-93 in 1999. Selected by NASA in 1992, Coleman is a retired Officer in the US Air Force, and also holds a PhD in Polymer Science and Engineering. Coleman celebrated her 50th Birthday yesterday. Coleman will serve as a Flight Engineer on Expeditions 26 and 27.

ESA Astronaut Paolo Nespoli will round out the TMA-20 crew. Born in Milan, Italy, the 53 year old Nespoli will be making his second trip into space and to the ISS on TMA-20, having previously flown on STS-120 in 2007, which delivered the Node 2 module to the ISS. Selected as an ESA Astronaut in 1998, Nespoli holds a Masters Degree in Aeronautics and Astronautics, and has a background in Special Forces operations for the Italian Army. In-keeping with ESA tradition, Nespoli’s mission has been named “MagISStra”. Nespoli will serve as a Flight Engineer on Expeditions 26 and 27. 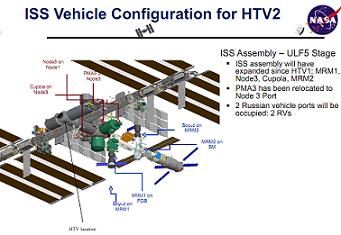 Massive internal activities will also be taking place inside ISS during this period, as the crews will have to work frantically in order to reconfigure the ISS’s interior following the addition of the PMM in February, in order to enable HTV-2 to dispose of a large amount of unneeded trash from the PMM when it departs in March. The Activation and Checkout (ACO) of two new science rack delivered by HTV-2, and the ACO of Robonaut 2 (R2) are also on the agenda during this time.