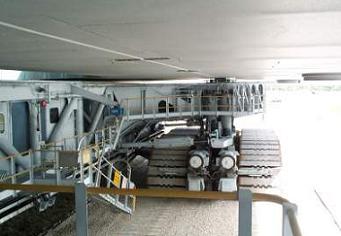 With Discovery now back inside the Vehicle Assembly Building (VAB), a preliminary timeline has listed January 13 as a preliminary target to return to Pad 39A in order to make the opening of the next available launch window, which opens on February 3. NASA managers will meet on December 30 to discuss the forward plan after inspections of all ET-137’s stringers are complete.

With both Endeavour and Atlantis now secured inside their Orbiter Processing Facilities (OPFs) for Christmas, Discovery will receive attention throughout the holidays, following her trip back to the VAB from Pad 39A on Wednesday.

The original rollback time of just past midnight on Tuesday was delayed due to an issue with the Crawler Transporter, resulting in a delay of just under 24 hours.

“During the climb up the pad slope, the CT JEL (jacking and leveling) system started reporting erroneous readings on one of the corners of the CT. After performing some initial troubleshooting, the team did not feel confident pressing ahead with rollback,” noted the NASA Test Director (NTD) report (L2).

“The Launch Director gave concurrence to scrub the rollback for the night. The CT team performed troubleshooting through the night. They believe the problem is a faulty transducer.”

With the problem confirmed as an erratic Height Transducer – a long silver unit attached to provide readings to the JEL system – causing the incorrect readings on Corner A of the CT, engineers took five hours to troubleshoot, isolate, obtain parts and complete the repair and retest.

With the transducer replaced and tested, rollback from Pad 39A began with first motion recorded at 22:48 Eastern, prior to arriving in the VAB at 7am on Wednesday morning. The trip took longer than normal due to an overheating bearing (B Outboard A-01), meaning several stops were required to lube and allow the unit to cool down.

The rest of the trip back to the VAB was conducted at a reduced speed to reduce the stress on the aforementioned bearing.

Once inside the VAB, Platform E and B extensions – along with ET Intertank access – were established in support of the ET stinger evaluation work, which will open with the removal of 89 sensors from two locations on the intertank, followed by backscatter and X Ray scans of the entire circumference of the LO2 and LH2 flanges.

“ET Stringer Evaluation: Foam cutting and instrumentation removal is scheduled to begin as soon as access has been established in the VAB. During the holiday break, 360 degree NDE (Non Destructive Evaluation) of LO2 and LH2 flanges will be performed,” added the NTD report. 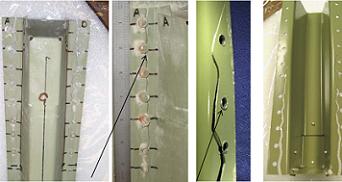 With the root cause of the cracks suffered by stringers S6 and S7 during the November launch attempt/tanking still unknown – resulting in an official classification of an “Unexplained Anomaly” on the latest documentation – the parallel effort to gain confidence in the stringers on ET-137 for flight rationale appears to be proceeding in a positive manner.

Although the results revealed a host of cracks in the Thermal Protection System (TPS) foam in the intertank stringer “valleys”, this is actually normal – as opposed to the large flange crack observed in November, caused by the two stringers under the foam cracking.

“There were 22 Intertank Stringer Valley cracks near the LH2 flange and 7 on the LO2 flange. All were present after the first loading except for one on the LO2 side. These are acceptable. None of the repaired areas on the LO2 flange exhibited any cracks or anomalous temperature gradients,” noted the FIT overview (L2).

On the instrumentation side, “nothing raised an eyebrow” on the results, which closely matched analytical data from computational models.

“Photogrammetry group says they’re confident they have good data for Panel 6 (-Z side). For Panel 2, they’re not as confident in the data due to unexpected camera movement. No deflection results yet. Thermocouples: Tanking Test data matches analytical data notionally. Slightly higher measured temperatures at steady state cryo compared to analytical predictions for both the flange and the stringer valleys. Strain gauges: Nothing “raised an eyebrow”. 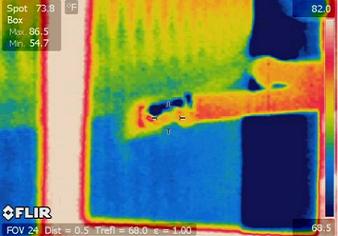 This in turn leaves the forward path clearer on returning to a launch posture, with confirmation on the health of the stringers yet to be inspected – due to the previous pad access issues – via the upcoming scans, prior to a decision point on potentially carrying out modification to the stringers.

“The ET-137 I/T Stringer Crack Investigation Team presented a progress report to SSP senior management. Initial analysis of the thermal and stress data from the tanking test confirmed the design of the SLWT (Super Light Weight Tank) is as robust as was originally believed prior to the stringer cracks,” added notes summarizing the SSP meeting. 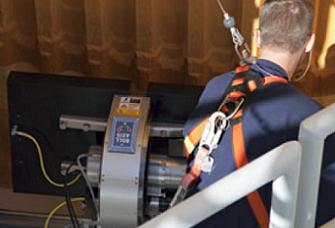 “Also, initial analysis of the deflection data from cryogenic loading indicates the predicted flange movement agrees with what the ARAMIS cameras measured at panel 6 on the ET. SSP management also discussed the work for the remainder of the year yesterday. The following is a general summary of the work to be performed once the vehicle is back in the VAB.

“Configure platforms and build access to all areas required. USA (United Space Alliance) personnel will perform NDE on the ET stringers. The program will hold a review on 12/30 to discuss the NDE results and the potential for any further stringer modifications or repair requirements. MAF (Michoud Assembly Facility) personnel would perform those repairs, which are to begin on 01/03/11.”

Even if a decision is taken to carry out modifications – with two modification options available (article to follow) – it would still remain possible to make the start of the February 3 launch window, as noted in a preliminary schedule (L2).

Firstly, the STS-133 stack would need to aim for a rollout back to Pad 39A by around January 13, which would allow enough time in the flow to return Discovery to start S0007 (Launch Countdown) operations at the beginning of February.

STS-133 would also need to pass two Delta Flight Readiness Reviews (FRRs), opening with the SSP FRR on January 20, followed by the Agency level FRR around a week later to confirm the launch date. The L-2 Mission Management Team (MMT) meeting would then follow on February 1.

All such dates are for planning purposes at this time, but raise confidence managers are hopeful that they won’t need to slip STS-133 to the next week at the end of February, unless additional time is required on work inside the VAB, or via flight rationale at the Program Requirement Control Board and FRR level.